Guth’s and designer Christian Schmidt’s concept is more sentimental than
Imperial, but not without relevance and effect. During the overture – brisk
and airy under Robert Ticciati’s guidance – we enter a world of whimsy, as
a digital projection unfolds the adventures of two young boys playing amid
the woods and beside the lake in a rural idyll with more than a hint of
resemblance to Glyndebourne’s own grounds. The faux chivalry of
sword-fights with sticks takes a more sinister turn when the boys stalk
wildlife, one with catapult a-ready. A shot is slung, and a bloodied magpie
is the result – a betrayal of trust and of nature.

Unfortunately, first-night flickers and blackouts made the visuals even
more distracting from the musical prelude than might have been the case;
and, it’s not immediately clear that these two lads are the adolescent Tito
and Sesto, whose friendship will be so tensely tested in the ensuing
operatic narrative. This is not just a matter of realism – Richard Croft’s
Tito looking at least one generation ahead of Anna StÈphany’s Sesto – but
also because there is no clear link between the on-screen Elysian fields
and the post-eruption ashes of the land of Vesuvian shadows which form half
of the set. It is only in Act 2, when the conflicted Tito must decide the
traitorous Sesto’s fate, that the parallels crystallise: the two young boys
escape from the digital celluloid and clamber through the rough reed beds,
ghostly representatives of disloyalty and division, who haunt their
subsequent selves with disturbing memories. 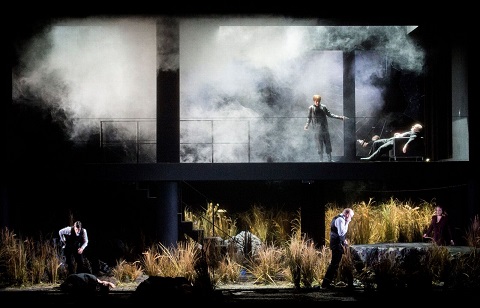 There is nothing Imperial about Schmidt’s split set: ravaged undergrowth –
presumably the foothills of the recently erupted Vesuvius, as lava rocks
and odds bits of furniture lay strewn – is juxtaposed with a grim, grey
modern corporate milieu which lies hidden above until the black projection
screen is lifted. There’s a lot of up and down, and upstairs/downstairs,
but Olaf Winter’s gloomy lighting is atmospheric and apposite, emphasising
the dullness and inertia of Tito’s political relationships and his own
disaffection with a power dependent on fear.

Guth’s Personenregie is not always credible. Vitellia cries ‘Come
here and embrace me,’ as she wanders off in the opposite direction from the
infatuated Sesto; ‘Come near me!’ Tito demands, as he and Sesto walk
backwards towards each other (tentatively, across an obstacle-strewn set –
which ironically almost wrong-footed some the production team during the
curtain calls), bump into each other and then lurch apart. When Sesto
refuses to divulge the reasons for his treason, Tito threatens his beloved
friend with a sickle, then uses it to scythe clumps of reeds which he
clutches to his chest. There is much synchronised choral semaphoring from
the ‘men in grey suits’ (both the gents and ladies of the Glyndebourne
Chorus being thus attired). 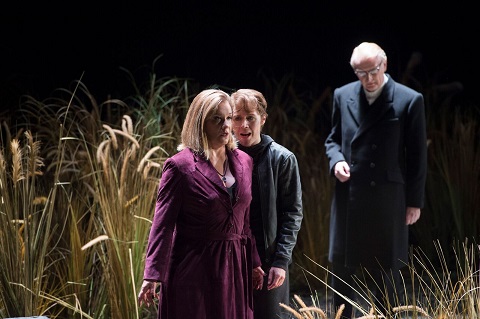 Fortunately, there is some excellent singing to distract us from the
irritating visuals. The withdrawal of the pregnant Kate Lindsay led
Anglo-French mezzo-soprano Anna StÈphany – originally intended for the role
of Annio – to step into Sesto’s shoes and her performance was simply
stunning. I missed StÈphany’s much-lauded Marschallin at the ROH (where I
saw a performance by the first cast), but I did admire her capricious Serse
in the Early Opera Company’s performance of Handel’s opera at St John’s
Smith Square last November. And, once again it was a true delight to enjoy
her exquisitely styled phrasing and expressive coloratura. The challenges
of ‘Parto, parto, ma tu, ben mio’ were met with ease, and the coloratura
was sweet-toned, as if overflowing with Sesto’s love for both Vitellia and
Tito – a love which was reflected in the beautifully played basset clarinet
obbligato. ‘Deh, per questo istante solo’, in which Sesto declares himself
deserving of death, vowing to take all the guilt upon himself, was equally
moving. Impressively, StÈphany made the role dramatically credible too,
plausibly treading the fine line between idealistic self-sacrifice and
all-consuming passion – a task made more difficult in a production where it
was not evident why anyone would fall so unreservedly under the erotic
spell of Vitellia.

The vengeful daughter of a deposed emperor who abuses Sesto’s love to gain
power and become Empress, Alice Coote’s Vitellia is clear ‘a baddie’ – a
gun-toting chain-smoker, she even has a purple coat. Less femme fatale than
a woman on the verge of a nervous breakdown, this vituperative Vitellia
seems to slide into hysteria, even psychosis, when she holds a pistol to
Sesto’s head to convince him to murder Tito. No one could accuse Coote of
lack of commitment and this was a heroic effort, but she was vocally taxed
by a role which frequently lies too high for her mezzo. In ‘Deh, se piacer
mi vuoi’ she pushed her voice hard, as Vitellia dreams of being Empress,
but the result was sometimes squally. In the revelatory ‘Non pi˘ di fiore’,
however, we finally enjoyed Coote’s lovely full, burnished lower register,
as Vitellia is enlightened, recognising the error of her ways. We, too,
were ‘enlightened’, as the aria was sung with the house lights on – another
technical hitch, or designed to suggest spiritual illumination in contrast
to the prevailing moral darkness? 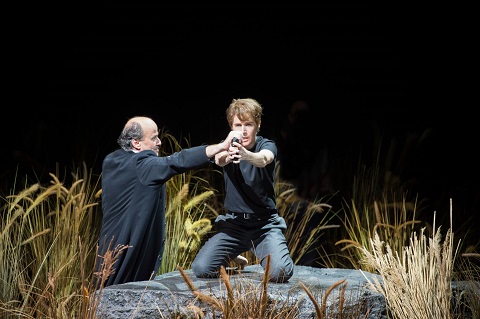 American tenor Richard Croft, following the withdrawal of Steve Davislim,
was a benevolent patriarch, singing with soft-grained lyricism and fluency,
although he wasn’t entirely comfortable at the top and had a tendency to be
ponderous in the recitatives. This Tito was deeply tormented by the
dilemmas he faced, as his innate compassion clashed with the magisterial
demands of office, but he lacked a certain aristocracy – an imperial
nobility which is essential if the qualms caused by his high-mindedness are
to ring true. Tito is magnanimous, but he is not meek. Moreover, by placing
Tito’s quasi-infatuation with Sesto centre-stage, the production neglected
the political context for the drama: it was not clear why Tito must banish
Berenice – we see her depart bearing two suitcases – whom he loves but whom
his nation will not accept as Empress, nor why having initially chosen
Servilia as her replacement, she too is rejected in favour of Vitellia. 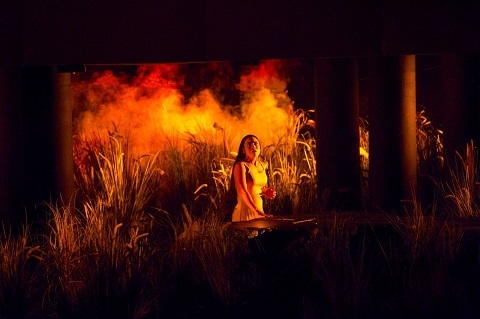 JoÈlle Harvey, who made a strong impression here in


three year ago, sang with stylishness and delicacy as Servilia, giving
depth to the slight role and pleading for Sesto’s life with heart-moving
earnestness in her final aria. Annio, the role originally intended for
StÈphany, was beautifully sung by Canadian mezzo-soprano MichËle Losier who
captured all of Annio’s loyalty and honesty.

The playing of the Orchestra of the Age of Enlightenment was tender and
spacious, though the ceremonial numbers might have had a little more
regality. Ticciati sensitively gave his singers the time they needed, but
there was occasional loss of momentum in the recitatives with too many longueurs and silences. Ashok Gupta (fortepiano) and Luise
Buchberger (cello), raised in the pit, were not once unsettled by the
hiatuses, however.

Some have seen La clemenza di Tito as a homage to Leopold II,
whose coronation as King of Bohemia the opera was commissioned to
celebrate; others, as a warning to pre-Revolutionary European rulers of the
dangers of the abuse of power. Certainly, contemporary political tensions
remind us of the need for leaders who will ensure the safety and security
of nations, as emphasised perhaps in the closing moments of this production
when Clive Bayley’s dark-voiced Publio – the unsettling, manipulative
commander of the Praetorian Guard – came out of the shadows to assume the
reins of power.

Another self-conscious directorial gesture, perhaps; but the superb cast
ensured that the sincerity which is at the heart of this opera was
preserved.