Given that the opera celebrates both individual freedom and the spirit of
collectivism – ‘A brother has come to seek his brothers, to help them, if
he can, with all his heart,’ sings Don Fernando, as he delivers his
gracious king’s order to ‘dispel the evil cloud of darkness’ which has
enveloped the populace and the prisoners – it must have seemed an apt
choice of work, exemplifying the very principles upon which the
Arab-Israeli project was founded.

Indeed, Fidelio can seem more an expression of ideas and ideals
than a drama about the lives of credible, three-dimensional individuals. As
such, it might lend itself more readily to concert performance than to
theatrical staging, and it was the former that we were offered at the Royal
Albert Hall in a performance by a cast of international soloists, the BBC
Philharmonic and the singers of OrfeÛn Donostiarra, under the baton of
Juanjo Mena.

Fidelio
– which falls between several stools: opÈra comique,
‘rescue opera’ (or, in German, Befreieungsgeschichte) and Singspiel – is often described as a ‘problem opera’ and one of its
sticking points is how to treat the spoken dialogue. On this occasion, the
spoken German was amplified, which created a disjuncture between the
various sections which form the whole and served to confirm that only one
of the cast had the vocal power required to reach the furthest corners of
the RAH. The dramatic veracity of the opera was also weakened by
the failure of the soloists, by and large, to interact with each other –
despite the fact that they were all (with the understandable exception of
James Creswell, deputising for the indisposed Brindley Sherratt) singing
from memory.

These minor misgivings, however, were unequivocally redeemed by the
performance of Stuart Skelton as Florestan, once again contributing in
utterly compelling fashion to the Proms’ Beethoven offerings following his
memorable performance in Missa Solemnis last year. There can be
few operas where the catalyst of the dramatic action is silenced for the
entire first half of the work; but, this means that by the time Act 2
commences, with Leonore/Fidelio fervently embarked on her rescue mission,
we are in a state of high expectation when we finally encounter the
shackled Florestan, languishing alone in the prison’s furthest, darkest,
dankest cell.

The BBC Philharmonic’s Act 2 orchestral prelude was cleanly and
expressively executed, the instability of the rhythmic fragmentations and
violent outbursts coalescing in the timpani’s disturbing tritone; but,
nothing could fully prepare for the almost existential anguish of Skelton’s
opening utterance, ‘Gott, welch Dunkel heir!’ (Oh, God! How dark it is!),
the first word swelling with searing courage and defiance, and then
depleting, an emblem of Florestan’s fading strength and hope. The
declaration that ‘Doch gerecht ist Gottes Wille!’ (God’s will is just!) was
assertive; the acceptance, ‘Das Mass der Leiden steht bei dir’ (He has
decreed the measure of my suffering) was, despite the vehement melismatic
twist, even and resigned.

Florestan’s liberator – his wife Leonore, disguised as ‘Fidelio’ – was
Ricarda Merbeth, who delivered a vocal performance which was secure and
disciplined, but who seemed reluctant to dare to complement her careful
vocal delivery with dramatic commitment. Leonore has a lot of persuading to
do. She must first don a male disguise with sufficient credibility to
divert the affections of Marzelline from her light-hearted lover, Jaquino;
then, she must insinuate her way into her husband’s prison by winning her
‘prospective father-in-law’s’ trust, and convince prison guard Rocco to
allow her to accompany him to the cells. Surely, Fidelio would at least
need to look at those whom she seeks to dupe? But, time and time again –
despite the efforts of Louise Alder’s open-hearted, responsive Marzelline
to engage with her new beloved – Merbeth stared straight ahead, as if
oblivious and immune to such attempts. This was most frustrating in the Act
2 ‘Melodram’ in which Fidelio descends to Florestan’s cavern and must
convince Rocco to employ ‘him’ as his assistant in the arduous task of
digging the long-confined Florestan’s grave.

That said, Merbeth’s vocal performance was solid, the tone rich and
rounded, if sometimes filled out with what I felt to be an overly wide
vibrato, and the role’s wide range caused no problems. In Leonore’s Act 1
aria, ‘Abscheulicher!’ (Monster!) the ungainly angularity of the vocal line
and the rapid runs and arpeggios – essentially instrumental in nature –
were used to create urgency and to convey the heroine’s struggle.

Creswell’s Rocco might have displayed more ‘oafishness’ but all credit to
the bass for this show-saving performance: Rocco’s ‘gold aria’ was a model
of bourgeois proselyting, and Creswell’s phrasing was eloquent throughout.
Detlef Roth’s Pizarro was a bit underwhelming; he needed darker vocal hues
to convey the prison governor’s malice and bluster, and to justify the
heckling of this reprehensible on-stage character – oh when will UK
audience’s cease this undignified practice? – which greeted Roth at his
‘curtain call’. (Mena stepped forward and whispered in Roth’s ear –
presumably to explain that the hoots were not a sign of audience
disapproval of his singing but rather a relic of pantomime heckling.) 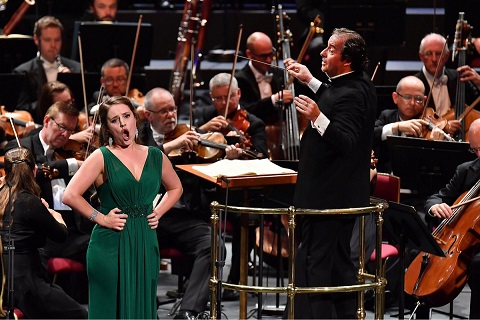 The younger soloists didn’t always have the heft for the venue but gave
intelligent, vocally assured performances. Louise Alder seems to have
limitless stamina and a musical memory as cavernous as Florestan’s cell:
following recent performances in the Cardiff Singer of the World Final, and
as Sophie in WNO’s Der Rosenkavalier, at the RAH she brought
Marzellina to life, and the contrast between her crystalline soprano and
Merbeth’s plumper, darker voice was effective. (The following evening,
Alder stepped in at the last moment to replace the indisposed Andrei
Bondarenko at the Wigmore Hall, where she’d performed earlier in the month
in a recital entitled ‘Schubert and Women’s Voices’.)

As Jaquino, Benjamin Hulett was a vocally attractive partner for Alder and
he imbued the spoken text with sensitivity and dignity. His opening duet
with Alder, ‘Jetzt Sch‰tzchen’ (Yes, sweetheart), made for an effectively
sunny contrast to the Hadean depths of Florestan’s underworld to come.

As Don Fernando, David Soar was alone in being able to (almost) match
Skelton’s projection, but he was more than a mere mouthpiece for royal
authority and his addresses to the people conveyed genuine benevolence and
fellow-feeling. As always, Soar gave an intelligent, considered
performance.

The men of OrfeÛn Donostiarra were solicitous rather than revolutionary in
tone in ‘O welche Lust’, and this helped Mena achieve textual clarity
through the Act 1 finale. Similarly, the voices of the individual prisoners
– Andrew Masterson (First Prisoner) and Timothy Bagle (Second Prisoner) –
were given space to emerge from the mass. For the final chorus, the men, in
evening dress, were joined by the women, in white, and we seemed to step
even further into the realms of oratorio.

Wilhelm Furtw‰ngler’s notes for his 1950 Salzburg production of the opera
declared, ‘Fidelio is a Mass, not an opera – its emotions touch
the borders of religion. […] After all we have experienced and suffered in
recent times, this religious faith has never seemed so essential as it does
today. … This is what constitutes the unique power and grandeur of Fidelio. […] What Beethoven was trying to express in Fidelio
cannot be encompassed by any form of historical classification but extends
beyond the narrow limits of a musical composition – it touches the heart of
every human being and will always appeal directly to the conscience of
Europe.’ Furtw‰ngler’s words carried the momentous burden of the losses and
atrocities of WW2, but the shadows cast by crimes against humanity are no
less lowering today. Mena refrained from hammering home heavy-handed
didacticism; but I did feel that, however ‘noble’, this performance lacked
dramatic intensity.