The leading roles were deluxe casting , the envy of any world opera house. There are few roles with more baggage than Turandot and Calaf. The legendary pairing of Nilsson and Corelli is still discussed in opera circles, and even if we never heard them live, their voices are still in our head. Too, Pavarotti owned the aria Nessun dorma, and even thought he didn’t do all that many performances of the full role, interpreters are judged against that gold standard. Happily, our title role interpreter and her princely suitor were up to the task.
Alexandra Lobianco is well remembered here for her feisty Minnie in a recent season. If Fanciulla is a Big Sing for the soprano, Princess Turandot is a Big Sing on Steroids. The fiendishly high, clarion singing required is balanced with the need for controlled delicacy after her conversion to a loving mindset. Ms. Lobianco is short of physical stature, but makes up for it with potent spinto vocalizing that has its own towering presence. As she kept pouring out laser-focused riddles, rising in pitch as well as intensity, we sat wondering: “Where is all that glorious voice coming from”? 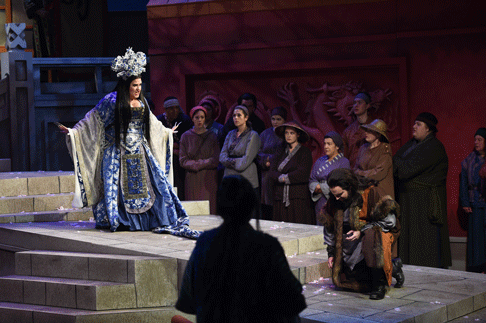 Later, after she is vanquished, Alexandra’s Princess was able to lighten and mellow her legato phrases to convey first crushing defeat, then willing acceptance. From hostility to acquiescence, from fortissimo to pianissimo and all points between, nothing about this taxing role eluded her. She has recently successfully debuted at the Vienna State Opera, and further stardom is surely to follow.
Jonathan Burton is a match made in heaven, having previously paired so wonderfully with this soprano in the Golden West. Mr. Burton sings this role as successfully as anyone around, with a firm, substantial tenor that has plenty of buzz and boom. When he is called upon to ride the full orchestra, stand back! He can pin your ears to the back wall. But he can also rein in his large voice to suggest a glowing lyricism that is irresistibly charismatic. Could lightning strike a third time, and could DMMO lure this perfectly paired duo back for yet another collaboration? Please, Opera God?
As the one sympathetic character in the love triangle, and with two memorable arias, Liu can often run off with the show, and Vanessa Vasquez gave her co-stars a run for their money. Ms. Vasquez is a major “find,” with a stunningly rich lyric soprano, leaning into the spinto territory. Her poised pianissimo flights above the staff were heart stopping in their beautiful timbre. Combined with her impeccable musicianship and endearing presence, Vanessa’s star is on the rise. 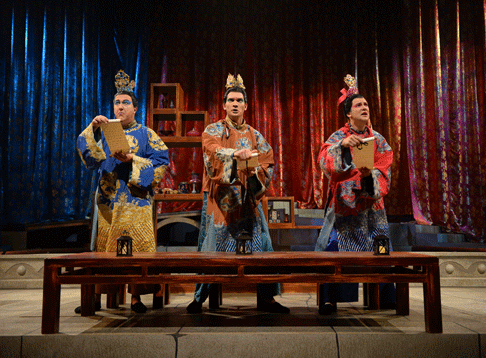 From Left, Pang: Brian Frutiger; Ping: Michael Adams; Pong: Chris Carr
Ping (Michael Adams), Pang (Brian Frutiger) and Pong (Chris Carr) were particularly well sung, with polished flair, and consummate beauty of line. While their movements and gestures were cleverly coordinated, and while they functioned beautifully as a unit, each proved an accomplished, distinctive soloist. Mr. Adams showed off an ample baritone with lustrous tone; Mr. Frutiger sported a gleaming, incisive tenor; and Mr. Carr’s pointed lyric tenor instrument provided much pleasure. As Timur, Federico de Michelis’ authoritative, freely produced bass suggested a gravitas beyond his years. Similarly, young Ryan C. Connelly, decades too young for Emperor Altoum, successfully colored his pleasantly reedy tenor to cunningly suggest an aged monarch. As the Manadarin, Timothy Bruno chanted his pronouncements with solid authority.
Lisa Hasson’s superb chorus was the last major “cast member” and they sang with wondrous character and musical sweep. In such a modest sized house, this was the closest to operatic Surround Sound we might ever experience. The goose bumps are returning even as I write.
Music Director David Neely conducted his amassed forces with a loving, knowing baton. DMMO populates its pit with highly accomplished professional musicians from throughout the region (and beyond) and their incisive playing is second to none. The orchestra was a compelling partner in the musical drama, and they rose to meet every challenge. 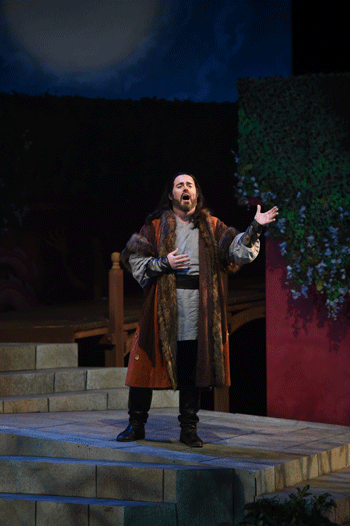 Jonathan Burton (Calaf) sings “Nessun Dorma”
We have come to expect so much from DMMO that is innovative and forward looking, that it is a gentle surprise to find that this production of Turandot was more an homage to a glorious past. R. Keith Brumley’s handsome set design was wholly functional, suitably Chinese, and cleverly varied. A long set of stairs and platforms bisected the main stage from high up left to stage level stage right. Towers, drapes, and insets were moved in and out to suggest other locales, but his was one of those basic ‘unit foundation’ sets necessitated by budget realities in the 70’s. The effective costumes were courtesy of Mary Traylor and Lyric Opera of Kansas City, while Barry Steele contributed a straight-forward, well executed lighting design.
Director Stephanie Sundine has done a good job managing traffic (no small feat), and underlining the important Big Moments. Liu’s suicide had an admirable clarity and focus. But (pace Puccini) Turandot is not always dramatically propulsive, and there are stretches of (albeit beautiful) music where nothing of consequence is happening. Ms. Sundine did not completely solve the visuals of these slack moments, and too often the chorus was posed in pleasant rows, with principals left to look ‘interested.’
Small matter perhaps, as in a prima la voce mind set, this Turandot was a night to remember, and cherish.
James Sohre