While its three main stage productions continue to be performed in Blank Performing Arts Center on the Simpson College campus, 30 minutes away in Indianola, DMMO systematically develops audiences by mounting innovative smaller productions of non-standard repertoire in the heart of Iowa’s capital city. The success of this outreach is attested to by consistent sold out runs of these innovative projects.
Maria was presented in the historic Temple for the Performing Arts, which proved to be a most congenial fit. Set designer Adam Crinson has created an effective environment to enfold the action, with large, framed rectangular collages of distressed wooden window shutters spaced throughout the sides of the auditorium. Selected front row seating was at tables and chairs, with some also spilling up onto stage left, suggesting a tango nightclub venue. Mr. Crinson carried the distressed wood look into the backdrop, which was constructed of vertical slats topped by a wide, textured fabric wall hanging. A matching proscenium treatment, and rolling bar unit stage right completed the simple, limited, but eminently practical playing space.
Nate Wheatley has contributed an inventive lighting design that beautifully serves the dramatic, brooding text and music. The afore-mentioned ubiquitous panels each had individual lights installed at the top, which could alter the color wash to suit the mood. Above the stage hung variations on white globe ceiling lights, which could also change hue. Mr. Wheatley managed to alter the general area lighting with good success, although he was likely restrained from adding more specials by the limited number of instruments I counted. One effect that paid off handsomely was the tight center aisle spot that allowed Maria to wander into the audience during her penultimate number. 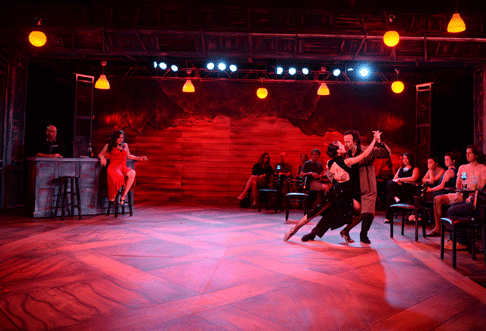 Astor Piazzolla’s “Tango Opera”
Heather Lesieur and Atlanta Opera are credited with the spot-on, character-specific costumes, a stunning array of jewel tones and reds. The selective use of masks and primitive props added to the gritty ritualistic tone of the storytelling, which was staged with inventive mischief by director Octavio Cardenas.
Mr. Cardenas embraced the composition, and acknowledged that it is decidedly not a linear tale. He created a 90-minute series of constantly morphing impressions, characterized by fluidity of motion and variety of theatrical effects. He seized on the rampant symbolism and distilled it into comprehensible dramatic points. Octavio used the entire space as his canvas, with actors entering and exiting from every nook and cranny, meticulously coordinated, but nevertheless suggesting a spontaneous, immersive theatrical experience.
The distinctive score was conducted with aplomb and incisive rhythmic propulsion by Stefano Sarzani, who numbered several Piazzolla “specialists” in his small orchestra: Daniel Binelli (Bandoneon) Polly Ferman (Piano) and Scott Mateo Davies (Guitar). All of the instrumentalists performed with real distinction for Maestro Sarzani, whether as part of a tightly knit ensemble or as featured soloist, often playing with raw energy. That said, I sometimes wished the subtle, tasteful solo violinist had summoned a little more zesty sass in the jazzy licks. 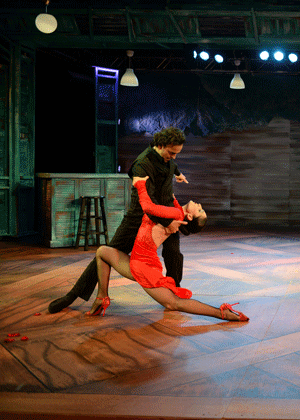 Tango Dancers Jairelbhi Furlon and Guillermo Merlo
The band was stage right of the proscenium, and was sometimes part of the action. The interplay between bandoneonist Binelli and the narrator was especially witty. The sound palette of this unique musical world was consistently on point, and the band partnered exceptionally well with the singers and dancers. I only wish that the actors hadn’t been miked. The volume was half again as much as was needed, if it was indeed really needed at all. No matter where a performer was sanding on stage, the voice seemed to be coming from the top center of the proscenium. Perhaps this could be adjusted for remaining shows.
Even with that caveat, from her first appearance the stunningly attractive Elise Quagliata owned the title role. The part mostly lies in the low register, where Ms. Quagliata’s searing chest voice made a powerful effect. It may have been the amplification, or the mix, but in the first scene she sounded just a bit pressed, the tone tending to harden as she took a belting approach to the writing. However as the evening went on, Elise quickly relaxed the delivery, finding increasingly more legato that showed off her poised tone to perfection in a wide range of demanding emotional states. Dramatically and musically, she does not so much perform the part as inhabit it. A remarkable star turn.
Rodolfo Nieto’s El Duende (The Goblin, as narrator) is marked by a sensitive, impassioned delivery that too, is hindered a bit in his effect by the volume knob. That Mr. Nieto nonetheless makes an imposing, invaluable narrator is owing to his charisma and dramatic stature. As El Payador (Cantor or Minstrel) baritone Ricardo Rivera made the most of the diverse vocal demands, offering suave vocalism of the first rank whether investing introspective phrases with a haunting grainy quality; slamming out declamations above the staff with ferocious power and accuracy; or spinning out creamy melodies with a melting arch of gorgeous sound.
This piece is billed as a tango opera, and there are plenty of such moments to savor as a lithe pair of dancers, Jairelbhi Furlong and Guillermo Merlo, found a diverse array of effects with which to engage and delight us. Performing their own inventive choreography, the duo skillfully incorporated select props into their routines including a red scarf, an A-frame ladder, and best, a man’s suit jacket which they kept passing back and forth by inserting arms in empty sleeves. Yahaddabethere! Their every duet was rapturously received.
With this memorably stylish, cheered-to-the-rafters production of a seldom performed jewel, DMMO reminds us yet again why they are one of the most invaluable regional companies in the nation.
James Sohre

All photos by Duane Tinkey