We thereby run the risk of becoming ultimately almost as
conventional as those we think we have left behind. I shall happily admit that
I have been wrong, should I see this staging again, crack the code — if
code there be — and find greater enlightenment than I did on this
occasion. As it stands, however, I found myself somewhat disappointed by a
staging that seemed to pale beside Castellucci’s fascinating
Paris Moses und Aron — to which there were perhaps a few too
many visual resemblances for comfort, let alone provocation — or indeed
to what I know of his other theatrical work. That Castellucci has thought
intelligently about Tannhäuser is clear from an interview in the
programme; I wish, though, that there were more of a sign, at least to me, that
such thoughts had made their way into the staging. There were times, I am
afraid, when this production, for all its stylised, internationalised
‘beauty’, veered close to the merely boring. 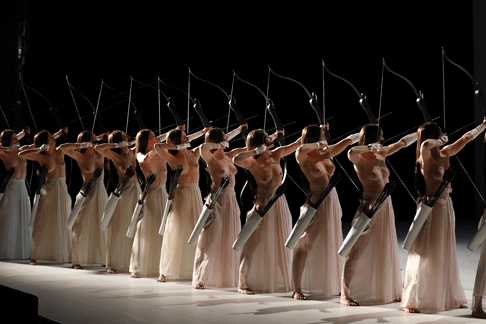 The setting is almost brazenly non-specific. There is nothing intrinsically
wrong with that, especially when Wagner himself treads the line between myth
and ‘historical’ drama. An air of mystery, even of mystification,
concerning where we are, who these people may be, is in many respects welcome;
not everything need be set in a present-day or time-of-composition warzone. The
sinister quality of strange rituals is palpable. Is there perhaps a hint of
ISIS or some such in the cult-like environment of the world beyond the
Venusberg? Perhaps, but it all begins to look a little too much like the world
we had seen in Moses and, more to the point, so what (without anything
more on which to go)? Is there not a hint of Wieland Wagner without the content
— he himself has often been accused of having, for ideological reasons,
divested his grandfather’s dramas of much of their content — and in
the achingly fashionable, yet vacuous, scenic language of the modern corporate
art installation? Unlike many operagoers I am not, I hope, one to roll my eyes
at the mere mention of interpretative — or non-interpretative —
dance, but does the beautifully choreographed movement do anything more than,
well, be beautiful? Is that the point? It may well be, but at some point, might
it not be argued, or at least demonstrated? Or am I again missing the point,
hidebound by my own, doubtless Teutonic or even Socratic preconceptions?
Designers — Castellucci is to an extent his own — have their tics,
of course, their house styles; but what is the idea, even the Idea, shrouded,
often literally, by the undeniable style? 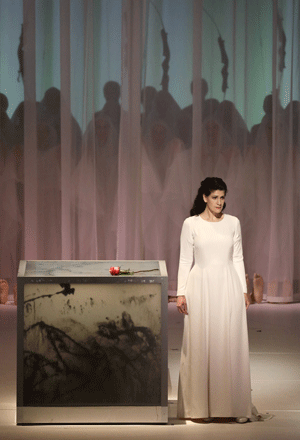 Great play — great scenic play, at least — is made of the
kinship between the harp of the Minnesänger and the crossbow of
the warrior. It is an interesting idea, not least in this most dualistic
— at times, catastrophically if fascinatingly so, in dramaturgical terms
— of Wagner’s operas. (In Tristan, even, there is more
mediation than here, and it is of course infinitely more accomplished not only
than Tannhäuser but than most other human drama in giving the
appearance of reconciliation even when ‘reality’, whatever that may
be, belies that appearance.) Alas, it never really progresses beyond a few
striking visual signs, whereas an explanation, not necessarily didactic, of the
relationship between art and war, love and death, is surely invited here. Even
the ugliness of the fatty mound that is the Venusberg and its outgrowing
creatures — the decay of boredom, satiation, and so forth, I presume
— is so ‘beautifully’ stylised as to lose its dualistic edge.
Or did it never have that edge in the perfect place? Lacan is clearly going
round and round here, but is anything more than that happening? Again, is that
the point? The second act has a great deal of slow business with people almost
losing themselves in curtains; well, not a great deal, just much repetition of
a little business, really. There is something intriguing about whether that
mysterious thing is, flailing, writhing, maybe writing, in the central box, on
which the singers’ principal concepts are inscribed; at the same time,
there is a little, however inadvertent, of a Dr Who monster to it
too.

I have no idea why the tombs in the third act are inscribed
‘Anja’ and ‘Klaus’ rather than ‘Elisabeth’
and ‘Heinrich’; whatever metatheatrical point may have been made
quite eluded me. Likewise the passing of increasingly absurd increments of
time, signalled in an o-so-‘beautiful’ typeface: from one second,
to endless milliards of milliards of years. Meanwhile corpses rot —
beautifully, tastefully, needless to say. The actual singers look on and
occasionally move around. Eternity, perhaps, although it never actually reaches
that state? Is that, again, the point? Is there a role for history after all? I
certainly hope so, in this most Hegelian of composers, but I am afraid I had
simply ceased to care. Having opened by saying how different
Castellucci’s aesthetic was from what we tend to see in opera, I have to
admit that the results, if not the intent behind them, were in some respects
not so very different from
Sasha Waltz’s explicitly balletic production (verging on
non-production) for the Berlin State Opera. As I said above, I should be
delighted to be proved, even to prove myself, wrong; none of us is infallible.
I did so over
Frank Castorf’s Bayreuth Ring. Perhaps I simply need to
immerse myself more in Castellucci’s way of thinking; or perhaps this was
not his finest hour. Time will tell.

We need await no passing of time to reach some sort of critical judgement on
the musical side of things: never less than good, in some cases quite
outstanding. I do not think Tannhäuser is really the role for Klaus
Florian Vogt; Lohengrin is. And yet, the unearthly, almost pre-pubescent (on
steroids) beauty of the voice can bring fruitful contradictions of its own,
intentional or no. What if Tannhäuser is just an overgrown choirboy after
all? Vogt certainly has the stamina for the role, and can sings its notes
— even if he relied a little too much, especially during the first act,
on the prompter, whose sibillants were almost as audible as Vogt’s own.
Anja Harteros gave an excellent performance, although I could not help but
think that this was perhaps not quite the role for her. She seemed almost as if
she would have been happier singing Verdi; at any rate, she gave the impression
of trying to play a ‘character’, which Elisabeth is perhaps not, at
least in a straightforward sense. Whatever Tannhäuser may
involve, it is not straightforwardly a world of psychological realism.
Christian Gerhaher’s Wolfram was at least as beautifully sung as any

I have heard from him (which is saying quite something indeed). It was not
just beautiful though; there was an edge, an anger even, suppressed or
otherwise, which had the character, such as he is, become more rounded, more
interesting than I can recall. Elena Pankratova’s Venus was finely, even
movingly, sung, her reappearance in the third act from on high (unseen) quite
magical. Georg Zeppenfeld’s Margrave and Dean Power’s Walther von
der Wogelweide also stood out, making the most of their roles without
exaggeration. Choral singing, once again, was quite outstanding, a tribute both
to members of the chorus and to Soren Eckhoff, their chorus master.

Last but certainly not least: Kirill Petrenko’s direction of the
outstanding (once again!) Bavarian State Orchestra, whose depth and variety of
tone are truly second to none. Petrenko’s way with the score is anything
but conventional, without ever so much of a hint of being
‘different’ for the sake of it. If my preference, lazy or
otherwise, is for the more overtly symphonic line a conductor such as Daniel
Barenboim brings to this music, Petrenko’s insistence upon the
individuality of ‘numbers’ — which to all intents and
purposes they are, or at least can be — within the score reaps its own,
explicitly musico-historical rewards. He has clearly thought about each
section, however defined, and how it might characterise it — and,
moreover, is able to do so. The Overture, for instance, began in surprisingly
Mendelssohnian fashion, blossoming, expanding into something more, as if to
suggest Wagner finding his way from roots he may or may not have wished to
acknowledge. In the second act, Wagner’s antecendents in French opera,
not least Meyerbeer, came very much to the fore, without loss to a greater
sense of the whole. The third act was more truly ‘symphonic’; here,
one felt, the Wagner of the music dramas proper had arrived. Fascinating,
instructive, provocative in the best sense: more so, alas, than what I was able
to glean from Castellucci.