Sally Jacobs’ drum-shaped balconies create a frame for Puccini’s enigmatic,
imperfect masterpiece, the onlookers forming a sort of Greek Chorus,
watching the horrors unfold. Baying for blood like sadistic spectators at a
gladiatorial arena, they roar with relish in the opening scene as the
Mandarin reads his proclamation of the impending execution of the Prince of
Persia.

Despite the passing years, the oriental stylisation – visual and kinetic –
remains striking. Giant, grimacing severed heads top towering poles, their
blood-red streamers testifying to the agonies suffered by Turandot’s
decapitated suitors. The Mandarin mounts a rolling tower to thunder his
edicts and incite the crowd’s bloodlust. Emperor Altoum floats down from
the fly-loft on a cloud-cushioned golden throne. There is a mammoth gong, a
scything executioner’s sword, a giant whetstone transported on an elaborate
dragon-cart. When the sky grows dark, in anticipation of Turandot’s
delivery of her tyrannous decree, the Chorus’s invocation to the moon
initiates the descent of an immense canvas moon which eclipses much of the
stage. 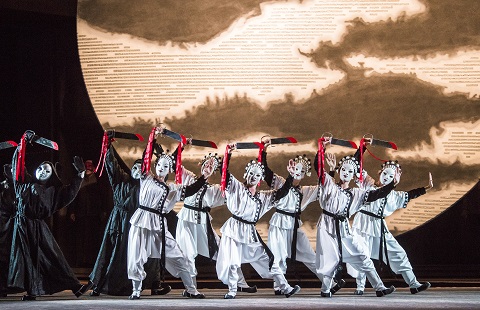 Revival director Andrew Sinclair has done a good job, working with original
choreographer Kate Flatt, to ensure that the t’ai chi-based movements of
the white-masked dancers are slick and fresh. Those ‘grotesque
imperial ministers’, Ping, Pang and Pong, cavort with commedia
-like outlandishness – perhaps a reminder that the inspiration for
Puccini’s opera came from a commedia dell’arte play written in
1762 by Carlo Gozzi, which itself drew upon ‘The Story of Prince Calaf and
the Princess of China’ from a collection of Persian fairy tales, The Thousand and One Days.

Indeed, this dialogue of cultures is relevant, for while the production
resonates with myth and ritual, it’s a bit of a hotchpotch, with ‘oriental’
interpreted rather loosely (there’s a nod, surely, to Japanese Kabuki and
Noh theatre), as well as a few touches of Brechtian alienation. But, this
doesn’t really matter; after all, Puccini’s score is itself eclectic and
episodic, juxtaposing a plurality of styles and allusions. If Serban and
Jacobs have assembled a cultural smorgasbord, then it’s a beautiful and
enchanting one; and the visual beauty is often powerfully and disturbingly
at odds with the barbarity of the drama.

It also makes a loud impact. In Turandot, Puccini calls
for huge orchestral resources, both in the pit and on stage, and conductor
Dan Ettinger lets his instrumentalists off the leash. Seated in the Stalls
Circle, I’m sure I felt the auditorium tremble when the death-knell
drumming pounded during Turandot’s pronouncement of the riddles, and in Act
2 the brass blazed with imperial majesty. Ettinger might have reined things
in a bit at times – the ‘power’ of the score was generated by turning the
volume up as far as it would go, rather than through surging, well-crafted
fullness of sound – as the singers were required to project over
unalleviated orchestral swells.

Fortunately, the principals had the necessary vocal strength and stamina.
Christine Goerke used her huge voice to capture the heartlessness of the
unsympathetic ‘heroine’, who in Serban’s vision is an icy she-devil who
delights in sending her hapless suitors to their grisly deaths. Goerke
began ‘In questa reggia’ a little cautiously but as she proclaimed the
three enigmas there was no doubting Turandot’s venom. Goerke’s soprano
gained in focus as the performance proceeded and she was at her best in the
final act, her voice sonorous and gleaming. There was little sense, though,
of the princess’s ‘inner life’; perhaps, this inevitably remains an enigma
– the opera’s unanswered riddle -but if we are to believe in Turandot’s
redemption then surely we need to be permitted a little intimacy with the
workings of her soul? 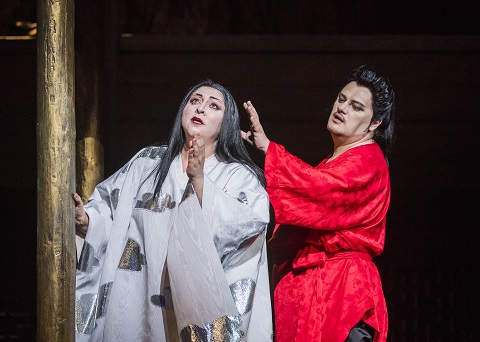 Aleksandrs Antonenko was a heroic rather than chivalrous Calaf – no-one
would have any chance of forty winks during this ‘Nessun dorma’ – but he
placed the notes with control and pushed through the soaring lines with
warm amplification. Antonenko’s didn’t really bother to act, though the
large props and choreographed acrobatics didn’t leave much room for subtle
engagement between the characters. In any case, it’s hard to make Calaf’s
sudden enthrallment to Turandot’s ‘charms’ credible, and Antonenko was a
fittingly gallant hero who brought daylight back to Turandot’s
night-dominated realm and restored the patriarchal gender hierarchy. 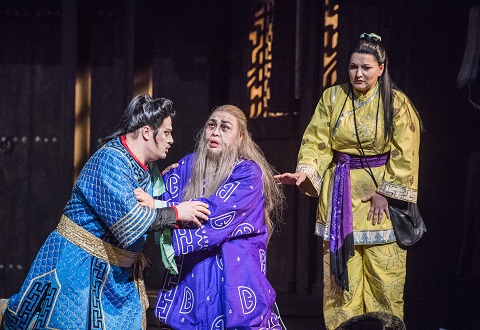 Yury Yurchuk was an authoritative Mandarin, though I thought that In Sung
Sim’s Timur needed a bit more nobility and stature. Robin Leggate brought
out the Emperor’s gentility and regretfulness, in contrast to the vicious
cruelty of Ping (Michel de Souza), Pang (Aled Hall) and Pong (Pavel
Petrov), who formed a well-integrated trio but had little to distinguish
them as individuals. 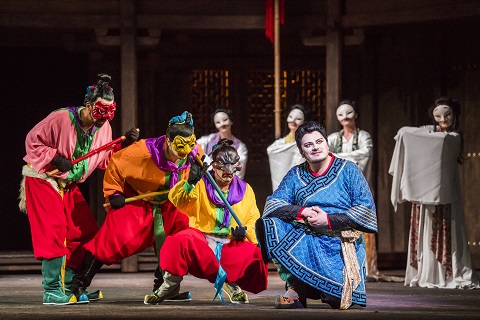 The main weakness of Serban’s production is that it denies us understanding
of the causes of Turandot’s apparent inhumanity, and thus makes her
atonement less convincing. The narration in which she explains the reasons
for her misogyny, should make us understand that she speaks as an avenger,
as one whose ancestress who was raped and murdered thousands of years ago.
As one whose violence is retribution for the violence done by men to all
women; as one determined to the be agent of her own destiny. Serban creates
little sense of the emotional energies which drive the drama and shape the
dynamic between Turandot and Calaf. And, the sense of emotional stasis is
exacerbated by the literal stasis of the chorus – a result of lack of time
to stage the Chorus in the hasty run-up to the production’s premiere as
part of the 1984 Olympic Arts Festival in Los Angeles – though the ROH
Chorus were, as ever, in tremendous voice as they expressed their perverted
pleasure at the executioner’s bloody deeds.

Despite this misgiving, this production just about avoids the composer’s
own tendency to indulge in kitsch and offers fairy-tale spectacle with some
spectacular singing. A real summer treat.