Yet one senses throughout Beethoven’s inexperience with the operatic
genre. He toiled on Fidelio for over a decade, through three
versions and four overtures, complaining that it would have been easier to
start over. The result bears the marks of a struggle, not entirely successful,
to impose coherence on conflicting plot elements and musical styles.

The bourgeois domesticity with which the opera begins—based on a
trivial matter of unrequited petit-bourgeois love—alternates, often
abruptly, with the universal struggle for political justice against tyranny.
Beethoven increasingly came to see the latter as the opera’s real theme;
it is no coincidence that the real-world story that inspired the libretto took
place during the Reign of Terror in 1794. Yet he never entirely erased the
traces of the previous, more prosaic theme. 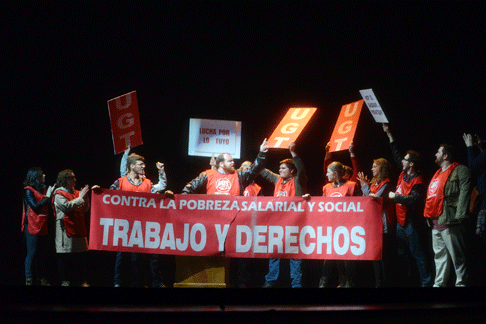 Of course the personal and the political are connected: in order to fight
for universal human rights, Beethoven seems to be saying, we must transcend
more immediate concerns about material comfort, family attachments and personal
safety. Or, more subtly, we must learn that a genuine commitment to the welfare
of those in our immediate surroundings may well imply that we struggle for
universal justice.

Yet Beethoven never entirely succeeds in weaving the personal and the
political into a coherent musical tapestry. Fidelio set a
new standard for music of heroic grandeur: at its best, it nobly portrays
secular idealism by drawing on elements of religious music, as in numerous
choruses and the solo numbers of Leonore and Florestan—and, later, in the
Ninth Symphony. Yet the opera also contains numerous Singspiel, opera
buffa and spoken elements that seem to have parachuted in from
another opera. Struggling to combine the two types of expression,
Beethoven’s score repeatedly thrusts powerfully forward and upwards only
to be brought back down earth by comic relief, lighter music, and spoken
dialogue.

These awkward tensions have an important implication: a great live
performance of Fidelio demands that performers infuse every
moment with vocal and orchestral conviction so powerful as to sweep away all
hesitations and misgivings. In the mid-20th century, many
treated Fidelio as a grand symphony and looked to great
conductors to supply this forward impetus. 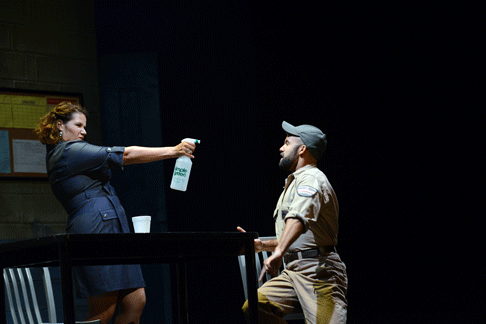 In this spirit, conductor Richard Tang Yuk, director of the Princeton
Festival, invoked the admirable tradition of inserting the
epic Leonore Overture No. 3 before the final scene—a
practice now threatened by musical literalism, short audience attention spans,
and union wage scales. Here, as elsewhere, the slimmed-down orchestra played
smoothly and surprisingly error-free throughout. This is no small feat, as the
score contains cruelly exposed wind parts that occasionally embarrass even the
world’s greatest musicians.

Yet interpretively, the orchestral playing was less than the sum of its
parts. Yuk’s approach to the score—as has been true before in
Princeton—tends to privilege smoothness and accuracy over energy and
attack. He selected cautious tempos and smoothed Beethoven’s dynamics to
the middle of the spectrum. The overtures and the opening to Act 2 were
lovely in places but lacked sweep and drama. A more impetuously inflected
approach to the orchestral score, as Beethoven himself reportedly conducted it,
would have been welcome—even at the cost of a few more bloopers. The
orchestra was also generally too loud when accompanying singers and too soft
(or improperly accented) in grand orchestral moments like the Leonore
No. 3.  The dynamics in the vocal score—except in a few
exceptional numbers—tend to be p or pp when anyone is singing, and marked
louder and regularly punctuated by Beethoven’s distinctive accented
dynamics (sfp and fp) when he wants the orchestra
to be more prominent.

The primary responsibility for bringing this Fidelio to
life, therefore, fell on the singers. The Princeton Festival casts solidly and
this year it assembled seven vocalists, each of which is the model of the
modern American singer. Armed with degrees from top conservatories, competition
awards, and experience in young singers’ programs, most are now in their
30s, working their way up in a tough profession. At major houses like the MET,
they sing comprimario roles or cover more established
colleagues; at regional companies, they sometimes assume lead roles. Most also
do concert or Broadway work, and several have foreign experience. 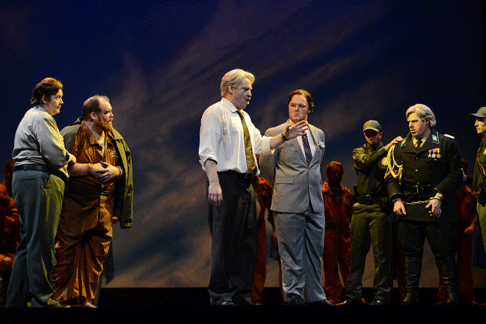 By far most impressive among them is Noah Baetge. From the first word of
Florestan’s Act II recitative—a striking messa di
voce from pianissimo to forte and back on
“Gott!”—he displayed a voice of potential greatness. I have
rarely heard any tenor, live or in recordings, so effortlessly navigate
Beethoven’s unforgiving heights, to which Baetge adds heroic brilliance,
a sweet timbre and spot-on intonation. A bit more weight in some swiftly moving
passages lower down and better German diction (especially spoken) would have
rendered this performance worthy of a major house. I have not heard such a
thrilling voice in live opera in Princeton since the young Lisette Oropesa
appeared a decade ago in Lucia di Lammermoor—a role she
reprises this fall at Covent Garden.

Raised in Chicago and now based (like Baetge) in Seattle, Soprano Marcy
Stonikas has sung Leonore at the Vienna Volksoper. She deploys a voice of
considerable weight with conviction. For lack of more freely soaring high notes
and warmer low ones, and a general cautiousness of utterance, the character of
Leonore never came entirely to life.

The rest of the cast sang with uniform professionalism. Norwegian-American
bass Gustav Andreassen made a solid Rocco, even without the warm bass, crisp
articulation and clear diction appropriate to his voluble paternalism. Soprano
Danielle Talamantes (a graduate of nearby Westminster College) and tenor
Michael Kuhn (who appeared in “A Little Night Music” last year in
Princeton) waxed passionate as Marzelline and Jaquino, even if somewhat they
lacked some smoothness and charm. (Kuhn, an experienced Broadway singer, did
act convincingly.) Pennsylvanian bass-baritone Joseph Barron, returning after
“Peter Grimes” last year, chewed the scenery as a truly villainous
Don Pizarro. Cameron Jackson, still attending graduate school in North
Carolina, presented a believable Don Fernando. The chorus sang lustily, with
fine solos from the two prisoners. 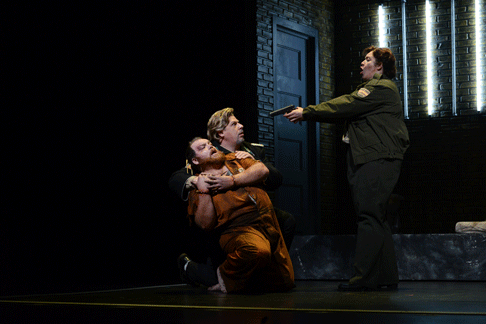 The Princeton Festival’s long-time stage director, Steven
LaCosse, set the action in modern Spain, with Florestan as a union
organizer, Rocco as an older prison warden, Marzelline as his daughter, Jaquino
as a janitor, Don Fernando as a prime minister in a fancy grey suit, and so on.
Some of the resulting dramatic action, especially in Act I, was remarkably
convincing to a modern audience.

While I deplore, for example, the modern habit of distracting audiences by
“staging” overtures and “entre’acts” behind a
scrim. (This is particularly annoying when the music from which one is being
distracted is a timeless Beethoven overture.) Yet I must admit that this
approach worked well: during the Fidelio overture, we saw
Florestan being arrested for holding a union meeting and during
the Leonore No. 3 we saw loved ones greeting the freed
prisoners one-by-one as they emerged from the subterranean prison. Both
stagings tastefully went dark at the recapitulation, giving music lovers their
moment, too.

Similarly impressive was the use of class distinctions to underscore
conflicts, as with Marzelline’s unwillingness to give Jaquino the time of
day apparently because he is a custodian. For the first time ever, I heard an
audience actually laugh at the comic interchanges in the first scene. And
amidst the concluding jubilation, I appreciated the conceit of the lead
characters giving brief TV interviews.

Otherwise the sets honed to the successful formula of opera at the Princeton
Festival: simple, suggestive, realistic and brightly lit. One suggestion for
the future. It is always worth the expense—especially in a hall like
Matthews Theater, with exceptionally harsh and cold sound—to create
acoustically resonant scenery. Above all, that means avoiding
“open” sets (scenery without backs, sides or a top), which project
substantially less vocal sound to the audience (up to 25% less, according to
some studies). This surely contributed to the persistent imbalance between
orchestra and singers—except in the case of Noah Baetge, a singer I hope
to hear again soon.

Overall, with this Fidelio Princeton Festival extends a
string of remarkably accomplished and successful operas—an impressive
achievement not least because each production receives only two performances.
The audience, which filled about ¾ of the hall, responded
enthusiastically.