This new production by the Aix Festival was awaited with bated breath, Tcherniakov no stranger at the Aix Festival with two recent, unforgettable Don Giovanni under his belt, and the Aix Festival debut and role debut of conducting star Pablo Heras-Casado.
The euphoria and the dangers of imagining Bizet’s Carmen have long challenged avant-garde directors, among notable examples in my experience the by now historic stagings of Harry Kupfer and Calixto Bieito. The bar has been set always deeper into re-imagining the piece, and now Dimitri Tcherniakov has simply knocked the bar off its pinnings. 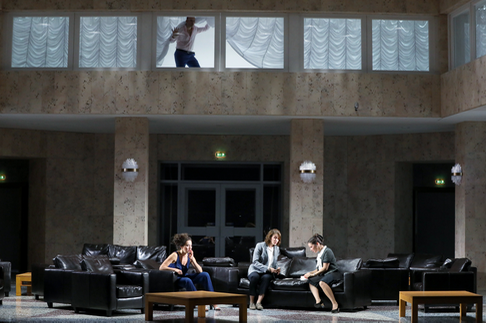 The card trio
Tcherniakov’s Carmen is no longer Carmen. It is the naked destruction of a human psyche, Carmen is merely its means. Layers of emotional bravado are meticulously stripped away within Tcherniakov’s chamber of horrors, a type of corporate-style self-improvement sanitarium. Not only the male anima is destroyed by an unfathomable sensation of maybe love, so also is the female anima destroyed. The tragedy sinks to the most elemental level of human existence, feeling laid bare. It is ugly, not cathartic.
To get there Tcherniakov has constructed a witty platform that ruthlessly plays with Bizet’s opera, and plays with us, challenging us to make it into a Carmen. Maybe you will be able to — there are five more performances and the production will travel to Luxembourg. I could not find a Carmen, this staging was not a real, working metaphor. But yes, the experience was pure gesamtkunstwerk, and high art, very high art.
Conductor Pablo Heras-Casado gave corpus to the stage. It was orchestrally full-throated, forcing out always intense feeling, i.e. the ultimate emotional elaboration of every melody, and the uncovering of emotional depths by laying bare the inner workings of Bizet’s harmonies and structures (who knew they were so incredibly rich). He took the Seguidilla to impossible hysterical frenzy, rendered the third act idyll as intense uncertainty, promise and frustration. As Tcherniakov laid naked his victims, the maestro flayed their feelings.
French diva StÈphanie d’Oustrac moved through Tcherniakov’s paces balancing a number of personalities, living not only the realities of Bizet’s vocal heroine and MerimÈe’s cold gypsy but also the delicacies, fears and sympathies of a real woman, and at the same time the detached professionalism of Tcherniakov’s illusive metaphor. The extent of these changing emotions were exponentially explored, her persona and her voice able to find always another elaboration, another level of feeling, another release of spirit.
American tenor Michael Fabbiano has the young tycoon swagger, the thirst for the ultimate experience, the blatant bravery, the unstoppable drive, the hidden vulnerability and the final weakness of all heroes. Mr. Fabbiano’s essentially monochromatic voice served this Jose to the fullest, his persona able to sustain the pressures and the abuse he imposed on himself until his final destruction. May you too beware of self discovery. 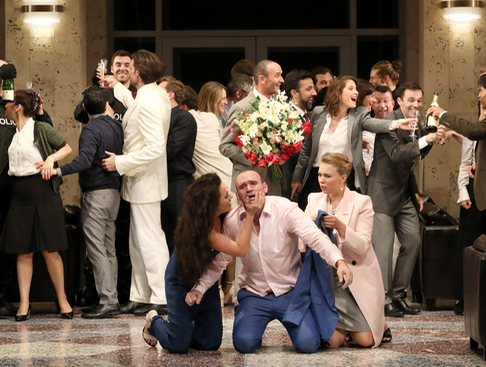 Jose’e graduation. Carmen, Jose, MichaÎla
In Tcherniakov’s spoken frame for the opera MicaÎla was Jose’s wife. Sung by French-Danish soprano Elsa Dreisig she used a bell-like purity of tone, in fact of metallic strength to push her husband into finding deeper feelings for her, i.e. so that he could give her more than wealth. This MicaÎla was maybe a lot like Tcherniakov’s Lady Macbeth, but here in search of a sort of selfish emotional power.
American baritone Michael Todd Simpson had the task of acting out a matinÈe idol in Tcherniakov’s implied metaphor. The smugglers were simply magnificent, the quintet a masterpiece of execution. The children’s chorus was in the pit, in impeccable unison with the stage (the male chorus mouthed their words in hilarious pantomime).
Essentially the same set as his Don Giovanni which he used for his two distinctively different stagings perhaps Tcherniakov will use this set as well to stage a second edition of this Aix Carmen. There will always be something more to say.
Michael Milenski