For the hundred year anniversary of Finland’s independence, the Savonlinna Opera Festival commissioned Aulis Sallinen for a work with castle Olavinlinna as its subject. The octogenarian, arguably Finland’s most famous composer since Sibelius, wrote Linna Vedess‰, or Castle in the Water, “A Chronicle in four parts for narrator, four singers, chamber orchestra, and Olavinlinna.” The 75 minute composition feels like a sung epic poem, at times even an oratorio (though without a choir) with the composer’s libretto based on Lassi Nummi’s poetry.
Kari Heiskanen’s mise-en-espace took full advantage of the castle setting. He centered the reduced Savonlinna Opera Festival Orchestra on stage. The Finnish thespian directed performers in an almost choreographed fashion. The four first-class Finnish soloists, soprano Tiina-Maija Koskela, mezzo Tuija Knihtil‰, tenor Jussi Myllys, and baritone Tommi Hakala sang with nationalistic pride and brought to life the castle’s history through their passionate narration. Purple and blue hues of the video projections of the castle on the limestone wall reminded of the Savonlinna sky after sunset.
Divided into four parts, each with three chapters, the work jumped through 500 years of stories and anecdotes. Sallinnen’s music accompanied these chronicles. In the first part, orchestral colours flourished from the wind instruments and thumping percussion. The singers describe an awakening of nature in the first chapter “Before”.
In “A speck of chalk, a grain of sand”, the soloists recounted the conquering of Olavinlinna by the Swedes and the Russians, while the “Dialogue between Erik Axelsson Tott and the Savonian woman” related how the Danish Christian Knight took over the region. In the second part, “The time to build” recounts the construction of the castle with its erected towers. Sallinen’s bellicose, military rhythms provided energetic jolts.
Sallinen added a fresh and lighthearted scene amongst all the serious history with “Salt and Malt (The Hop Waltz)– my favorite part of the work. In witty banter the four singers lined up, performed a silly dance as they mentioned the influence of beer. Together with the audience I laughed at this entertaining segment, which I could see easily adapted as an individual orchestral piece for future performances. 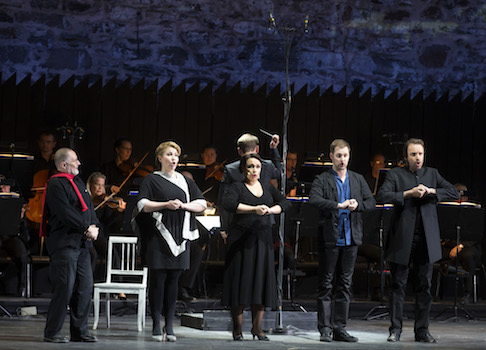 Singers dance to “Salt and malt (The Hop Waltz)”?
In “The dawn of a new age”, Sallinnen infused his score with the flair of Renaissance as the singers reminded the audience that during the castle’s construction, in Italy, Michelangelo, Machiavelli, Leonardo, and Colombus were cultivating humanity out of the Middle Ages. The third part lacked in energy, and felt more historical than musical. The chapters merely described who were in charge, and the momentum of the piece temporarily flatlined. Still informative though!
The finale proved very poetic. We move towards the present. “A message from Elimyssalo” described how the Olavinlinna now sits like an old man on a rock, and time has stopped around him. It was an elegant closing to this compelling journey.
Alternating with the narrator, heavy-handed voice-overs bellowed through the Castle. They did sometimes feel like a tour guide talking us through the history. Still, a tour with Sallinen’s music is far more thrilling than the monotony of a museum guide. The musicians made Olavinlinna’s 500 year history come to life. 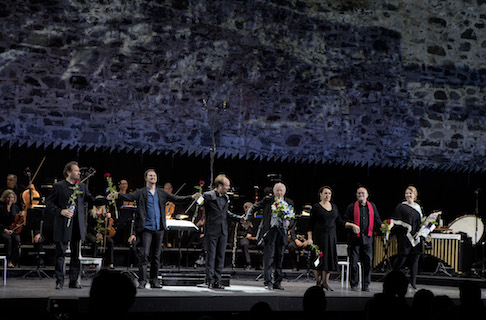 Aulis Sallinen between his performers of Linna vedess‰
With a firm hand in the new composition, Ville Matvejeff conducted the orchestra animated by his passionate Finnish pride. Yet however much engaging, I did not experience Sallinen’s music as a unifying whole, nor recognise themes. Although the four parts together seemed episodic, the chapters within each part flowed from one into another. The music seemed more like a soundtrack to a play. Outside, sporadically the many lokki (gulls) shrieked violently and contributed to Olavinlinna’s natural charm.
I was lucky on my first trip to Finland to hear Linna Vedess‰. With only two scheduled performances this Summer, it would be a shame if the Castle did not offer this work yearly, in some form or another, so visitors can get this sense of its history through Sallinen’s engaging storytelling.
David Pinedo