In the intimate Blank Performing Arts Center space, we are not so much observing a wrenching drama as we are participating in it. Set Designer R. Keith Brumley has outdone himself (or anyone else) with a massive prow of a hulking wooden warship that engulfs the entire playing space right up to the edge of the front row of the crescent of spectators.
Cannons poke through and point down the aisles. There are two black Jacob’s (rope) Ladders left and right allowing actors to clamber precariously above the action below, and the audience behind. A large wooden grate on the forestage has openings to allow the cast to “scurry below.” Masts feature ropes tied off in various ways so that the audience is looking through them as if part of the action. Upstage is filled with a two-tiered structure, the top of which serves as an upper deck flanked by stairs. Below, the structure contains Vere’s office, which moves forward and is revealed by the removal of four panels. To suggest the sailors’ cramped quarters below deck, two side pieces advance as though suggesting “arms” that enclose the action. A large hanging grate is positioned above the scene to replicate the one the sailors crawled through down center. 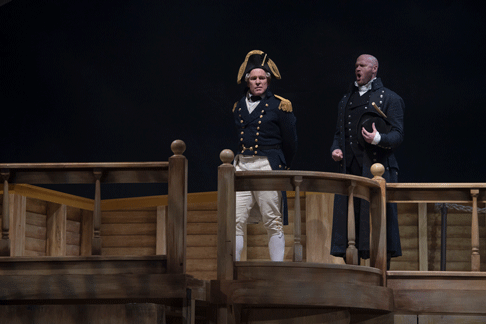 Captain Vere (Roger Honeywell) is confronted by Claggart (Zachary James)
The excellence of Barry Steele’s remarkable, moody lighting design was surpassed only by his exquisite projections. Jonathan Knipscher’s distinctive costumes greatly illuminated the characters, and aptly defined the caste system of the differing military strata. Brittany Crinson’s detailed make-up effects, including wounds and scruffily dirt-smudged sailors contributed much to the successful look.
I had never experienced an opera this large and active in such an intimate space, and director Kristine McIntyre did a masterful job filling every nook and cranny with meaningful action and carefully rehearsed “spontaneity” without putting us on sensory overload. Having successfully negotiated this huge group around that limited space, I think Ms. McIntyre is ready to be a traffic controller at O’Hare. But she also knew when to let her forces be still. When Lisa Hasson’s impeccable chorus and the soloists stood and poured out their climactic, overwhelming war cry in Act Two, it was electrifying in its raw emotion.
Kristine also knows how to wring every conceivable variation out of well-motivated blocking, usage of levels, and meaningful character relationships. Each of the principals clearly understood the dynamic and arc of their roles, and the monologues were coached and crafted like one act plays. This was a remarkable directorial realization, one that nurtured faultless ensemble playing as well as encouraging stand-alone personal bests. 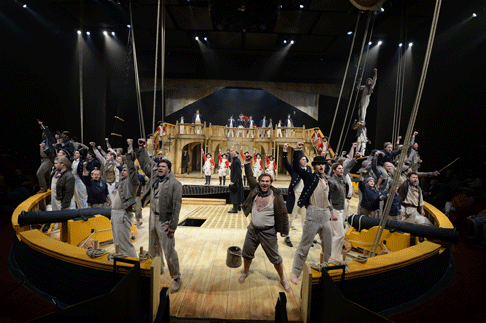 “Now Is the Moment”
Craig Verm was first a playful, then a powerful Billy Budd. Mr. Verm possesses a burnished, rolling baritone that has a particularly inviting timbre. He also has such a vibrant, handsome, guileless presence that “Oh, beauty, handsomeness, goodness” is an understatement. From his first, naÔvely eager statements, through his affecting bouts of stammering, to his exultant “king of the world” arioso perched on the rope ladder, to his gradual disbelieving betrayal and assumption of a tragic stature, Craig was every moment the star vocal and theatrical presence that galvanized the performance.
He had the audience in the palm of his hand the entire opera. When he is falsely accused, and cannot answer the charge owing to his stammer, patrons actually leaned forward in their seats, wishing they could help him. When he desperately pleaded with Captain Vere to “save him,” I wish I had had the Kleenex concession. His final prison monologue was heart wrenching, even if he tired just a bit by its end. Never mind, you just won’t see a finer Budd than that on view from Craig Verm.
Much the same could be said for bass-baritone Zachary James as the evil John Claggart. His imposing stature, his bad boy good looks, and most of all, his searing, orotund vocal production combined to make him a definitive Master at Arms. While he is consistently insistent in enforcing his discipline, Mr. James finds astonishing nuance in his delivery, as he is both physically and intellectually attracted to Billy, all the while disgusted by it. You will likely never hear Claggart’s aria more passionately performed with compelling tortured feelings, yet with rock solid vocalism. And Zachary’s death spiral after the fatal punch, ending fallen flat on his face, was beyond any physicality I have ever seen in this critical plot moment. 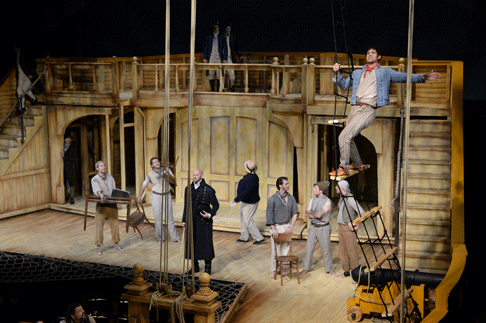 Billy Budd (Craig Verm on ladder): “Billy Budd, king of the world.”
Completing the principal triangle, Roger Honeywell gave the performance of his life as Captain Vere. I have enjoyed any number of memorable, conscientious performances by Mr. Honeywell over the years but none has engaged him this completely. The part was written for the sometimes precious crooning of Britten’s life partner, tenor Peter Pears. Well, Roger was having none of that! He waded in to this troubled, challenged character with grit and a feisty self-awareness, and he deployed his potent tenor with skill and precision.
These days, Roger pulls a few tricks to negotiate a few of the uppermost, soft passages, but he puts every utterance in service of the drama. His tortured, internalized debate of how to do the right thing was anguishing in its dichotomy of duty versus ethics, correctness or compassion. He began and ended the show as a clouded soul, doddering barefoot in his bathrobe, almost a spectral presence. His was a mesmerizing interpretation, uniquely his own.
The entire cast was so uniformly splendid that it may be odious to single out any smaller roles, but I must commend at least a few. Michael Adams utilized his commanding baritone to great effect as Donald. His interplay with Billy in the rough housing musical challenge in the sailors’ quarters was delightful, and impetuously kissing Billy at its end was a sassy touch. Thomas Hammons’ mature baritone proved a real asset as a touching Dansker. Christian Sanders’ clear, shining tenor served the role of the Novice well, and Emmet O’Hanlon was his wonderfully sung Friend. Ryan C. Connelly had just the right, bright sound in his well-schooled tenor to succeed as Squeak. Dennis Jesse (Mr. Redburn) and Federico de Michielis (Mr. Flint) were distinctive vocal personalities, as was the smoothly sung Lieutenant Ratcliffe from Kristopher Irmiter. 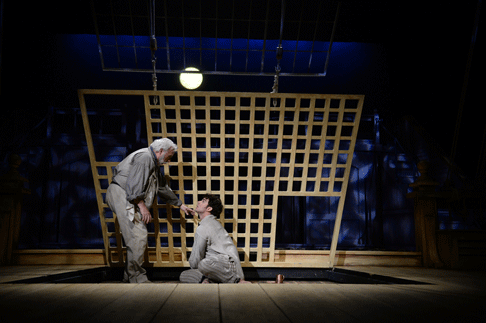 Dansker (Thomas Hammons) visits imprisoned Billy (Craig Verm)
Finally, in the pit, David Neely conducted a brilliant, insightful performance of Britten’s masterpiece. Make that “Monster Piece.” Billy Budd is scored for a virtuoso orchestra, and the DMMO musicians rallied to meet every challenge. Maestro Neely, his cast and band have delivered unto us as great a musico-dramatic achievement as is possible.
I have seen six other good productions of this piece over my years of opera going and I have always thought that, when all its planets align, it should make me weep but it never quite did. Well, Mission Accomplished. When Vere sang his final, diminishing statements, and the “sail” descended from above with its projection of rolling waves; and when the final projections first showed a silhouette of Billy’s hanging corpse, then morphed to Billy’s wrapped body floating to the depths, and then to Billy’s handsome face dissolving into the waves; well, this was a moment of surpassing beauty. And damn if the tears aren’t streaming again right now. . .
James Sohre