Similarly, Eleonore Kleiber’s costumes – all uninspiring browns and beiges
– suggest that the exotic richness of the East has been leeched of its
colour by imperial avarice and domination. Servants, officials and grandees
alike sport Western headgear – bowlers, trilbies – and this Pinkerton is no
dashing US officer, but a middle-aged boor in search of a dalliance before
he returns to the US to find himself a ‘proper’ US wife. It’s depressingly
bleak, visually and contextually.

There are moments when the screens serve up their magic, shifting
with the mercurial mystery of a magical Rubik Cube. At the end of Act 1, an
impatient Pinkerton slides through the maze and beckons to his new bride
through the twilight. And, at the end of the first part of Act 2, the
tortured silhouettes of Suzuki, Butterfly and her son, stark against the
translucency, form a painful image of futile hope as they long for
Pinkerton’s return.

But, the sparsity of Butterfly’s abode makes it difficult for us to imagine
the further material hardship that ensues following Pinkerton’s desertion.
Indeed, Act 2 reveals that two chairs, including a patriarchal looking
porch rocker, have been imported into her home, their emptiness an
irrevocable sign of absence and rejection.

The latter scenes, however, suggest that the external world is irrelevant
to this Butterfly; she is entrapped in a world which she has created inside
her own mind – a fantasy of family and a future. When her child runs in,
during her anguished conversation with the US Consul Sharpless, he’s an
unexpected reminder that there is a world beyond Butterfly’s mental
delusions and suffering.

Despite the Japonaiserie, there was a disappointing lack of
authentic grace about the movement direction of this performance. At times,
I felt that rather more care should have been taken to ensure authenticity
of detail and gesture. The heavy-footed shuffles and clumsy bows of the
servants in the opening scene were ungainly. Later, when Cio-Cio-San
arrived with her friends, despite the fine singing of the ladies of the WNO
Chorus I longed for them to be less brazen, to hide their faces behind
their fans – it was all a little G&S, as if they would break out into
‘Three Little Maids’ any moment … 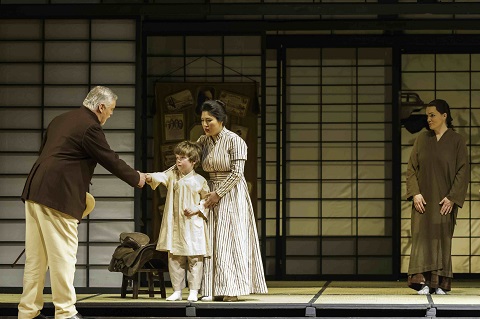 Similarly, Richard Wiegold’s Bonze was a figure of pantomime-esque
‘menace’, and Yakuside’s drunken exploits (exuberantly delivered by
George-Newton Fitzgerald) were a caricature of the ‘wedding guest from
hell’. Yamadori (Alastair Moore) was no imperious, regal suitor: carried in
by two lackeys who struggled to bear the weight of his sedan chair, his
entrance was less than stately and imposing, and vocally Moore conveyed
little overbearing arrogance. David Kempster’s Sharpless was similarly
lacking in definition and presence, his phrases requiring more strength and
character. When Butterfly related her tragic tale, this Sharpless – arms
tucked behind his back – seemed unmoved, and later emotional displays
seemed little more than clichÈd affectation. Butterfly’s son (Haydn Morgan
Lockwood) provided the requisite ‘cuteness’ but – even allowing for
theatrical licence and suspension of disbelief – it was hard to believe
that this near-shoulder-high lad was a mere three years old. 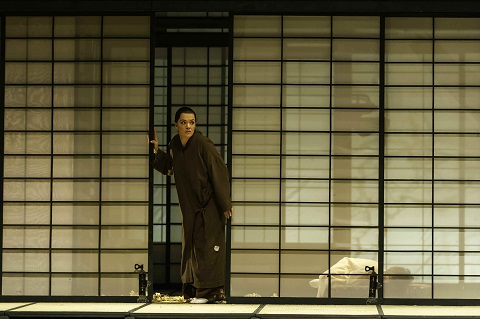 The performance was ‘saved’ by some sterling vocal commitment and
delineation by several of the principals. Simon Crosby Buttle’s Goro was
less overtly rapacious and ‘evil’ than is sometimes the case, but his
excellent diction and poker-straight demeanour conveyed a frightening
self-possession and power. Rebecca Afonwy-Jones was a superb Suzuki, her
rich voice strong in all registers, the phrasing well-judged. This Suzuki
was not in awe of her mistress; instead she lamented and raged at her
misconceptions. When Cio-Cio-San announced that she had been to the Mission
to convert to her new husband’s ‘faith’, Suzuki bowed her head to the floor
in abjection and appeasement to her own gods; and, she possessively
snatched up the spirits of Butterfly’s ancestors which Pinkerton so crudely
dismisses as ‘puppets’, recognising her mistress’s tragic error.

Paul Charles Clarke’s ignorant, cloddish Pinkerton was lacking in allure,
as the production seems to demand – as when he petulantly clapped his
hands, to get the faux marriage rituals over and done with. More
disappointingly, his vocal phrasing was sometimes inelegant as he forced
his tenor somewhat emphatically, struggling to carry across the WNO
Orchestra – who played accurately and articulately, but who were
over-encouraged at times by conductor Andrew Greenwood.

But, Judith Howard’s Cio-Cio-San grew in sympathetic stature as the
performance progressed. Though there were initially a few giggles when she
declared her years of age to be more than 10 and less than 20, once she’d
untied the cheap butterfly clips holding up her hair, Howard acquired more
grace, even though she was dressed for Act 2 in a shapeless dress that was
more Victorian governess’s dowdy gown than the plainest kimono. Howard had
the vocal stamina for the role, and real strength and grace at the top,
though her lower-pitched passages carried less well. ‘One Fine Day’ was
movingly shaped, and while Pinkerton lacked forthcoming warmth in their Act
1 ending duet, Howard’s lines gleamed with hopefulness.

The final moments failed to convince, although Cio-San-San’s heroic
self-sacrifice was beautifully lit (original lighting design by John
Waterhouse), her son shielded from her violent end by the opacity of a
screen. Why would Kate Pinkerton grab the child and run off, flinging his
treasured teddy bear to the ground? Why would Suzuki chase after her,
rather than rush to her dying mistress’s side?

Overall, the drama felt slow – and at just over three hours, this was a
long running time. At times, there was an unfortunate amateurishness to the
choreography and acting, but the strong singing of Howard and Afonwy-Jones
lifted the performance to emotionally moving peaks. In any case, the
punters seemed delighted.