And there’s more recent stuff, much more, mostly multi channel video and sound installations around the world that I won’t see
All of Mr. Kentridge’s disciplines come into play in his opera productions, providing this prolific artist a rich palate of expressive tools. Though basically it’s abstract black lines, and silhouettes, symbolic images, and fragmented squares (still or moving images or playing areas) on a stage face plane that is his hyperbolic canvas. It is one dimensional.
Given Mr. Kentridge’s prestige he works with only the most prestigious, i.e. rich opera companies, thus his productions are supplied with first rank artists, conductors and orchestras, and the most expert technical assistance. 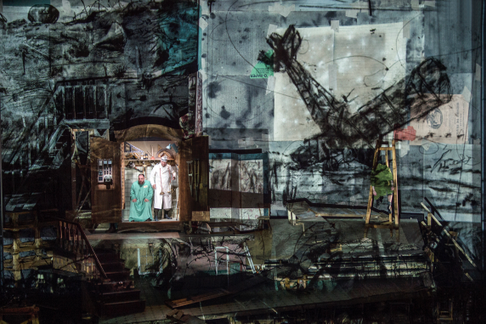 Matthias Goerne as Wozzeck, Jens Larsen as the Doktor
Of his operatic oeuvre, Wozzeck is his masterpiece, the precision of the opera’s focus, and the velocity of dÈnouement make quick and pointed use of his techniques. We had little time to tire of them, and given the subject matter they were not trite. It was an artistic success of image to music.
The program booklet informed us that Berg’s Wozzeck was born of the first world war, and composed in the shadows of its human devastation, thus the most powerful of the progression of projected images that captivated our interest (while Buchner’s tragedy unfolded below) was a huge WWI gas mask (not shown in photos).
This Wozzeck therefore did not dwell on the accumulation of the heady human tragedies of Wozzeck, Marie and the Child, but on the plethora of Kentridge images that flowed to the accompaniment of baritone Matthias Goerne’s smooth, art-song style delivery of Wozzeck’s deceptions and delirium. Mr. Goerne in fact was the surrogate William Kentridge in this production — Mr Kentridge himself is always a central feature in his stagings. 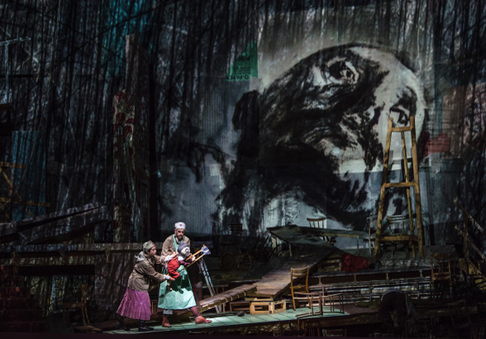 A super, the puppeteer and puppet of the child in gas mask
Of very great effect was the Child represented by a puppet, an image laden with metaphoric, if hackneyed possibilities. Though in addition to dehumanizing the human expressionism of Berg’s domestic tragedy the puppet troubled us greatly. Puppets don’t sing, so who was going to sing the “hop hops” of the final image?
No one did, they were played by mallets in the orchestra, the words projected on the supertitle screen.
The putrid physical and human atmospheres of Berg’s opera were smoothed over by the flow of images. This same flow obliterated the independence of scenes, the accumulation of which generally lead to the overwhelming effect of Marie’s murder, Wozzeck’s suicide and the Child’s isolation.
The Vienna Philharmonic in the pit of the medium sized Haus f¸r Mozart theater brought an overwhelming presence to Berg’s score. But the vaunted orchestral signposts were obliterated by the incessant flow of images. Moments when you ached to sink into Berg’s abstract musico-dramatic world rushed by so quickly you only reacted to them after the fact. Was this the intention of conductor Vladimir Jurowski, or was he a victim of the production?
Michael Milenski