There remain in my mind indelible images from the San Francisco performances. Ponnelle used a stage wide, brush-filled heath against a black void (an antique, under-stage hydraulic system was revived to vary heights of this floor). The storm raged with the bare pipes of the fly system in chaotic motion. And the rages of Mme. Dernesch’s Goneril remain a vivid memory as well. I know of no other productions of the Reimann Lear in the U.S.
In San Francisco it was sung in English, though this was before supertitles came into general use. Without a clear text in front of you the prodigious subtleties of the Reimann score were (dare-we-say) vaguely felt rather than dramatically understood.
Thus this Salzburg Festival revival of Reimann’s cold-war masterpiece, now with subtitles in both German and English, was a musical and dramatic revelation. It is a nearly precise reading of Shakespeare’s play, but in musical terms, and those chosen by composer Reimann are bleak and brutal and ugly. Like Zimmermann’s famed Die Soldaten (1965) Lear throbs with threat, fear and remorse. It is unrelenting, and there is no salvation.
Both operas respond mightily to Germany’s position as the epicenter of the cold-war, and to its enduring guilt for the two twentieth century world-wars.
Now we are in the twenty-first century, and most of us decline to bear the guilt of our fathers. Reimann’s Lear can now finally exist on purely artistic terms. It is a magnificent orchestral score that takes us on a journey into a human hell, an experience we can bear only with the protection of high art. It is not for the faint of heart, or art for that matter.
And for the Salzburg Lear there is no place more accommodating than Salzburg’s old riding school, the Felsenreitschule, its massive galleries carved into the solid cliff of granite that is the backdrop for this space now used as a theater. For Lear there is no more fitting orchestra than the magnificent forces of the Vienna Philharmonic, including a side gallery stuffed with massive additional percussion. 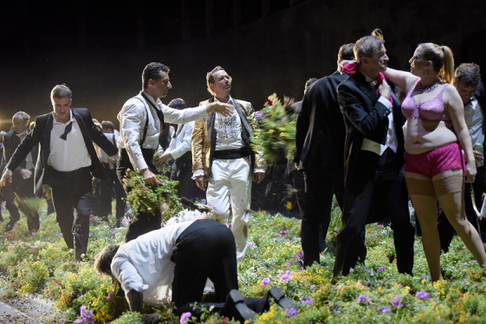 Michael Maertens as the Fool (speaking role) with Lear’s knights (chorus and supers)
No longer considered a parochially German experience, it was staged by Australian theater and film director Simon Stone. Like Ponnelle in Munich the action occurred on a single platform, first it was a heath of fresh flowers, then it became a pure white slab with a pool of blood. It was staged as theater in the round, several hundred people sitting below the empty galleries behind the platform.
There followed one coup de theatre after another — the flowered heath was ruthlessly torn out by Lear’s knights; rain poured down for the duration of the storm; Mickey Mouse appeared on the stage; spectators behind the platform were torn out of their seats and thrown into the pool of blood; the hundreds of spectators sitting behind the platform, suddenly symbolic victims of war, were brutally driven out of the theater; a full-stage surround of white film cloth dropped to create a massive, heroic hospital space for Lear and Cordelia’s death.
I don’t think I’ve given too much away (and spoiled it for anyone) as it was a site specific event, surely impossible to re-produce elsewhere. 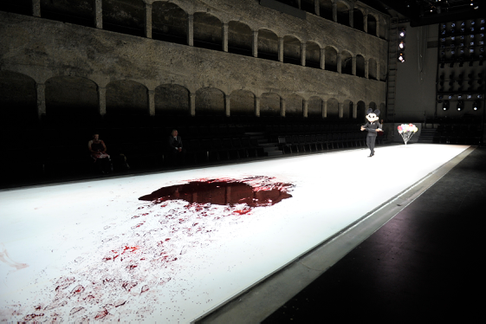 Lauri Vasar as the Duke of Glouchester in Mickey Mouse head cover
Cleveland Symphony conductor Franz Welser-Mıst urged and controlled rhythmic and harmonic contortions that flowed and over-flowed with ultimate Shakespeare’s cruelty. The stage resources equalled the pit resources in this production of massive size and daunting complexity.
Canadian born, British baritone Gerald Finley suffered willingly and mightily in a somewhat small scale, very sympathetic, human portrayal of Lear, Dresden Opera’s Evelyn Herlitzius again proved herself a singing actress of surpassing power as Goneril (she was Patrice ChÈreau’s Elektra at the Aix Festival). Estonian baritone showed himself as an accomplished dancer in his vivid portrayal of the blinded Glouchester, and German counter-tenor Kai Wessel made great effect as Glouchester’s son Edgar, the tragedy’s only survivor.
The Salzburg Festival was obviously committed to making this an important theatrical and musical event. The assembled cast achieved this goal dramatically and vocally, and the production team arrived at its theatrical brilliance with amazing technical finesse.
Michael Milenski

image=http://www.operatoday.com/Lear_Salzburg1.png
product=yes
product_title=Lear at the Salzburg Festival
product_by=A review by Michael Milenski
product_id=Above: Gerald Finley as Lear, Anna Prohaska as the ghost of Cordelia at the death of Lear [All photos copyright by the Salzburger Festspiele / Thomas Aurin]