Handel opera productions are famously fraught with troubling decisions — which voices to use, which gender to use for which voices, which dances to use from which opera. Sometimes decisions are made for you. Like, for example, Handel had no choice but to use the Covent Garden theater back in 1735 for his Ariodante, and to use an imposed roster of singers, and to use French choreographer Marie SallÈ’s troupe of dancers.
The abstract story telling of the Handel operas indeed offer stage directors rich possibility for imagining context. For example the metteur en scËne, Richard Jones, of the 2014 Aix Festival production of Ariodante illuminated its dramaturgical depths by placing the action within the fundamental Christian values (and confines) of the American Midwest.
But in Salzburg German stage director, Christof Loy, took everything at absolute face value — it was Handel’s opera as it was, through post-modern lens. As givens he had a producer (general director) of impeccable taste (Cecilia Bartoli) for the casting, one of the world’s foremost artists as his Ariodante (Cecilia Bartoli), and an unlimited budget for Salzburg’s splendidly equipped Haus f¸r Mozart theater. 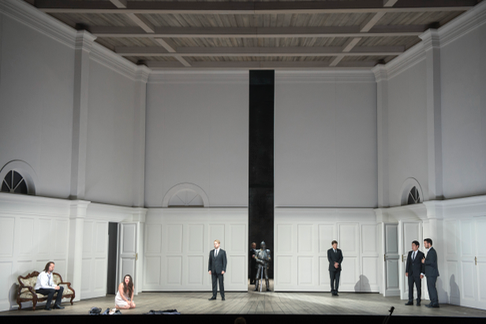 Nathan Berg (The King of Scotland), Kristofer Lundin (Odoardo), Christophe Dumaux (Polinesso), Sandrine Piau (Dalinda)
Like the 1735 production at Covent Garden, Mr. Loy’s production was not modest. It had multiple scene changes. A basic neoclassical room opened up from time to time to reveal elaborately painted Rococo scenes, and once it opened to reveal a shockingly huge room (it was elaborately forced-perspective architecture). As well there was an elaborately blank wall that descended mid-stage from time to time to obliterate all sense of physical location.
Though back in Aix Handel’s interpolated dance music became the erotic pole dancing of the U.S. prohibition era, the dances just now in Salzburg were simply highly stylized movements in mimic of the interlude ballets of French Baroque theater, the dancers dressed in French court dress of the time (including elaborate wigs).
Handel’s Ariodante was a castrato, Instead Mr. Loy’s Ariodante in Salzburg was a mezzo-soprano. He was Mme. Bartoli, and that provoked more than the usual play of gender confusion given this diva’s fame and repertory. It was a confusion easily solved by Christof Loy and Cecilia Bartoli as Ariodante reappeared after his failed suicide as partly female (see photo above), a transition that continued into the final scene where la Bartoli lost her beard as well (but she did, amusingly, maintain her exquisite trouser role imitation-male movement).
In turn, of course, Ariodante’s damsel Ginevra had donned boots and a jacket for the final scene with Ariodante to assume some genial male characteristics. The conceit quite evidently was that there was finally a union of male and female, at once completing human complexities of the two individual human psyches, and dramatically wrapping up the story in marital union. [In Aix Ginevra was last seen hitching a ride, alone, to Toronto.] 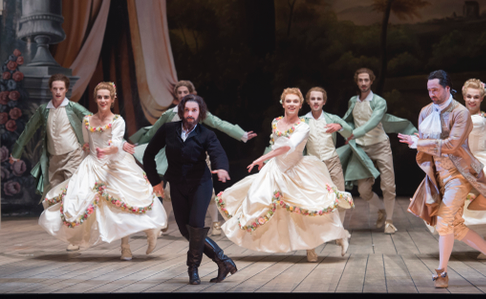 Cecilia Bartoli (Ariodante), Christophe Dumaux (Polinesso), dancers
But finally it remained certain that the magnificent Bartoli had always been la Bartoli and never Ariodante.
Lost in the marvels of the Baroque’s psychological affects, elaborate Baroque vocal ornamentation, and the glories of the Baroque orchestral palate it did not matter where we were. And certainly it could not matter to the seven singers of the opera where they might find themselves either. Thus sometimes the actors were in simple contemporary dress, sometimes in current formal attire, sometimes in Baroque period costumes. What’s more, the Polinesso Lurcanio duel was fought in head-to-foot knightly armor. This play of costumes obliterated all sense of story and took us directly into the singers’ psyches.
Most of all stage director Loy indulged the famed indulgent smile of the Renaissance poet Lodovico Ariosto, the author of the stanzas of his epic Orlando Furioso from which the tale is taken. Like Ariosto we too, together with the evening’s singers indulged these chivalric characters in their wishes and disappointments, their plotting and undoing, their anger and joy, their deceits and generosity, their weaknesses and strengths. Etcetera.
There was no place, and time stood still. This was our shared joy with the artists in this remarkable production.
Early music conductor Gianluca Capuano wrenched every possible nuance of tone from the truly splendid voices of Les Musicians du Prince, a new orchestra in the service of Albert II of Monaco founded by Cecilia Bartoli.
La Bartoli amazed us with magnificent ornamentation in Ariodante’s drunkenness and then spellbound us in his extended lament, only to amaze us even more more in her final aria of joy. American soprano Kathryn Lewec met her halfway, enthralling us in her extended laments and thrilling us in her joy. The villains of this operatic extravaganza were both French [!], Sandrine Piau made Dalinda vividly if blindly in love with Polinesso, charmingly and wittily sung — breathtaking coloratura — by countertenor Christophe Dumaux. Rolando VillazÛn brought huge presence to Ariodante’s brother Lurcanio, nailing his second act aria “Il tuo sangue, ed it tuo zelo” but later fought vocal distress. Canadian bass Nathan Berg suffered mightily and exulted greatly as the King of Scotland. His able leutenant was sung by Swedish tenor Kristofer Lundin.
Norwegian National Ballet choreographer Andreas Heise threw some very witty twenty-first century steps and poses into his sort of convincing facsimile of French Baroque dance. Set design by Johannes Leiacker, costume design by Ursula Renzenbring, and lighting by Roland Edrich provided the utmost in measured teutonic theatrical chic to this magnificent production.
Michael Milenski

August 22, 2017. Cast and production information above