The conspiracy theorists are ever vigilant for signs of impending
apocalypse. Only a few days ago, a NASA tweet about a solar eclipse due to
occur later this month triggered declarations from evangelical Christians
that humanity will be wiped out by the event. Given that terrorist
atrocities and nuclear stand-offs currently seem to be every-day fare, one
might be forgiven for occasionally feeling as if the end of the world is
indeed nigh.

These are dark days and such times are ripe for exploitation by both
doomsday-sayers and artists. Jack Stanley’s new play,


asks us to reflect upon how we would behave if the social order collapsed,
alienation and conflict ensued, and we had to fight to survive. But German
avant-gardist Kurt Schwitters (1887-1948) was posing the same
question 90 years ago, in his ‘grotesque opera in 10 pictures’, Collision (Der Zusammenstoss).

Paradoxically, montage seems to have been the underlying principle uniting
Schwitters’ fragmentary art. He engaged with every artistic current of his
day: German Expressionism, Cubism, Dadaism, Surrealism, Constructivism and
Bauhaus. His art work included dramatic large-scale assemblages,
installations, sculptures, paintings, drawings and advertising designs, but
today he is best known for his collages – of tram tickets, newspaper
shreds, scraps of cloth, and other ‘remnants’ of everyday life.

Schwitters and his collaborator, the German-American artist and art
historian Kate Trauman Steinitz, seem to have applied the same montage
approach to the opera libretto upon which they embarked in April 1927.

Based on one of Schwitters’ own short stories, Collision was to be
a sort of ‘multi-media’ opera – a blend of play, cabaret and opera which
mixed words, music and rhythm in new ways. The ‘plot’ juxtaposed different
social types, switching rapidly between place – an observatory, an airport,
a broadcasting station – and character, and charted the responses of his
bizarre medley of dramatis personae to the news that the end of
the world was looming.

When astronomer Virmula espies a new ‘Green Globe’, the euphoria of his
planetary discovery is tempered by the realisation that it is heading
straight for the Potsdamerplatz in Berlin. The media spread word
of the imminent apocalypse, but rather than fear and frenzy the news
incites opportunism and exploitation. Virmula sees not catastrophe but fame
and fortune on the horizon, while his lover, Alma, exults in the projected
honour he will earn. The High Commissioner of Order, aptly named Masterly,
dons his uniform and attempts to assert his authority – over the city and
the comet – by organising the preparations for the final sunset. Big
Business sees the chance to make a quick buck, as journalists and radio
presenters use hyperbole to stoke hysteria and sell another newspaper or
song. Led by the janitor, Rommel, the homeless rehearse for Revolution,
while the rich, such as the concert singer Paulsen, are indifferent to the
threat to their lives of luxury and leisure.

This ‘Science-Fiction Opera Libretto in Banalities’ won second prize (300 reichsmarks) in a competition in Vienna in August 1928, but the
score remained uncompleted. The project fell victim to the fiscal crisis
triggered by the Wall Street Crash and ultimately the Director of the
Berliners Staatsoper, who had considered staging the work, declared it ‘too
ultramodern and much too comic’. Ironically, the opera-that-never-was
embodies both the context which informed it and the very question that it
asks: after the collapse of the Dream and amid the ruins of the glorious
roaring Twenties, how will the world survive?

In collaboration with director Cecilia Stinton and the other members of
Spectra Ensemble, composer Lewis Coenen-Rowe has rescued Schwitters’
music-drama from oblivion by composing a new score which he
describes as ‘heavily influenced by the music of Kurt Schwitters’ 1920s
Germany, combining elements of contemporary art music, popular song, jazz
and cabaret’. That’s a bit misleading, as Collision is not really
a ‘cabaret opera’, and there’s not really any ‘popular song’; but,
Coenen-Rowe has crafted strong vocal lines and evocative
instrumental moods which capture the darkness and bitterness of so much of
the music of the Weimar era, with its experimental intermingling of the
‘popular’ and the ‘classical’. And, the through-sung structure does have
some aria and ensemble ‘moments’, including an intense paean to
‘Organisation’, mankind’s last hope in the face of the imminent cosmic
crash. 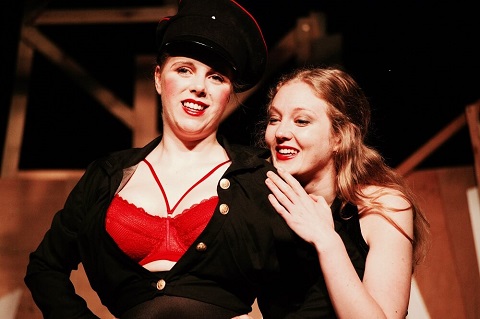 The score’s distortions – tremors, thunderings, twisting swoops and
screeches – are an effective aural embodiment of a chaos in which panic is
juxtaposed with partying. And, the music is adeptly played by the band of
five musicians – pianist Erchao Gu, violinist Carlos Yeung, cellist Harvey
Gibbons, saxophonist Claudia Baum and clarinettist Robert Winup – who are
conducted efficiently by musical director Sean Morris.

In the small Studio 2 at the Arcola Theatre, however, the music overwhelms
the singers, further exacerbating the uneven diction and the lack of
directorial clarity. Schwitters’ story is both wry and sly, humorous and
bitter; but, it’s also fragmented and Stinton – admittedly hampered by the
limitations of space – hasn’t found a way to show how the parts of the
collage ‘cohere’. Schwitters’ discontinuities convey the social upheaval of
the time, but here the ‘gaps’ don’t reflect such confusion, they aggravate
it. Even though the action was ‘up close’, much of the text was inaudible
and apart from the fact that Barnaby Beer’s Virmula had spotted an
earth-bound solar body, it was impossible to discern what was happening
other than that, whatever events were unfolding, they were taking place at
fever pitch.

This was a pity, as the young cast are talented and committed, and one
senses that the more detailed set, staging and choreography that would be
possible in a larger venue would enable the singers to develop their
characterisations beyond the grotesque.

Beer’s focused baritone communicates Virmula’s zeal while as his
girlfriend, Alma, Olivia Sjˆberg uses her soft-edged mezzo to convey her
affection and adulation. Made to prance about in black hot-pants,
suspenders and cut-away velvet waist-coast, Bethany Horak-Hallett has
strong presence as Taa, Mastery’s girlfriend, infusing her mezzo with both
sultriness and shine. Alexander Gebhard’s attractive lyric tenor emphasised
Paulsen’s smug complacency. Juliet Wallace had all the high notes for
Masterly’s stratosphere-surfing but unfortunately the volume was as
unremittingly high as the register, and the charm of the unrelenting
petulant posing and saucy posturing quickly wore off.

Schwitters’ artistic credo was the equality of all the elements in the
collage – word, music, movement, sets, costume, lighting. But, with the
acting space accommodating barely a couple of chairs and a broom, the music
inevitably dominated, at the expense of dramatic coherence and interest,
and theatrical breadth and depth. Moreover, the through-composed score
actually negates Schwitters’ aim for parity of all the ‘available
materials’ which are combined ‘for artistic purposes’. Perhaps balancing
instrumental and sung episodes with spoken dialogue would have created a
more dramatically engaging and communicative idiom?

At the close, when the collision – by this point, both feared and craved –
fails to materialise, the bated breaths give way to the bathos of survival.
‘What if it’s not the end, what if it’s pretend?’ they have sung. Well, if
it’s not the end of the world after all, then life will go on as usual, the
contradictions of human nature unchanged.

Collision: a cabaret opera
– by Kurt Schwitters and Lewis Coenen-Rowe