But, the ‘Spain’ of Debussy’s Iberia or Ravel’s Rapsodie espagnole and L’Heure espagnole was essentially
an ‘exoticised’ musical land. Ravel’s mother may have been of Basque origin
but Debussy’s experience of the country amounted to a brief day-trip to San
Sebastian, although this didn’t stop Spanish composer Manuel de Falla
remarking of Debussy’s piano work La SoirÈe dans Grenade, ‘There
is not even one measure of this music borrowed from thee Spanish folklore,
and yet the entire composition in its most minute details, conveys
admirably Spain’.

De Falla moved to Paris in 1907 where he was welcomed and supported by
Ravel, Debussy (with whom he had previously corresponded) and Dukas, and
the music that he composed during his Parisian sojourn – such as thePiËces Espagnoles for piano solo and the concerto, Noches en los jardines de EspaÒa – reveals the influence of the
Impressionist composers with whom he associated. But the outbreak of war in
1914 forced Falla to return to Spain where he attempted to establish
himself as a composer in his native land, his music blending the modernist
influences that he had absorbed during his travels in northern Europe with
authentic Spanish idioms.

In his one-act ballet with chorus, El amor brujo (usually
translated as ‘Love, the Magician’, though brujo literally means
‘male witch’, suggesting more demonic forces) Falla strived to combine art
music with genuine gypsy song and dance, but though the composer conceived
the work as a gitanerÌa and it was written for Pastora
Rojas Monje – the daughter of the famous flamenco dancer Rosario la
Mejorana – when the work was premiered in 1915, contemporary critics
complained that the music was too ‘French’.

The ballet scenario by Gregorio MartÌnez Sierra was based upon an
Andalusian folktale in which a beautiful gypsy girl, Candelas, is haunted
by her dead lover – a wicked, jealous reprobate whom she nevertheless both
still loves with a morbid intensity and fears may return, a fierce spectre
demanding her devotion. When she is courted by the gallant Carmelo,
Candelas is unable to cast off her obsession with the past. Carmelo coaxes
pretty Lucia to help him set a trap for the ghost and Carmelo and Candelas
are able to exchange the ‘perfect kiss’: their love defeats the evils of
the past.

Falla subsequently revised the ballet in the form of an orchestral suite in
which four of the twelve movements present songs in which Candelas sings of
her heartbreak, of her dead lover’s hypnotic unearthly power and, finally,
of her release from the spell by Carmelo’s kiss. And, it was this
orchestral suite which opened this Franco-Hispanic Prom presented by
Charles Dutoit and the Royal Philharmonic Orchestra.

For all its pictorial realism and folk authenticity, El amor brujo is also notable for its beautifully detailed
orchestration and this was a performance that was more refined than
sensuous, as Dutoit focused on instrumental detail and variety of colour at
the expense of the score’s earthy vitality and rhythmic fickleness. The
Hispanic inflections were somewhat watered down – the woodwind’s flamenco
flourishes in the opening bars might have had more kick and Èclat for
example – and the tempi sometimes felt sluggish, the ostinato rhythms too
inflexible and mechanical. The ‘spells’ of ‘Midnight’ (‘A medianoche’) were
more stately than sorcerous, heralding a ‘refined’ ‘Ritual Fire Dance’
which sizzled rather than scorched: such elegance and polish would not have
frightened the horses, let alone driven out the evil spirits.

But, if Dutoit wasn’t the most transfixing story-teller he proved a vivid
scene painter in the score’s descriptive passages. The opening cave scene
was appropriately dark and murky, tinged with the menacing crescendos of
the tremolando strings and the oboe’s eerie cries against the twinkling of
the harp. In ‘El aparecido’ (The ghost), the harp glissandi wailed like a
banshee, initiating a lurching ‘Dance of terror’ in which the snatching
woodwind and sharply plucking strings taunted each other like whirling
spirits. There was some lovely tender string playing in ‘El cÌrculo m·gico’
(The magic circle) and the tunefulness of ‘Pantomima’ (Pantomime) was
beguiling, though the folk inflections of the latter were muted.


but her voice is quite light-weight and in this much larger auditorium she
struggled to project the love-crazed gypsy’s songs of obsession and
bewitchment. She was also rather too score-bound; a little more eye-contact
would have helped but, at least from where I was sitting in the Hall, the
text seemed to disappear into the score which she held in front of her. In
the ‘CanciÛn del amor dolido’ (Song of the broken heart), D’Oustrac
attempted some gitanesque mannerisms – ‘deforming’ some of the
syllables, fiercely rolling the ‘r’s, reaching for occasional guttural
hardness – but her chest voice isn’t sufficiently dark and sultry to make
such gestures feel entirely true. The opening ‘ay!’ needed more raw
emotion, the melismas more vibrancy and the phrases more colour modulation,
to convey the mourning girl’s rapid fluctuations from sadness to anger,
through anxiety to bitterness, and finally from delirium to madness. 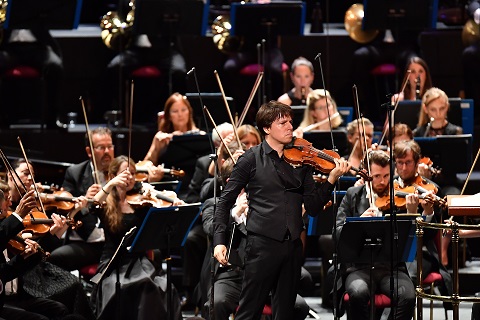 If passion and intensity were missing from El amor brujo then
Joshua Bell more than compensated in a performance of Lalo’s Symphonie espagnole – a concerto too seldom performed – which was
punchy, grandiose, impish and silkily lyrical, by turn. As he chased Lalo’s
melodies up the violin’s G-string, Bell’s sound was never gritty, always
soft-edged though well-defined, and beautifully nuanced with judicious
portamento, vibrato and rubato. Similarly, the stratospheric passages shone
crystalline and pure. The second movement’s seguidilla sparkled and together with the habanera bestowed the scents and sultriness of Iberia that were absent from the preceding Falla suite. The fiendish Rondo flew by with stunning nimbleness but it was the exquisite melodism of
the close of the Intermezzo which really took one’s breath away.
Massenet’s ‘MÈditation’ from ThaÔs kept happy those punters eager
for further opportunity to relish Bell’s beautiful tone, but I couldn’t
help thinking that the high spirits of a dance miniature by Falla or
Sarasate – to whom Lalo’s concerto was dedicated – might have stirred the
passions more.

Organist Cameron Carpenter joined Dutoit and the RPO for a fittingly
thunderous rendition of Saint-SaÎn’s Third Symphony (the ‘Organ’ Symphony).
As in the Lalo, Dutoit drew disciplined, expressive playing from his
instrumentalists – the richness of the brass was particularly eloquent –
and the structure was underpinned by persuasive rhythmic and temporal
fluency. Saint-SaÎns’ symphony was commissioned by the Philharmonic Society
and first performed in 1886. It was thus a fitting conclusion to a concert
during which Dutoit – the RPO’s Artistic Director and Principal Conductor,
who made his debut at the Proms 36 years ago in 1981 – was presented with a
Royal Philharmonic Society Gold Medal by John Gilhooly, the Chairman of the
RPS, thus becoming the 103rd recipient of the illustrious award.