For the climax of the BBC Proms celebration of the 500th anniversary of the
Reformation, Butt and the Dunedin Consort performed Bach’s St John Passion at the Royal Albert Hall in the context of Lutheran Vespers, with organist
Stephen Farr performing chorale preludes by Bach and Buxtehude on the Royal
Albert Hall Organ, and the audience being encouraged to join in the
congregational chorales. The passion was performed by Nicholas Mulroy
(Evangelist), Matthew Brook (Jesus), with Sophie Bevan, Tim Mead, Andrew
Tortise, Konstantin Wolff and Robert Davies.

But if we were expecting the same stripped down approach to the passion
that John Butt uses on the recording, then we were in for a bit
disappointment. Part of Butt’s ethos when recording Bach is not only
textual fidelity, but research into the original performance traditions.
This meant that the CD re-created the Lutheran liturgy for Good Friday
Vespers, and used a total of ten singers to perform all the solos and the
choruses, with a similarly small instrumental ensemble. At the Royal Albert
Hall, Butt had a professional choir of 36 and an orchestra with based
around 33 strings.

Thankfully, the performance from Nicholas Mulroy as the Evangelist showed
that you did not need large forces to fill the Royal Albert Hall. Mulroy
was riveting, easily communicating music and text, and singing largely from
memory, this was spine-tingling narration. Mulroy is a highly involved and
vivid performer, bringing out the extremes of the passion story, and
imbuing the music with a remarkable range of colour. But, as with every
good Evangelist, it was the text which really counted and Mulroy’s level of
involvement and projection made a gripping evening.

Mulroy was matched by the dignified Jesus of Matthew Brook, who similarly
used the words to devastating effect and somehow conveyed that he really
did mean it. He sang with a trenchant firmness of line, and rather than
being other-worldly was wonderfully human. 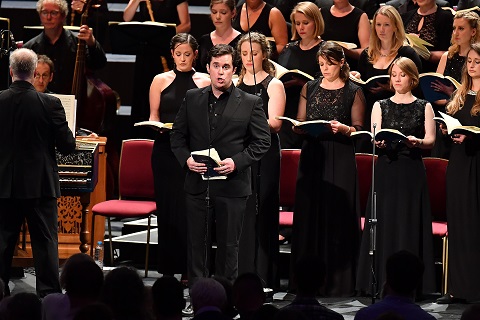 The other soloists did not always achieve the same degree of
communicability, though it has to be admitted that singing Baroque music in
the wide open spaces of the Royal Albert Hall is rather a fine art. Sophie
Bevan was a beautifully focussed soprano soloist. ‘Ich folge dir
gleichfalls’ was sung with a lovely sense of joy, and some fine
passagework, whilst Bevan was partnered by the magical sound of four
baroque flutes. In ‘Zerfliesse, mein Herze’ she found a real vein of
expressive purity.

Tim Mead was poised and expressive in ‘Von den Stricken meiner S¸nden’,
though perhaps a little too controlled, and he was partnered by some very
fine oboe playing indeed. In ‘Es is vollbracht’ he was movingly expressive,
and in contrast to many of the fleet speeds in other movements here John
Butt allowed the movement to unfold in its own time, with vivid contrasts
in the middle section.

Andrew Tortise made ‘Ach, mein Sinn’ quite dramatic and rather vivid.
‘Erw‰ge, wie sein blutgef‰rbeter R¸cken’ was beautifully considered and
expressive, but seemed to lack the ultimate emotional punch needed. Here
Tortise was partnered by the lovely sound of a pair of muted violins,
whilst in ‘Mein Herz, indem die ganze Welt’, Tortise’s fine performance was
somewhat overshadowed by the vivid playing of the orchestral violins

Bass soloist Konstantin Wolff was nicely correct in his arias, singing with
fine control and nice sense of line but he seemed not to be able to project
the underlying emotions across the Albert Hall’s large spaces, this was a
rather more intimate performance. In ‘Mein teurer Heiland’ the balance with
the chorus was not always ideal. Baritone Robert Davies sang Pilate with
fine musicality but with a rather muted sense of the drama.

The chorus might, perhaps, have been larger than I was hoping for but
musically they certainly did not disappoint. Butt’s speeds throughout were
often fleet, and his singers followed him admirably and produced a series
of vivid and moving performances. The great opening and closing choruses
were both kept moving, yet without skating over the surface so that the
deep emotions of the music was conveyed too. In the turbae, the singing was
fast, furious and wonderfully vivid.

The large orchestra was similarly impressive, not just in the myriad solo
moments that Bach provides, but in the degree of expressivity found in the
general run of the music.

The soloists sang in the opening and closing choruses and chorales, which
is just as it should be and made the piece feel much more like a communal
expression. The extracts of the vespers service provided a remarkable piece
of context. The reconstruction is, to a certain extent, speculative but
informative nonetheless. The way the Bach and Buxtehude organ chorale
preludes flowed seamless from the chorales on which they were based, sung
lustily in unaccompanied unison by the Prom audience, gave a vivid
impression of the importance of context in this work. After the end of the
passion, we flowed directly in Jacob Handl’s funeral motet, and then on to
the blessing, and a final pairing of chorale prelude and chorale.

In the programme booklet, John Butt talked about the important hierarchy of
the different levels of singing in the church in Bach’s day, from the
congregation’s chorales through the more sophisticated Renaissance-style
motet singing (done with several singers to a part) to the more soloistic
performance of Bach’s own music, performed by very few singers. But this
was something we rather missed in this performance which allied itself to
modern choral traditions of performance. In terms of balance there was the
usual problem of ‘can you hear the oboes?’. In the livelier choral moments,
we heard very much a choir and strings with both the oboes and the chamber
organ rather disappearing into the texture.

It is unfair of a listener to expect a performance to re-create exactly the
effect of a particular recording, but I could not help feeling that this
performance of the St John Passion was a missed opportunity in a
number of ways. The long running time (nearly three hours) and late start
time meant that audience members were leaving before the end, and you
wished that an afternoon slot could have been found for the event. That
someone did not believe that a stripped down performance with just 10
singers could fill the Royal Albert Hall was a shame, Nicholas Mulroy
showed how it could be done.

The performance is available on BBC iPlayer for 30 days.