Robin Ticciati conducted the Glyndebourne Chorus and Orchestra of the Age
of Enlightenment, with Richard Croft as Tito, Alice Coote as Vitellia, Anna
StÈphany as Sesto, Joelle Harvey as Servilia, MichËle Losier as Annio and
Clive Bayley as Publio. Iain Rutherford’s semi-staging was based on the
production by Claus Guth, with designs by Christian Schmidt.

With the orchestra pushed well back on the platform, the opera was
performed in two areas, the fore-stage and a raised area behind the
orchestra. Rutherford’s blocking made very effective use o the Royal Albert
Hall. The remains of Schmidt’s sets, modern arm-chairs, clumps of corn and
rather plastic-looking rocks, puzzled somewhat. The costumes were stylish
modern dress, though somewhat drab in colour except for that of the actor
playing Berenice, Tito’s lost love.

This was very much a modern-day production with contemporary mores, there
was little of the classical nobility often associated with the work.
Richard Croft’s Tito was wracked throughout with extreme emotion and his
clemency was hard won, with some violence done to the musical line of the
recitative (granted, this is not by Mozart but he must have approved of
it). Similarly Vitellia and Sesto’s relationship was very physical, we
first encountered Alice Coote and Anna StÈphany in a very compromising
clinch.

Anna StÈphany made a very lithe, youthful Sesto, convincing in masculinity
and very much suggesting Sesto’s youth, and the gap in ages between him and
Alice Coote’s maturer Vitellia. StÈphany’s performance was similarly lithe,
her slim mezzo-soprano voice offering us a combination of shapely line and
vibrant passion. ‘Parto; ma tu ben mio’ was taken quite slowly in the
opening section with great freedom in the phrasing, but StÈphany and the
clarinettist really conveyed the music’s intensity whilst Sesto’s final
aria, the rondo ‘Deh, per questo istante solo’ was beautifully shaped,
rising to strong emotion at the end. 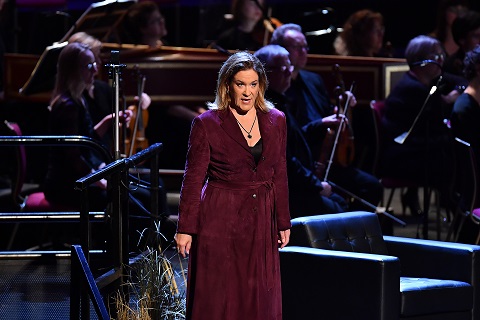 Alice Coote performs the role of Vitellia in Mozart’s La clemenza di Tito with the Orchestra of the Age of Enlightenment under conductor Robin Ticciati. Photo credit: Chris Christodoulou.

Vitellia is a role that Alice Coote seems to have been born to play, a
complex character whom we don’t quite love but can understand. Coote really
brought out Vitellia’s conflict of emotions, and in each utterance we could
see and hear the play of emotions across her face and her voice. Some of
the role lies quite high for a mezzo-soprano, but Coote never made us feel
she was going outside the role the extremes of range (high and low) were
representative of the extremes of emotion. But there was also much quiet,
beautiful singing; this Vitellia was more than just a scheming bitch. Coote
crowned the performance with a stunning final accompanied recitative, where
each word was strongly coloured, leading to a tormented account of ‘Non,
piu di fiori’. This had Coote’s trademark flexibility of phrasing and use
of rubato, but always in the service of heightening the emotion. And she
was superbly partnered by the solo basset-horn. Interestingly I had
previously seen Coote as Sesto, and wondered how many mezzo-sopranos have
played both roles.

The only soprano in the cast, Joelle Harvey was a demure but strong-minded
Servilia. Harvey showed that pure tone and beautiful phrasing could be
combined with real strength of character. Servilia is one of the few
admirable characters in the opera, and Harvey made it show. She was finely
partnered by MichËle Losier’s Annio. Like Anna Stephany, Losier created
Annio as a believable, rather intense and serious young man. And made him
count as a character, rather than just a dry run for Sesto. MichËle Losier
and Joelle Harvey made Annio and Servilia’s Act One duet profoundly
touching.

Tito’s arias are some of the most conventional in the opera. Richard Croft
was not unstylish, but his singing was very vibrant with a great sense of
drama rather than classical poise. It was very much in those recitatives
that he really made the character felt. Clive Bayley was a highly
characterful and easily dislikeable Publio, definitely a career politician
on the make. And Bayley sang Publio’s aria with vivid vigour. 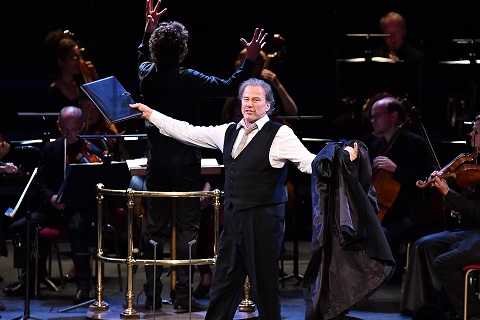 Richard Croft performs the role of Titus in Mozart’s La clemenza di Tito with the Orchestra of the Age of Enlightenment under conductor Robin Ticciati Photo credit: Chris Christodoulou.

One of the striking features of librettist Caterino Mazzola’s adaptation of
Metastasio’s libretto (done to Mozart’s instruction), is the introduction
of many duets, trios and ensembles. And Mozart’s use of them make the drama
really progress. It was noticeable in this performance ow the cast used the
ensembles dramatically. So that both trios told a real story, and the
astonishing ensemble which concludes Act One was positively gripping.

The Glyndebourne Festival Chorus was on strong form, singing Mozart’s
choruses with power and style. But, in the context of a stripped back
staging their use of Peter Sellers-like hand choreography was somewhat
puzzling.

Robin Ticciati conducted a lithe and lively account of the score, but he
was not averse to slowing down and allowing highly expressive phrasing from
the singers. The Orchestra of the Age of Enlightenment was on strong form,
producing a nice mix of drama and sophistication.

Mozart’s penultimate opera can still sometimes seem something of a
misunderstood ugly duckling, its reversion to opera seria an aberration
after the trio of operas with Lorenzo da Ponte. The opera’s message of
clemency is very much an Enlightenment concept which does not always sit
well with modern directors. But Glyndebourne fielded a well balance cast,
and all contributed to a performance which, musically at least, took the
opera seriously and conveyed intense emotions with great style.

Glyndebourne Opera at the BBC Proms

Conductor: Robin Ticciati, Orchestra of the Age of Enlightenment