Already before Torvaldo e Dorliska Rossini had three of his major comedies under his belt (La pietra del paragone, L’italiana in Algeri and Il turco in Italia) and two successful tragedies (Tancredi and Elisabetta).
But Torvaldo e Dorliska is a dramma semiseria — a horse of a quite different color. The genre can stretch finally into operas like maybe Don Giovanni and Rigoletto, but in Rossini’s oeuvre it did not engender any enduring Rossini masterpieces, as have comedy and tragedy — the 2015 Pesaro production of La Gazza Ladra, Rossini’s only other semiseria, directed by Damiano Michieletto, definitively finished off its bid for masterpiece status.
Strict semiseria genre norms require a basso buffo, and Torvaldo and Dorliska obliges with the Duke of Ordow, played just now by none other than Nicola Alaimo, Pesaro’s recent William Tell. Mr. Alaimo is a performer of stature and of great presence, and is a powerful singer who evokes sympathy. These attributes confused this current Pesaro edition of,Torvaldo e Dorliska (a remount of its 2006 production directed by Mario Martone). 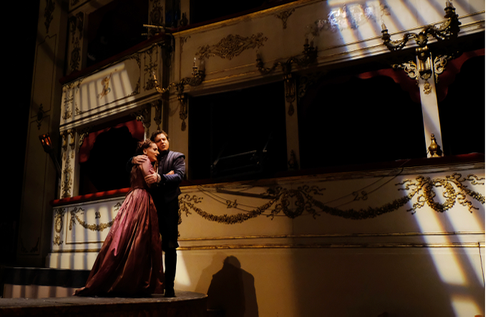 Salome Jicia as Dorliska, Dmitry Korchak as Torvaldo
The Duke of Ordow is smitten by Dorliska, recently married to Torvaldo whom the Duke assumes his thugs have murdered. Not so. The wounded Torvaldo is taken into the Duke’s castle by its gatekeeper. Meanwhile Dorliska, abducted into the castle, is slapped around by the Duke to try to get her to marry him. Everyone rebels against the Duke for various reasons and he is led off to prison.
After all that we were quite confused as we had come to like Mr. Alaimo even though everyone on stage hated him.
Director Mario Martone and his designer Sergio Tramonti set this Polish tale somewhere with lots of thick foliage, all the better to mask his thugs as they came and went, and finally hide the revolutionaries as well. The setting had all the atmospheres of incipient Romanticism. But Rossini’s libretto was largely a farce of the type that plays best under bright lights.
Besides the un-Romantic brutal slapping of Dorliska Mr. Martone offered some extreme, un-Romantic schtick as well — Ormondo, the Duke’s lieutenant climbs a tree singing his aria, and falls out still singing (he was caught by his friends), and as the revolutionary movement gained momentum thousands of “Viva Rossini” leaflets rained down upon us from the auditorium’s rafters. 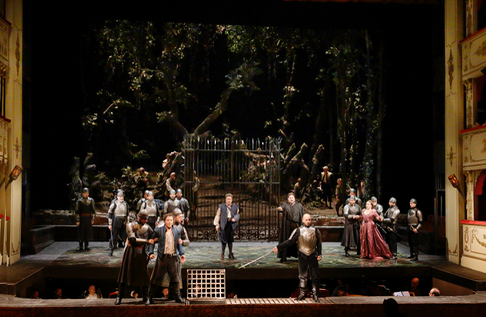 The entire cast in the Act II finale
As usual in Pesaro there were fine singers who created this evening of pure delight. Of particular note was young Georgian soprano Salome Jicia as Dorliska who raged and spat in secure Rossinian language, and Russian tenor Dmitry Korchak who delivered Torvaldo with aplomb though missing was an innocence and charm we might have liked in this young lover. Pesaro regular, bass Carlo Lepore convinced us as the duplicitous gatekeeper (we sympathized with his employer). A former participant in the Pesaro’s Accademia Rossiniana, baritone Filippo Fontana was the soldier who fell out of the tree singing.
The greatest pleasures of the evening were being in the Teatro Rossini, a typical Italian horseshoe theater of perfect size for minor Rossini, the able orchestral playing of the Orchestra Sinfonica G. Rossini under conductor Francesco Lanzillotta who found the real Rossini, and most of all it was a lot of fun to have the opportunity to explore the ideals and the potential of opera semiseria in this production of undeniable charm.