We were all eager participants, harangued lengthily and forcibly by a high priest of the Greeks to accept martyrdom. Some of us were actually absorbed into the crowds of the condemned citizens of Corinth transfixed by the priest’s ecstatic vision of freedom.
Uncompromising in its pursuit of the purest Rossini, this Italian high-art Festival provided supertitles only in French for this new, hyper-researched critical edition of Rossini’s first “grand” opera for France, said to musically recreate its original performance on October 9, 1826.
Thus Rossini’s five second act ballet divertissements were reduced to the three that the Paris Opera allowed at the premiere — though in Pesaro there was not a dancer in sight. Mahomet II, transported by his love for Pamyra wandered amidst the plastic bottles during the first divertissement, Lord Byron’s verses (in four languages) were projected line by line for the second, and members of the theater collective, La Fura dels Baus, fought over a bottle of water for the third.
After a few moments of indecision the audience booed its disapproval, but only half-heartedly.
This famed theater collective had envisioned the production of this musical reproduction of the 1826 event with deft, intellectual whimsy, finding in the plastic water bottle metaphor sufficient depth to intrigue if not enlighten the audience for the nearly five hour duration of the performance. That the massive walls of bottles sparkled brilliantly in the lights, and collapsed magnificently and elegantly (yet quietly enough not to cover Rossini’s magnificent music) more than adequately fulfilled French grand opera’s requirement for spectacle. Not to mention several important, enigmatically-imaged banner filled parades through the audience. 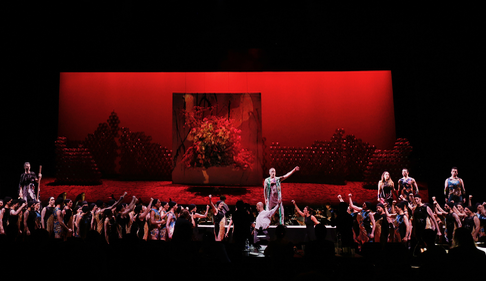 The high priest HiÈros leading the Corinthians (chorus mixed with some spectators) to martyrdom, Corinth in flames.
This flashy, beautifully staged and very successful production surely atones for the festival’s lackluster 2008 production of Maometto II, Rossini’s original 1820 Naples version of this Paris re-write (though the young general Calbo was memorably etched in Pesaro by Daniella Barcelona). The French had long forbade castrati (evidently trouser roles as well) thus this same young general now named NÈoclËs was sung just now by Russian tenor Sergey Romanovsky.
Rossini had broken new ground in Maometto II, thinking in larger and more complex dramatic blocks. But he allowed himself one huge aria scene and it was for NÈoclËs — the Russian tenor soared in impeccable fioratura to a high “C” (at least) praying to God to save the Greeks. This magnificent aria earned the one huge ovation of the evening. Note that Rossini’s advanced style precludes pauses for applause. 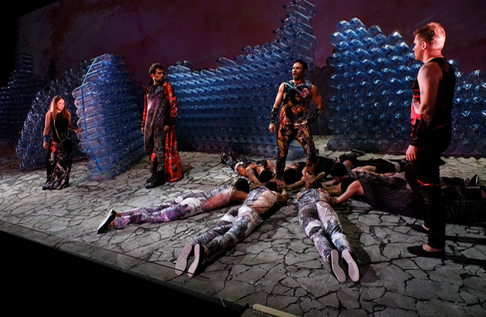 Left to right: Pamyra, Mahomet II, NÈoclËs, Omar
The overwhelming conflict of the evening was love versus duty. The Greek princess Pamyra loves the Turkish sultan Mahomet but her responsibility is to her father and to her homeland, and to her Greek fiancÈ NÈoclËs. Georgian bel canto diva Nino Machaidze suffered as only great Rossini divas may. This remarkable artist brought a musical intelligence that informed every phrase, suffusing the complex vocal lines with a unique expressive gravitas in richly colored voice.
It was indeed a brutal conflict of love and duty, all the more so because Mahomet, Luca Pisaroni, was very handsome in his red regalia, imposing in stance, and convincing in voice (Mr. Pisaroni is a well-known Neapolitan Maometto II as well). Rossini proved the enlightenment of this Muslim general who conquered Corinth by giving him an aria in which, stating his love of the arts, he declares he will not destroy Corinthian monuments. There was some applause.
To the festival’s good fortune Torino’s RAI Orchestra Sinfonica Nazionale found its way into the pit of Pesaro’s Adriatic Arena (changing regional financial structures have destroyed the festival’s long time association with Bologna’s Teatro Comunale). As expected from a symphony orchestra there was elegance of tone, limpidity of texture, and an easy virtuosity, attributes that responded to the transparency and clarity of score imposed by conductor Roberto Abbado.
With such resources Mo. Abbado uncovered instrumental sonorities new to Rossini’s advanced style, and clarified the dramatic and musical intelligence of the expanded structures of the numbers that included combinations of arias, duets, trios and ensembles. The maestro achieved the rare and ephemeral plateaux of sustained lyricism that create absolute opera.
Each August we Rossinians make our pilgrimage to Pesaro, his birthplace, in search of such transcendental evenings.
The casting of Le SiËge de Corinthe was uniformly effective. British tenor John Irwin sang Pamyra’s father King ClÈomËne, adding additional tenorial splendor to this evening. The high priest HiÈros was lustily intoned by Italian bass Carlo Cigni. The Greeks and the Turks, and there were a lot of them, were energetically enacted by the fine chorus of Teatro Ventidio Basso (the opera house of Ascoli Piceno, a small city in Le Marche, the same province as Pesaro).
Michael Milenski