At the renowned Philadelphia Museum of Art they presented War Stories, a double bill of Monteverdi’s brief madrigal Il combattimento di Tancredi e Clorinda paired with the contemporary I Have No Stories To Tell You by composer Lembit Beecher and librettist Hannah Moscovitch.
Through no fault of the musical or production quality, which was unfailingly high, it was somewhat dispiriting to observe a pairing about the devastating consequences of war written in the 17th century with one written in the 21st century, realizing they bookend four centuries of nearly constant war in between.
The Monteverdi is staged arena style in the cloisters exhibit, the audience seated around the perimeter of the columned edifice with the fountain in the middle of the playing space. En route to the show, we passed through hallways dotted with mid-20th century army cots, dressed with props from barracks life: playing cards, magazines, cigarettes, etc.
Owing to the subdued lighting, we don’t much notice at first that there are two cots in the inner cloister, on which people are asleep. They turn out to be Tancredi and Clorinda. Craig Verm has a potent presence as Tancredi, his virile baritone burning up the confines of the small room. Cecelia Hall’s meaty mezzo matches him in fierce intensity as Clorinda, and both of them summon heart-rending color in their phrases of anguish and defeat. The single narrator role is here split between Samuel Levine and Abigail Levis. Both are remarkably fine, Mr. Levine’s pointed tenor often lashing the air excitedly with aggressive pronouncements, and Ms. Levis notably investing her plangent mezzo with considerable emotional subtext.
The compact composition packs a lot of confrontation and reaction into 20 minutes and the vocal effort was heightened and well partnered by a tight ensemble of period instrumentalists under the smooth direction of Gary Thor Wedow. The design elements were limited to some shadowy, threatening lighting effects devised by Mary Ellen Stebbins, including hand held mini-spots ferried around the action by nimble, squatting extras. I didn’t fully understand Kaye Voyce’s futuristic black one piece uniforms, with hoods and veiled mouths, meant to be armor, but they were definitely a “statement,” and the deliberately delayed reveal of the face and heads of the title characters was fulfilling. As Tancredi carried the lifeless body of Clorinda out of the room, the audience seemed not to want to break the silence with applause. Moving. 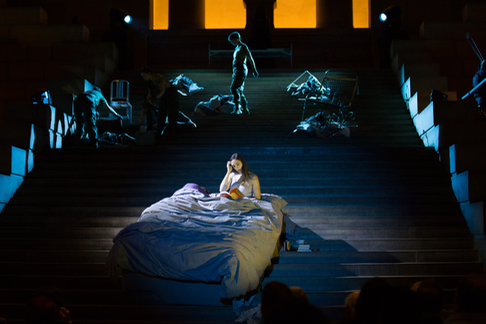 Cecelia Hall as Sorrel
Beecher and Moscovitch’s I Have No Stories To Tell You was staged on the museum’s imposing grand staircase, and proved to be disturbingly contemporary. It continues the theme of a tragic rift between lovers, but here it involves PTSD and its devastating consequences on a young married couple. Just as armor had obscured Tancredi and Clorinda from each other, here the “armor” of painful memories keeps the lovers from knowing each other fully.
As the service member Sorrel, Ms. Hall turned in a searing vocal performance as a broken woman ravaged by her war experience, her portentous mezzo imparting tremulous weariness and dread as she tries to hang onto her sanity with fingertips of steel. Mr. Verm is achingly vulnerable as her loyal husband, the care and anguish and frustration palpable in his honeyed baritone. Samuel Levine weighted his focused and secure tenor to underscore nagging questions surrounding Sorrel’s enigmatic fellow soldier Noah. A mini Greek chorus that is an unwelcome guest in Sorrel’s mind provides atmosphere, musical texture and commentary. The trio is exceedingly well-matched and wonderfully sung by Sarah Tucker (Memory 1), Rachel Calloway (Memory 2), and Abigail Levis (Memory 3).
Director Guarino took advantage of the different levels to suggest who is influencing the most power over Sorrel at any given point. The couple’s marriage bed is furthest down the staircase and closet to the audience. The husband rarely gets above this level, so diminished is he in the equation. The Memories haunt Sorrel by scurrying about, disrupting the peace, scattering household and battlefield detritus over the stairs. The flashback friend (or is he?) Noah moves deliberately, a gnawing presence hovering over the solvency of the marriage, and a key part of the shocking revelation. The director has elicited emotionally fearless performances from her principles. Ms. Voyce’s apt costumes and Ms. Stebbins’ moody lighting both achieved much with economy of means. Daniel Perelstein’s well-considered sound design added restlessness and danger to the mix.
Ms. Moscovitch’s lean, mean script hits all the right points, and composer Beecher has crafted a unique and stirring sound world for this fluid character study that spans time and place. His writing for the vocalists was very grateful, and scoring it for nearly the same Baroque instrumentation as the Monteverdi was inspired. Maestro Wedow once again provided a luminous reading, ripe with heart and hurt. The subtle lengthening of the flashback episodes in turn as they recurred was a masterful idea and the cumulative revelation of back story was rewarding.
The only thing I might urge the producers to do is tighten up the sequence of events. The group had to split in two for the first piece, but 30 minutes was too long to just chill in the armor exhibit, waiting our turn for the cloisters show. Too, the intermission after the first show was far longer then necessary for the actors to do modest costume changes, and valuable momentum was lost.
Musically, this was a first rate event. Dramatically, I felt it ultimately lacked a fulfilling point of view. War is bad. Of course. War spurs personal tragedy and spares few. At the end of the event, a “button” was needed. I “think” the company wanted us to contemplate how – given the violent history of the world – how we might change course and eliminate war. The second piece, written to complement the Monteverdi “might” have had the opportunity to steer that thought, but chose not to do it, remaining rooted in the parallel tragedy.
Alternatively, perhaps a chaired talk back or discussion could have been offered about enabling peace to break out, or inspiring something, anything positive that could be taken home, prompted by what we had collectively experienced. As it was, I left a dramatically disturbing, musically refined event that took a little too long to unfold, musing I had perhaps just been at the “feel bad” event of O17.
James Sohre