The O17 festival has appropriated Barry Koskie’s acclaimed eye-popping production and cast it from strength with some of the finest young singers to be found on today’s opera stages. Mr. Koskie has co-directed with Suzanne Andrade and the pair has collaborated closely with the prodigiously gifted animator Paul Barritt to create a non-stop display of morphing projections that are both the production’s unique achievement and ultimately, its weakness.
Ben Bliss was a sweet-voiced Tamino, his pliant lyric tenor a perfect match for the Prince’s vocal demands. Mr. Bliss soared above the staff with an ingratiating ease of expression. Rachel Sterrenberg had a slower start as Pamina, her substantial soprano feeling its way through Bei M‰nnern. As the show went on, Ms. Sterrenberg warmed to her task and settled in to provide a limpid, affecting Ach, ich f¸hl’s. In the final quartet Ben and Rachel’s intertwined lofty phrases fell quite wondrously on the ear.

Queen of the Night and Tamino
Jarrett Ott had all the wit and presence one could want in a Papageno, and you won’t often hear the role this well sung. Mr. Ott’s shining baritone has real star power and beauty. Olga Pudova was an audience favorite as a highly musical and secure Queen of the Night. Her pleasing tone and technical accomplishment made for two memorably accurate arias. Bass Peixin Chen did double duty as the Speaker (sung offstage) and Sarastro (sung mostly onstage). His weighty, orotund bass was darkly imposing, although it had a tendency to lumber a bit from note to note. Brenton Ryan’s well-projected, sizable tenor served Monostatos well, and his insinuating coloration of key phrases made for some inspired villainy.
The Three Ladies were a pleasantly compatible trio, with soprano Ashley Milanese a sprightly First Lady, mezzo Siena Miller holding her own in a solid turn as Second Lady, and mezzo Anastasiia Sidorova grounding the group with a firmly intoned Third Lady. The Three Spirits were a delight in their every appearance: AJ Owens, Damian Ferraro, and Patrick Corcoran were well schooled, pure-toned and cherubic. Ashley Robillard was such an appealingly pert soprano that she managed to score big as Papagena even though her role in this cutting was nearly non-existent.
The Armored Men are often cast with more mature singers so it was a pleasure to hear two fresh young vocalists bring brightness and poise to their ‘choral prelude’ and, especially, the quartet. Roy Hage (First Armored Man) sports an engaging, ringing tenor, and Marcus Deloach (Second Armored Man), serves up a vibrant baritone. Elizabeth Braden’s chorus was stirring in their brief, but important appearances.
In the pit, conductor David Charles Abell led an assured overture, in what would be the only visually unanimated music of the performance. Once the “fun” began, Maestro Abell did his considerable best to keep reminding us that the opera is really about sublime music and immortal characters, not just shock and awe video effects. He was sometimes stymied by the distraction. Perhaps owing to placement of singers, the ensembles (only) occasionally got ahead of the beat, with the Three Ladies being the most challenged in their tricky banter. 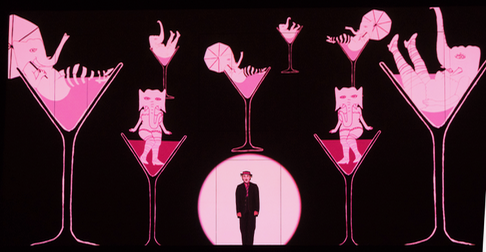 Jarrett Ott as Papageno
This animated, manic concept seems to have given a good deal of pleasure to the vast number of audience members. It is certainly unlike any other. There is no doubt that the non-stop coordination of effects was a challenge, one that was always meticulously achieved. Papageno must siphon a pink lady out of a cocktail glass by “sucking on a straw” as it empties. Pamina must act threatened by a pack of snarling dogs that Monostatos has tethered, straining on a leash. Tamino must “pop” heart balloons floating above his head with his pointed index finger just at the right time. All tricky stuff, admirable to behold. But here’s the thing:
The characters were never allowed to interact with each other or, more critically, with the audience. They were mostly required to stand stock still in a prescribed spot, and everything happened to them or around them, but not with them. Do we really want the Queen of the Night vocalist to be reduced to a disembodied head while the animation attached to that head bombards us with an overused image of an attacking spider? There was so much cute commotion of appearing children during Papageno and Papagena’s duet that Mr. Ott and Ms. Robillard could have had a sparkler in their teeth and we would have been hard pressed to notice them.
Consequently, these appealing characters were never allowed to bond with each other or the audience. This was not like the integrated animation of say, Mary Poppins, where the imagery was a clever party trick that enhanced the live characters. In this Flute (which, by the way had no flute at all!), I had the feeling the whole shebang could have been animated with these wonderful singers in the pit without much change in the experience. For the record, Esther Bialas’ stage and costume design were manic and colorful; Christopher J. Hetherington’s lighting design complemented (read: stayed out of the way of) the projections; and David Zimmerman’s wig and make-up design provided fanciful whimsy.
With the dialogue completely eliminated and the plot advanced by projected blunt silent movie exclamations, the humanity of Mozart’s masterpiece seemed limited to the level of a complicated video game, albeit with superlative background music. Remember the music? Remember when The Magic Flute had, well, a magic flute? Me, too. . .
James Sohre