As we journey from the dungeon-esque darkness of the Queen’s nocturnal
demesne towards the gleaming sun-disc which bathes the final chorus in the
luminosity of enlightenment, a Dantesque night is truly turned into day.

, I found the performance, while elegant and slickly choreographed,
‘disappointingly lacklustre’ and missing the sparkle of ‘simple youthful
vitality and dreamy enchantment’. Reflecting again, perhaps some of my
disenchantment derived from a perceived imbalance, on that occasion,
between allegory and artifice.

For, while some lines of the opera’s libretto are based on sources used by
the Freemasons, whose symbolism scholars have sometimes purloined in order
to argue that a hidden masonic allegory underpins the opera’s quests and
initiation rituals, in fact many of the magical and ‘marvellous’ episodes
derive from earlier operas, pantomimes and comic plays that would have been
well known to the audiences at Schikaneder’s the Theater auf der Wieden,
and I am of the view that any elements of ‘freemasonry’ that are present
are far less important than those of fairy-tale. 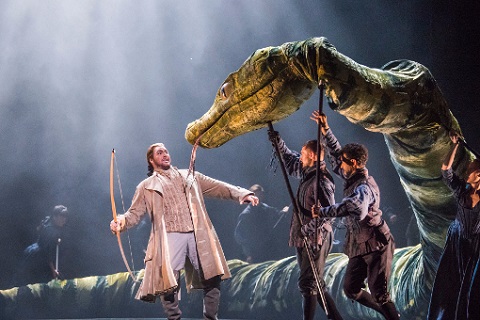 During this performance, however, as the giant segments of the serpent
wiggled and waggled, expertly manipulated by the puppeteers, and the marble
columns of hallowed halls slid imperiously into dignified place as the
orrery spun in heliocentric harmony, it was the opera’s human concerns that
seemed more compelling than any abstruse philosophising.

And, for this more harmonious union of folky comedy and high seriousness,
we have Roderick Williams’ effortlessly warm-voiced Papageno to thank.
Williams is a seasoned bird-catcher having taken the role in several
productions, including Nicholas Hytner’s ENO long-lived production and Tim
Supple’s ‘grungy’ Flute at Opera North. But, even so, this
Papageno has some way to go before his earns his stripes as master of the
aviary. Outwitted by a puppet goose – I remember, too, an ‘incident’ with
some recalcitrant real-life doves at ENO! – he eventually learns his own
tricks, making the Priest’s feet (Harry Nicolls) dance to Papageno’s tune
in ‘Ein M‰dchen oder Weibchen’. Williams evinces an easy physicality which
never drifts into farce and heaps of appealing guilelessness: who would not
be touched by fellow-feeling when this Papageno humbly voices his simple
desire for love and happiness? His cheek and charm certainly earn the
bird-catcher his perky Papagena-in-pink, though one suspects that he will
have trouble preventing Christina Gansch’s sassy slapper from
fluttering her feathers from time to time. 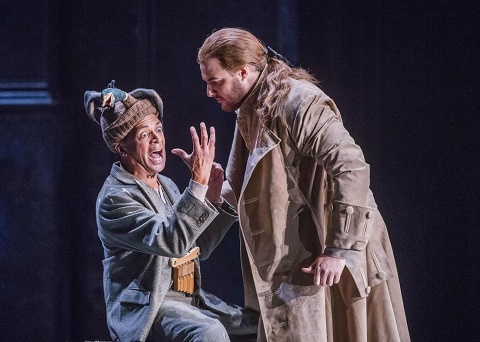 Williams’ expert comic timing was matched by that of Peter Bronder’s
Monostatos. There was a ‘nasty’ edgy to this villain’s lasciviousness
which, together with the masked beasts and vultures, suggested a darker
vein in the pantomime.

Several of the cast are making their Covent Garden debuts and this was a
significant incentive to see this revival. In particular, I was very keen
to hear French soprano Sabine Devieilhe scale the Queen of the Night’s
stratospheric peaks, having greatly admired her performance as Bellezza in
Handel’s


at Aix-en-Provence in 2016. And, she didn’t disappoint: ‘O zittre nicht,
mein lieber Sohn’ was absolutely secure and clean-toned, but ‘Der Hˆlle
Rache kocht in meinem Herzen’ simply took my breath away. I’m not sure how
such a glacial tone can intimate ‘warmth’ or fullness, but somehow
Devieilhe managed not just to hit the top Fs but to shape and soften them. 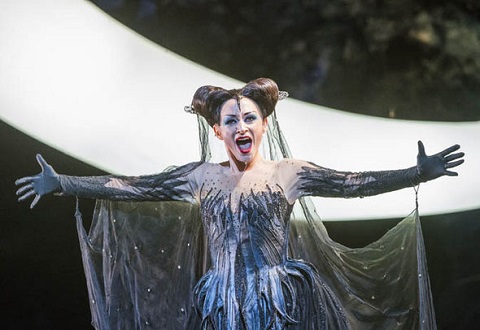 at the Sam Wanamaker Theatre at Shakespeare’s Globe in 2015, noting that
she combined ‘a ravishing tone with pinpoint accuracy.’ The purity and
richness of Stagg’s tone were put to good effect in her interpretation of
Pamina’s gentle innocence, for she infused the lovely sound with a firm
glint which suggested that beneath Pamina’s naivety lie integrity and
resilience. ‘Ach, ich f¸hl’s’ was unsentimental but deeply communicative,
though I wondered whether Stagg would have liked conductor Julia Jones to
have taken her foot of the pedal slightly – the aria followed rather
precipitously from the preceding aria although Stagg’s poise steadied the
ship. 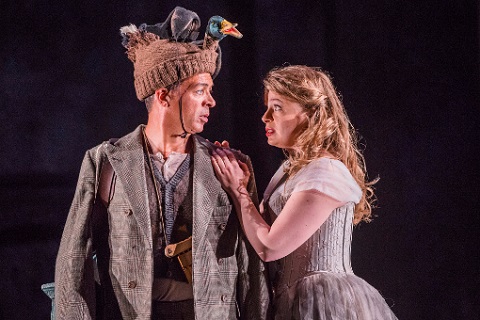 Mauro Peter’s Tamino might have had a little more ruggedness, but the Swiss
singer has a lyric tenor of great beauty and the polished artistry of his
phrasing and his careful diction certainly made his ‘princely’ mien
convincing: ‘Dies Bildnis ist bezaubernd schˆn’ was tenderly love-struck. I
found that Finnish bass Mika Kares lacked the sonorous weight needed to
convey Sarastro’s authoritative sobriety – though I note that those who saw
earlier performances in the run disagreed.

The three boys – James Fernandes, Oliver Simpson and Jayden Tejuoso –
struck just the right balance between real boyish charm and pure
otherworldliness. Their three voices blended beautifully to form a single
gleaming thread of innocence and light; if one shut one’s eyes, one really
could believe that they had descended from celestial realms. But, their
interventions, preventing tragedy, were genuinely human. The three Ladies
were less consistent, Rebecca Evans, Angela Simkin (a Jette Parker Young
Artist) and Susan Platts coming adrift at times in terms of timbre and
temperament, and, occasionally, tuning.

Jones’ tempos were swift. As in 2013, I wished for a more spacious
composure at times for the opera presents both fury and sobriety, but I
enjoyed the ROH Orchestra’s sure sense of period style.

Revival directors Thomas Guthrie and Angelo Smimmo (movement) have made a
good job of polishing the ROH’s silverware and McVicar’s production
continues to shine. At the closing curtain, Macpherson’s sun-disc seemed a
perfect metaphor for Mozart’s opera: radiant and eternal.


The Magic Flute runs in repertory at the Royal Opera House until 14
October.