That is marketing shorthand for Philadelphia Opera Festival 2017, and in longhand, this is a nonpareil, landmark event.
Never was this more evident than at the world premiere of We Shall Not Be Moved, a musically compelling and deeply moving new piece of lyric theatre by composer Daniel Bernard Roumain and librettist Marc Bamuthi Joseph.
Five North Philly teens are on the run to avoid arrest after unintended involvement in several tragic incidents. They seek refuge in the abandoned house that served as the headquarters for the MOVE organization, where a 1985 standoff with police infamously ended with citizens dead and a neighborhood destroyed. As this disparate, self-defined family takes refuge, they unexpectedly find inspiration in the ghosts who linger in the historic residence. Their initial fear transforms first into resistance, then destiny. 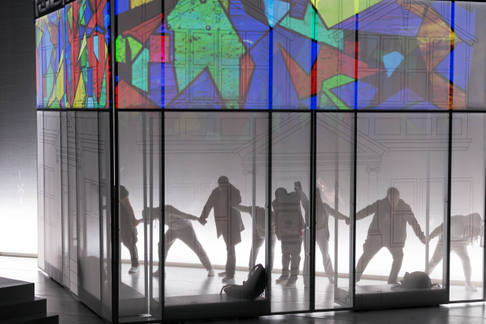 Family Stand and the OGs come to live in an abandoned home on Osage Avenue. Photo by Dominic M. Mercier
Mr. Roumain’s genre-defying score is not only often earthy but also just as frequently ethereal, and seems poised to freely move between the two extremes. He is equally at home writing in classical style, injecting jazz riffs, or hunkering down into pulsing R&B, but this score is filtered through a unique lens of self-invention. Mr. Joseph’s edgy libretto blends poetry, prosedy, spoken word, street slang, and rap into a masterful expressive vocabulary that often seems a laser-focused response to current race relation headlines.
A third collaborator is the renowned director, choreographer, dramaturge and dancer Bill T. Jones who completes the triumvirate responsible for this piece he calls “ambitiously interdisciplinary.” Mr. Jones brings together contemporary movement, video projection, staggeringly powerful stage pictures and deeply explored characterization to unite his abundantly talented cast, crew and creative team.
Lauren Whitehead, a noted spoken word performer and writer brings her substantial gifts to the role of Un/Sung, the central teenage figure, narrator, and surrogate mother whose determined journey binds the other family to her. Lauren holds her own with her operatically trained colleagues, singing with secure sincerity. As her counterpart, the policewoman Glenda, luminous mezzo Kirstin Chavez turns in a galvanizing performance. As her assured, tough love authority is reduced to a legal predicament not of her making, Ms. Chavez invests her character with intense, conflicted duality. And, Lisa is possessed of a particularly attractive mezzo, for which the composer provided some of his most urgent and limpid phrases. Hers was a touching and beautifully crafted portrayal.
The gifted counter-tenor John Holiday threatens to walk away with any show he is in. On this occasion, Mr. Holiday deploys his distinctively pointed, high-flying instrument to not only cry out some R&B licks that challenge Mariah Carey, but he also reined in his sassy delivery to create a heartbreaking, internalized impersonation as a bullied trans man. I will not soon forget the tears that fell in the audience as John sang pitiably about his binding himself at peril of bullying to become who is, and not the gender he was born to. 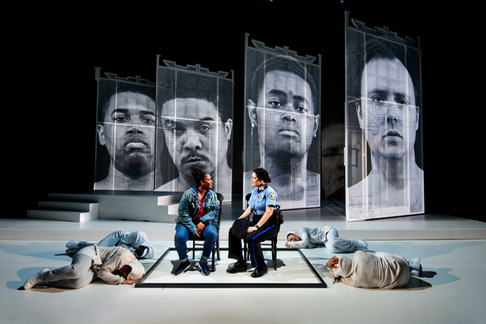 West Philly cop Glenda (mezzo-soprano Kirstin Ch·vez) asks Un/Sung (spoken word artist Lauren Whitehead) why her and her brothers are not in school. Photo by Dave DiRentis
Powerhouse bass-baritone Aubrey Allicock commanded the stage as John Henry, prowling the perimeter with restless purpose and howling out jazz licks with obvious delight. His middle and upper range have acquired an admirably burnished sheen over time, and his legit operatic phrases were fulsome and fearsome. John Mack was played by Adam Richardson, handsome and sympathetic of presence, who sang with a characterful, grainy, immensely appealing lyric baritone. Daniel Shirley rounded out the family as John Little, able to color his smooth lyric tenor to suggest real danger and aggression.
As soloists, these fine artists were commendable. As an ensemble, they were perfection. Thanks to Mr. Jones, this group of accomplished pros sang together, loved together, danced together and suffered together, forming the beating heart that was key to this production’s total success. They were ably abetted in their excellence by four tireless, omnipresent dancers as the OG’s (ghosts) who inhabit the historic sacrificial grounds. These lithe, expressive, generous artists provided a writhing, body slamming, break dancing commentary on every nuance of the unfolding drama and they are: Michael Bishop, Duane Lee Holland, Jr., Tendayi Kuumba and Caci Cole Pritchett.
Their choreographed contribution to the evening’s triumph included moving around Matt Saunders’ modular set pieces. Mr. Saunders has provided four flexible mobile wall units and a couple of simple stair and platform pieces that are chameleon-like and able to transform into any number of configurations and locales. Since they are white, they are amazingly receptive to Mr. Cousineau’s inspired projection design, which occasionally found dancers behind scrim panels being mirrored by dancer images on the screens in front of them. The sacrificial immolation effect was mesmerizing and shattering in its intensity.
Liz Prince’s costume design kept things simple but her attire really helped define the characters, and her white hoody riff for the ghosts was urban inspired. Robert Wierzel’s lighting successfully complemented the projections, always enhancing the look, never interfering. David Zimmerman’s tasteful sound design was effective without calling attention to itself.
While this was a monumental collaboration of many individual efforts, at the end of the day, Bill T. Jones was probably the overriding component in its success. I believe his assured melding of all the elements in this challenging new piece, and his artistic vision propelled We Shall Not Be Moved from the merely excellent to the profound. We “were” moved. Future audiences “will” be moved. How could anyone “not” be moved by Opera Philadelphia’s towering, musically engaging, emotionally wrenching achievement?
James Sohre