The duo’s first hit, Silent Night, was so highly acclaimed that it could have proven a hard act to follow. So, the pair decided not to try for another large piece of sweeping scope and profound emotional calculation, and opted instead to create a 90-minute chamber piece in which wickedly complex characters and lurid plot twists threaten to out-Sweeney Sweeney Todd.
No spoiler alert needed, the opus starts with the hanging of Elizabeth as punishment for the murder of her husband John. Set in London, 1887-1881, the tale subsequently unfolds in twenty-nine cogent scenes that go back and forth in time, narrating the murder mystery in mosaic fashion, interweaving titillating red herrings, finally revealing the truth in a shocking confession. Even better than Mr. Campbell’s often witty, always riveting text, Mr. Puts’ eclectic score falls tunefully on the ear one moment, and is eerily stomach-churning the next. Borrowing from several styles and influences, the talented composer re-invents them with excellent effect to present his own unique voice.
If one is going to make an effective case for a new opera, it does not hurt to have at your disposal the best cast imaginable. Daniela Mack is at the peak of her considerable powers in the title role, her rich, gleaming mezzo soaring into the house with lustrous beauty. The creators (including novelist Peter Ackroyd’s source material), have imbued this character with detailed layers that surpass even Lulu as opera’s most complex character. Is Cree merely a determined young woman pulling herself up into society from an impoverished beginning? Or are there more dynamics to consider?
Ms. Mack communicates many, if perhaps not all, of Elizabeth’s dimensions. The role is too complicated to unearth every nuance in the course of one production period. But Daniela has certainly conquered every subtlety and shading in the wide variety of styles she has been given to vocalize, from melting lyricism to music hall sass, to urgent dramatic declamations, to ecstatic arching phrases. Hers is an uncommonly fine instrument, and this definitive role creation has set the gold standard for all future productions. 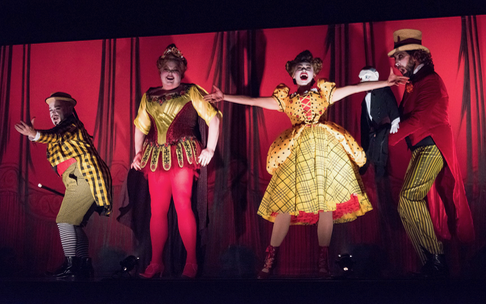 Little Victor Farrell (tenor Jason Ferrante), Doris the Wire Walker (mezzo-soprano Melissa Parks), Aveline Mortimer the Wide-Eyed Warbler (soprano Deanna Breiwick), and Uncle (bass Matt Boehler) entertain the crowd with a variety show.
Threatening to run away with the show, tenor Joseph Gaines is a tour de force as the wiry, wily Dan Leno. Mr. Gaines is arguably one of the finest, most complete singing actors in opera today, and he commanded attention whenever he was on stage. Assuming any number of guises (including uninhibited drag) as a headliner in the music hall segments, he is agile, fleet-footed, energetic and wickedly entertaining. When he drops his performer persona and becomes Leno the man, he is equally capable of engaging our attention with warmly communicated humanity. Moreover, Joe has a wonderfully schooled, innately appealing tenor that is capable of lyricism of considerable beauty.
Troy Cook was a powerhouse vocal presence as the duplicitous (or is he?) John Cree, who woos and weds Elizabeth. Mr. Cook lets loose with such a darkly powerful baritone that his singing is literally spine tingling in several rather malevolent moments, memorable for their uncompromising, laser like intensity. But is he indeed the victimizer, or might he be a victim? His well-modulated, charming vocalization in more lyrical passages not only provides a good measure of vocal allure, but also raises the stakes in a deadly and unpredictable game.
It is always a pleasure to encounter the gifted young baritone Daniel Belcher, and he predictably delivers all the goods as Inspector Kildare. Mr. Belcher finds an assertive smugness to color his ringing baritone, and his self-assured, poised singing was even and focused throughout the range. Moreover, he conveyed a seductive wit in his impersonation of the self-promoting detective. Deanna Breiwick deployed her alluring, silvery soprano to good effect as the ingÈnue, Aveline Mortimer, singing with utmost assurance, especially in several sublime stratospheric flights of fancy. Ms. Breiwick also injected some real grit and passion into the mix with her determined, vengeful testimony at Elizabeth’s trial.
Elizabeth begins her escape from poverty by getting a job as a prompter at the music hall, where other on- and backstage denizens include Uncle (firmly intoned by bass Matt Boehler), Doris (Melissa Parks, showing off an earthy and rock solid mezzo), and Little Victor Farrell (Jason Ferrante, with a sympathetic tenor of good presence). A prodigiously talented roster of soloists rounded out the cast, successfully doubling all of the other parts. Jonathan McCullough (Mr. Greatorex/George Gissing/Etcher) offered a baritone of solid accomplishment; Thomas Shivone (Mr. Lister/Karl Marx/Solomon) scored with his substantial bass-baritone; Daniel Taylor (Priest/Librarian/Mr. Gerard) proved a mellifluous bass talent you should watch for; and Maren Montalbano (Jane Quig/Annie the Serving Girl) completed the impressive cast with her pleasant, pliant mezzo.
Conductor Corrado Rovaris clearly relished his assignment and led the new composition with sweeping passion, dramatic investment, abundant lyricism, and great attention to detail. Mr. Puts’ lean orchestration utilizes an intriguing array of colors and inventive combinations of sound palettes and effects. Maestro Rovaris has wrung every last bit of variety out of the score, seguing effortlessly from neo-Romanticism to Grand Guignol to popular novelty numbers to wrenching scenas and back again. His total command of the musical effects yielded an eminently satisfying piece of lyric theatre. 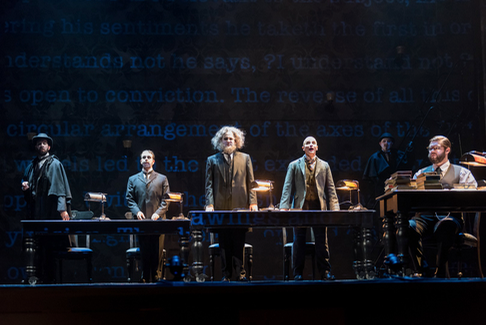 The inhabitants of the Reading Room continue their studies.
Mr. Campbell’s episodic hopscotch of a book jumped back and forth in time from courtroom to street, music hall (on stage and backstage), prison, home, police headquarters, well, you get the idea. Director David Schweitzer paced the show immaculately, investing it with fluidity and variety. For the music hall numbers,
Jesse Robb contributed simple, effective choreography. Mr. Schweitzer and his design team made some excellent choices in the simple floor plan, and bold choices in the omnipresent, often disturbing projections and stunningly wide-ranging lighting design by Alexander V. Nichols.
Designer David Zinn’s atmospheric sets were beautifully evocative, with a superbly textured arrangement of walls. A semi-circle of dipping streetlights is affixed to the one furthest upstage. This playing space was complemented by carefully chosen set pieces (desk, chairs, make-up tables, etc.). A platform with a rolling ladder has a perch atop that is at once imposing and frightening in its great height. A show curtain flew in and out to create the onstage world of the music hall. In the last third of the show, a wall surprisingly opened stage right to reveal the Cree’s rich, red Victorian parlor, while three tables were placed left to create the reading room of the British Library.
Director Schweitzer moved his actors meaningfully through their paces not only emoting and relating in these various short scenes but also carefully staged to seamlessly change the settings. Mr. Zinn also contributed sumptuous costumes running the gamut from ravishing upper crust eveningwear to garish parodies of variety show costumes. David Zimmerman did yeoman’s duty designing the varied hair and make-up looks required.
Opera Philadelphia’s Elizabeth Cree represented a thrilling collaborative effort from a dream team of some of the world’s most accomplished music and theatre practitioners. Their concerted efforts have made a compelling case for this highly anticipated piece, which assuredly deserves a bright future of subsequent productions.
James Sohre