I’m not sure how many of the audience at The Grange for the first of two
performances of Jonathan Dove’s opera were Austen aficionados but the
foot-stamping reception that the full house gave the composer’s newly
orchestrated opera suggested that they thought he’d told a good tale.
Indeed, Dove and his librettist Alasdair Middleton, did provide us with a
charming entertainment which was stylishly and slickly staged by director
Martin Lloyd-Evans and designer Dick Bird, and I was undoubtedly in a
minority, though not wholly alone, in finding the opera more divertissement than drama.

Alasdair Middleton has drawn his libretto, largely, from Austen’s text but
the necessary omission of characters and incidents transforms what is often
seen by literary critics as a ‘problem novel’ into a comedy of manners
whose satire has been diluted. Little of the ‘darkness’ of the novel is
retained in the opera, and even when the protagonists undergo trials and
tribulations in the second act, the superficial characterisation of the
opening act prevents them acquiring a convincing tragic dimension.

There is little sense, for example, of the fear or passivity that Sir
Thomas Bertram’s autocracy inspires, and while Lady Bertram is
appropriately obsessed with her pug, unlike Austen’s original she is not
sluggish and distracted, rather as garrulous and assertive as Emma’s Miss
Bates, and she joins in the family theatricals and dancing with sprightly
spryness.

We have none of the preparative ‘back story’, which explains how Fanny
Price came to live in her uncle’s house, along with Aunt Norris, and other
than a brief allusion to Edward Bertram’s kindness to his young cousin,
there is little to establish the nature of Fanny’s ‘role’ in the household
– that is, to elevate her cousins by mere fact of her own lowly presence as
an ‘interesting object’. Thus, the aristocrats’ ‘benevolent plan’ is
deprived of its underlying self-serving motivations and Austen’s jibe that
aristocratic compassion is designed to benefit the benefactors is weakened.

In particular, there is none of Austen’s bittersweet irony; and, none of
what one critic describes as the novel’s ‘defiant potential’, reflecting
the debate between those who see Austen as a defender of the moral status
quo and those who see her as a satirical critic of the hypocritical social
mores of her day.

In the opera, Maria’s delight at the prospect of wedlock – “I’m going to
marry a country seat” – is not dented, nor the audience’s laughter
diminished, by her brother Edmund’s observation that, “If this man had not
twelve thousand a year, he would be a very stupid fellow”. And, when –
declining the opportunity offered by her father to extricate herself from a
lamented engagement – she admits that she has traded personal desire and
fulfilment for a Wimpole Street abode and £20,000 a year because marriage
to the weak-willed Rushworth will afford her “independence”, Austen’s
irony, even anger, at the insincerity of the notion that such social
contracts are ‘democratic’ is wholly absent. 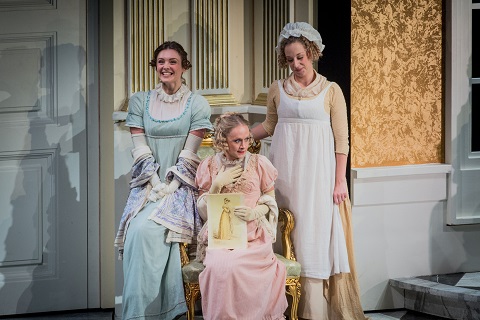 The omission of the Portsmouth episode deprives us of the symbolic
opposition of town and country, of artifice and nature. Moreover, Fanny’s
passivity, physical frailty and moral stasis – Kingsley Amis condemned her
as a ‘monster of complacency and pride’ – are not subject to scrutiny; as a
result, her unwillingness to cross the ha-ha at Sotherton lacks figurative
weight. Edmund’s explanation to the rebellious Mary Crawford that, “Every
sort of exercise fatigues [Fanny] so soon, except riding” is retained but,
deprived of context, we do not infer Austen’s criticism of Fanny’s
unwillingness to act or change. Given the largest vocal role, Fanny assumes
a centrality and ‘moral rightness’ which she does not possess in the novel,
and this is exacerbated when Henry Crawford reprises her words at the end
of the opera: “We have all a better guide in ourselves, if we would attend
to it, than any other person can be.”

There are some effective comic gestures and witty ensembles – the dining
room scene, ‘Landscape Gardening’, in which the Bertrams evince an
unnaturally vigorous enthusiasm to visit Sotherton to help the hapless Mr
Rushworth get his natural vegetation under control was deftly done, for
example. The amateur dramatics are made foolishly melodramatic by the
emotive rendition of the vivid ensemble, ‘Lovers’ Vows’. But, I found many
of the episodes more twee than Albert Herring – which, ironically,
was the opera which Britten composed when he’d abandoned his own plan to
compose an opera on Mansfield Park, and which does subsume some of
the probing satire of Maupassant’s original short story from which it is
derived. 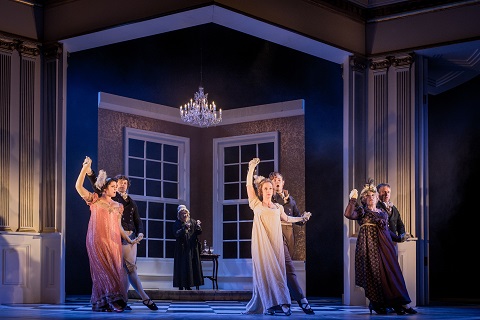 Perhaps I would have been less troubled by such matters had Dove’s score
held my attention more persuasively. Mansfield Park was
commissioned by Heritage Opera in 2011 and was originally scored for piano
four-hands (this version was reviewed by Opera Today when it was
revived by


in 2013). At The Grange, it was performed in a newly orchestrated version
for a chamber ensemble of 13 players (commissioned by The Grange Festival).

There is no doubting the composer’s ability to set text in naturalistic
vocal rhythms, and to create the sort of spare orchestral textures – often
just a single bassoon or piano line – which allow the words to be readily
discerned. The result is fluent theatre but also a certain predictability:
the vocal melodies run a predictable course; the instrumental patterns and
ostinatos recur and persist. Growing tension is sign-posted by increasingly
deafening timpani pounding accompanied by large vocal leaps. There are
passages that sound like Britten, others that resemble Sondheim.

I heard ‘Andrew Lloyd Webber’ on the lips of more than one audience member,
and while there may be nothing wrong with being mentioned alongside the
master of music theatre, I sensed that the comments reflected a perceived
lack of harmonic and structural sophistication, with which I would concur.
The waltzes of the ballroom scene spun over a descending ground bass which
put me in mind of Pachelbel’s Canon. Perhaps the neoclassicism was an apt
idiom for both the narrative and our performance venue, but the endless
arpeggiations and dance forms became tiresome.

As we swept through the narrative – each ‘chapter’ introduced by a choric,
or occasionally solo, summary pronouncement – I longed for some
spaciousness in which character and emotion could develop: the equivalent
of Austen’s penetrating focalisation. The characters exchanged bon mots
with rapidity and the first act contained scarcely a single ‘aria moment’,
although Fanny, disappointingly deprived of the opportunity to express her
inner life more fully in the ‘Wilderness’ scene, was given a moment of
exposition in Act Two. A ‘letter scene’ briskly dashes through the latter
events of the novel, effectively suggesting simultaneity of action but
glossing over the sort of discerning character motivation which might make
the happy ending more probable and persuasive. In the final scene, the
characters collectively declaim the opening of Austen’s final chapter: “Let
other pens dwell on guilt and misery. I quit such odious subjects as soon
as I can, impatient to restore everybody, not greatly in fault themselves,
to tolerable comfort, and to have done with all the rest.” The dismissal of
‘disorder’ did indeed feel rather hasty. 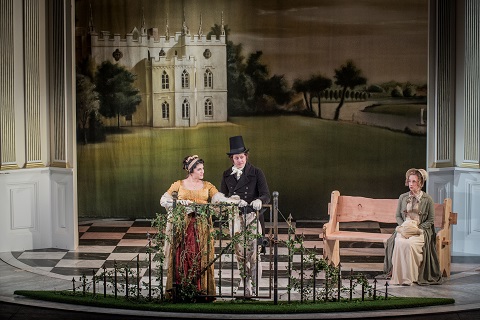 However, as I said at the start of this review, my misgivings about the
opera itself were apparently not shared by the majority of the audience,
and their pleasure was in no small part occasioned by Lloyd-Evans’ astute,
efficient direction and Bird’s charming design. Two imposing Classical
pillars (a nod to The Grange’s imitation Greek Temple faÁade) positioned at
the edge of a revolving set, contained their own revolving
exterior/interior, allowing for fluent, often beguiling, transitions from
lounge to lawn, and from sunshine to starlight. Sotherton’s ‘wilderness’,
with its back-cloth vista ‡ la Gainsborough, was especially
elegant.

The cast, too, acquitted themselves very well. Emily Vine sparkled as the
ever more impetuous Maria; as her sister, Julia, Angharad Lyddon’s lyrical
mezzo almost burst with excitement at the pleasure inspired by the thought
of owning a barouche. Shelley Jackson’s big, forceful soprano was the
perfect conduit for Mary Crawford’s self-confidence and thrill-seeking,
while Martha Jones effectively projected Fanny Price’s combination of
righteousness and reluctance.

Henry Neill acted superbly as the caring but unknowing Edmund Bertram; his
strong baritone imbued the ‘younger son’ with moral maturity. Nick
Pritchard, too, made as much as he could of the caddish Henry Crawford,
while Oliver Johnston convinced in his sometimes poignant portrayal of the
ineffectual and foolish Mr Rushworth who nevertheless does all he can to
please his ungrateful, and unaffectionate, wife.

Grant Doyle exuded imperious authority as Sir Thomas Bertram – who, Austen
tells us, ‘had never seemed the friend of [his children’s] pleasures –
thundering one-word commands and declarations: “Antigua. Sugar. Bristol.
Plantation. Profit. Freight. Profit. Pride. Position. Posterity. Estate.” I
did not care for Sarah Pring’s interpretation of Lady Bertram, but she
relished her one-liners – “pug is getting peaky” – and her full mezzo
assisted her ‘larger than life’ portrayal. Jeni Bern didn’t seem anywhere
near snide enough as Mrs Norris, but she slipped neatly into the ensembles.