Second, summer downpours having necessitated removal into the Church of St
Mary’s, the nave of which was too small to accommodate BCO’s set, this
performance at SJSS provided an opportunity to see the opera as envisaged
by director/designer Jeremy Gray, in a simple staging the design of which
evoked the requisite air of intrigue and affectation. Certainly, the
performance which unfolded fulfilled both my cravings; and Gray’s set –
exterior stone becoming luxurious damask wallpaper at the twist of a hinge
or two – was beautifully composed and stylishly complemented Vikki
Medhurst’s Regency-style costumes. Yet, I came away contemplating the
difficulties of giving performances of a work over a time-span of a couple
of months in several venues (the opera was performed at Westonbirt School
in Gloucestershire in late August) that are so different in dimension,
acoustic and practicability.

That’s not to suggest that Bampton’s performance offered anything less than
their customary integrity, charm and slickness; just that, I was surprised
just how hard it was for the company to reproduce the intimacy and immediacy
that was generated inside the beautiful but fairly cramped church at
Bampton – through whose roof the deluge dripped courtesy of some lead
pilfering shortly before – on a wet July evening when compromise and
contingency seemed to inspire a spontaneity and piquancy which was
sometimes missing at SJSS.

Bampton Classical Opera have found Salieri’s operatic legacy to be a
fruitful source during their forays through the lesser-known repertory of
the eighteenth century. The company gave the UK premiËres of Falstaff in 2003 and two years ago their production of


was richly praised. This year they’ve resurrected an opera, written in
1778, which must have been on Lorenzo da Ponte’s radar when he penned CosÏ fan tutte (or, La scola degli amanti, the
librettist’s preferred title), with its jealous rants and
rages, amorous criss-crossing, and awkward reconciliations. La scuola de’ gelosi, with several new arias, was the
work which inaugurated Emperor Joseph’s new Viennese buffo troupe
in 1783. And, the casts of La scuola and CosÏ overlapped:
Francesco Benucci was Blasio in Salieri’s opera, and sang Guglielmo inCosÏ; Francesco Bussani followed his turn as the Count in La Scuola with Don Alfonso in CosÏ. Nancy Storace, a
Mozart favourite who created Susanna in Figaro was Salieri’s
Countess.

Caterino Mazzol‡’s libretto tells of marital discord and dissatisfaction,
supplemented with a heavy dose of class snobbery. The grain-dealer Blasio,
prone to prowling about in the dark intent on catching his wife Ernestina
with a lover, is overcome with paranoid jealousy and purchases a padlock to
lock her indoors. Meanwhile, Countess Bandiera pines, jilted by her
philandering husband whose chief amusement is wooing the wives of jealous
husbands – her indignation deepened by the fact that her husband is wooing
a pleb! She disguises herself as a gypsy fortune-teller, reads her
husband’s palm and, her identity disclosed, delights in his discomfort.
Bourgeoisie and aristocrats mingle and madness ensues – quite literally
when Blasio finds in an asylum, witnessing the fate of those whose
marriages have been poisoned by mistrust. The Lieutenant advises Blasio and
the Countess to get revenge by inciting their spouses’ jealousy.
Accusations rile, appearances prove deceptive, apologies follow;
eventually, an uneasy social and marital equilibrium is restored. 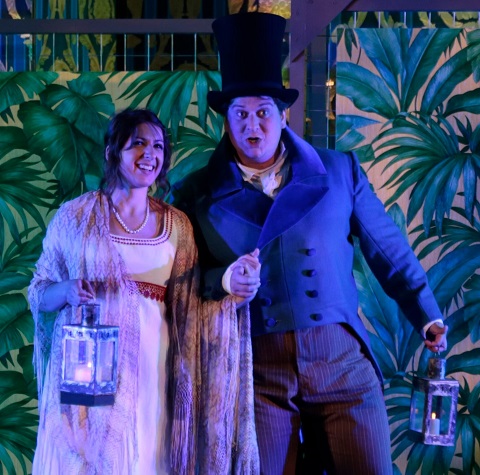 The splendid young cast revelled in the opera’s wiliness and wisdom,
although the SJSS acoustic diminished the clarity of the diction, meaning
that the wry rhymes of Jeremy Gray’s and Gilly French’s dry, crisp
translation raised fewer laughs than they had done at Bampton. But, the
obligatory topical references hit the target, as this opera about false
affairs inserted some ‘fake news’. When Blasio snatched what he thought was
a letter from an admirer from Ernestina’s hands, he found himself reading a
newspaper report: ‘Mexico may be blockaded with a wall to stop migration …
This may cause some agitation’, and he pondered ‘Is it open to discussion,
Mister Trump is surely Russian?’ 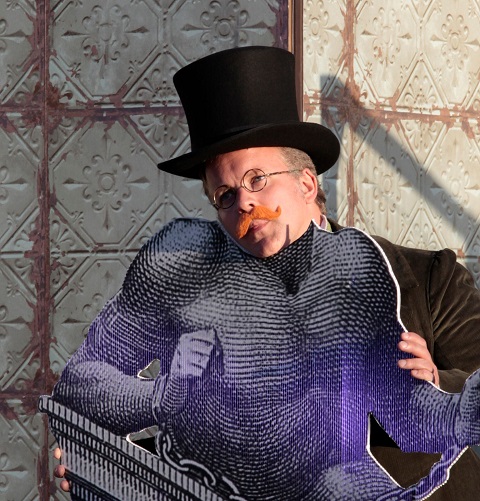 At Bampton, Alessandro Fisher’s ‘Casanova’ Count, had made a flamboyant
entrance, festooning the ladies of the audience with silver roses as he
extolled the gallery of girls whom he likes to goggle: ‘Here you see
sophistication; over there is calm and haughty. In another situation, there
is one who’s rude and naughty. One is serious, one mysterious; one is slim,
another grimmer.’ One cannot but admire Gray and French’s adeptness with
telling internal rhyme! SJSS thwarted attempts to make a similarly
ingratiating impact here, but Fisher’s performance was confident and
consummate: he deserved the applause which his arias kindled.

Matthew Sprange, as Blasio, had the measure of the role’s conversational
style and his baritone was focused, the phrases having excellent musical
and dramatic direction. Nathalie Chalkley was recovering from flu but this
only marginally impinged on her vivacious portrayal of Ernestina’s sassy
self-confidence and self-determination. At Bampton, I had found Rhiannon
Llewellyn’s intonation occasionally less than centred and I detected a
slight breathiness in the ascents; but, here she certainly assailed the top
Cs in both her arias with insouciance, though again I felt that she didn’t
always nail the true heart of a pitch. 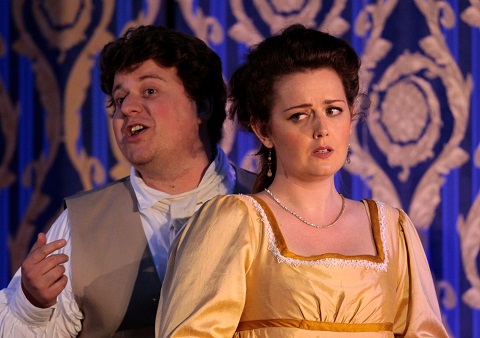 : here, again, he stood out as a singer-actor who is never switched off,
who is constantly seeking to interact with his fellow cast. The intimacy of
St Mary’s heightened such interactions with Kate Howden’s Carlotta, the
Countess’s maid, yet here the subtleties sometimes didn’t make the same
impact; but Howden’s lovely mezzo – full of character, feeling and insight
– suggests she is a singer to watch. Thomas Herford pronounced the
Lieutenant’s motto of feminine fidelity (anticipating CosÏ’s Don
Alfonso?) – ‘Chi vuol nella femmina/ Trovar fedelta,/ La lasci padrona/ Di
sua liberta. (He who wishes to find fidelity in a woman should allow her to
remain mistress of her liberty) – with elegance, as the libretto’s sole
words of dispassionate common sense were contradicted by cynical
counter-voice of the ‘cuckolding’ horns.

At Bampton in July, the Orchestra of Bampton Classical Opera were placed in
the South Transept and we were able to enjoy the players’ bright sound and
Salieri’s noteworthy musical detail. Although in some of the busier
ensembles there were a few anxious glances from the cast, seeking
confirmation, conductor Anthony Kraus ran a tight ship and the proximity of
the orchestral sound added to the zippiness of the performance. At SJSS,
with the players of CHROMA seated behind the set and the cast relying on
two monitors, the ‘pit’/stage coordination was no less consistent, but
there was an understandable sense of ‘playing it safe’: there was less
risk-taking in the vibrant act finales, and generally the tempos felt less
urgent, the dramatic propulsion less urgent.

The School of Jealousy
was the composer’s most oft-performed opera, winning international
popularity; when it reached London in 1786, the Musical Post and Daily Advertiser declared it ‘a masterly
composition, which does great honour to Salieri’. Thanks are due to Bampton
Classical Opera for allowing us to enjoy its charm.

The School of Jealousy