Hytner’s elegant production is a smooth slow-burner: everything unfolds
with subtlety and slickness – from the graceful sliding panel which
transforms an urbane interior to a sun-drenched exterior in the blink of an
eye, to Don Alfonso’s sly manoeuvrings, to the metamorphosis of two suave
Neapolitan aristocrats into dashing Albanian romancers. For once, gentle
charm outweighs mordant cynicism. Even the actors who serve as flunkies and
maids, deftly shifting and re-arranging props, are debonair. Indeed, the
comedy takes a while to get into its stride: this Don Alfonso seems almost
too disinterested in the young chaps’ seriously ardent avowals of their
beloveds’ constancy, and the girls themselves are almost bookishly demure
initially. But, it’s not long before the eye-brows are being cocked and wry
smiles are twitching, as the increasing contrast between the cool observers
and the over-heated participants creates a persuasive dramatic tension and
momentum.

Vicki Mortimer’s sets are simple but refined. The bar in which Don Alfonso
lays down the gauntlet to the over-confident Ferrando and Guglielmo, needs
just a few wall-mounted daily newspapers and a breakfast table to establish
a mood of leisured urbanity. The back wall recedes to reveal a terrace
bedecked with lemon trees and scented bouquets, and Dorabella and
Fiordiligi reclining on sun loungers, engrossed in novels, the unmarred
blue backdrop beautifully suggestive of limitless sea and sky beyond. The
arrival of the imploring, insistent ‘Albanians’ brings about a coloristic
transformation, a red, arching wedding canopy and splashes of orange and
gold evoking the headiness of the exotic which has won the women’s hearts
and which is enhanced by Paule Constable’s poetic lighting (revived by
Keith Benson).

The period costumes incorporate imaginative details: the lining and cuffs
of the gents’ frock coats offer a splash of red excitement, and Dorabella’s
crimson kitten heels peep out from beneath her elegant gown, a reminder of
her impetuousness which contrasts with Fiordiligi’s cooler ice-blue gown
and temperament. Just a neat moustache and goatee transform the men into
Albanian adventurers, a little stylish embroidery and stripy waist scarfs
being sufficient to suggest the ‘Other’; as we suspend our disbelief, the
transformation is all the more convincing for the lack of extravagance and
hyperbole. One can thus forgive a little hamming during the ‘mock-suicide’
antics. 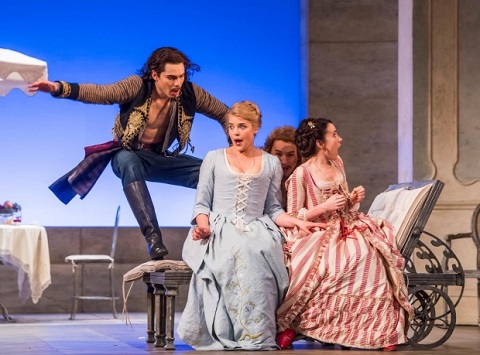 Hytner seems almost deliberately to eschew the potential opportunities for
high jinks and excess, and moderation makes the subtle ‘gags’ all the more
telling – as when Guglielmo, supposedly dying of arsenic poisoning,
snatches a slug of wine from the al fresco table when he thinks no one is
watching (of course, Alfonso is!); or when Dorabella exhibits an indecorous
interest in Guglielmo’s bare chest, exposed by the disguised Despina as she
administers the Doctor’s Mesmer magnet. 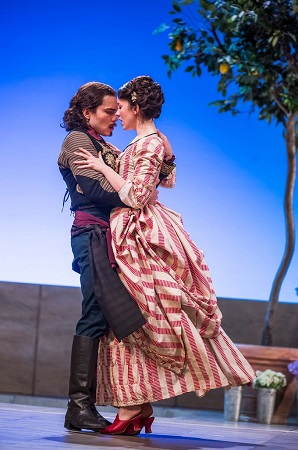 The young cast fit neatly into their roles. As Dorabella, Irish mezzo
Rachel Kelly glowed with a warmth expressive of the younger sister’s
impulsive, passionate nature. The full, rich tone of her Act 2 confession
of indiscretion, ‘» amore un ladroncello’ (Love is a little thief), was
winningly honest. Canadian soprano Kirsten MacKinnon’s Fiordiligi was well
characterised; we witnessed and believed in a credible, heartfelt crisis of
loyalty and love. MacKinnon scaled the heights of ‘Come scoglio’ cleanly –
although here and in ‘Per piet‡’ her chest voice was not
consistently steady or firm – and was a fearsome rebutter of Ferrando’s
advances. In the repeat of the first section, she focused her indignation
on her younger sister, instructing her in the need for steadfastness; the
prominence given to her pendant made its subsequent loss all the more
affecting.

Ukrainian tenor Bogdan Volkov, who won second prize at Pl·cido Domingo’s Operalia competition in 2016, was a sensitive Ferrando. His tone
was tender and the phrases beautifully shaped in ‘Un’aura amorosa’, and
this aria was an unanticipated moment of stillness, evoking sincerity of
sentiment, within the unfolding machinations. Volkov demonstrated plenty of
power, though, when provoked by Dorabella’s infidelity, though Russian
baritone Ilya Kutyukhin just nodded ahead in the charisma stakes, as a
flamboyant, high-spirited Guglielmo. 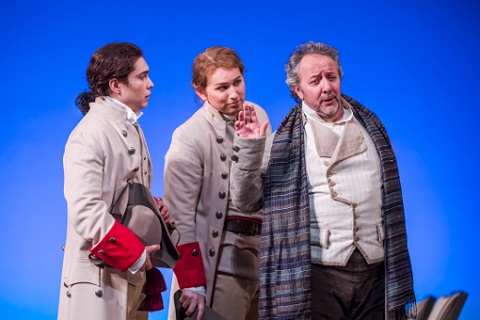 Watching over all with a cool impassiveness was JosÈ Fardilha’s nonplussed
Don Alfonso: he seemed unconcerned about the outcome of his wager; he’s
seen it all before. Though the Portuguese singer’s baritone was a little
husky at times, the recitative was absolutely fluent and as an
imperceptible but prevailing influence Fardilha swept the action forward
with an irresistible effortlessness.

I felt that Portuguese soprano Ana Quintans was a tad too hyper-active as
Despina, though her bright, clean soprano shone freshly. She needed a
little more direction in her two arias, for she had a tendency to lapse
into a ‘nudge-wink’ mode supplemented by lots of hand-flapping and funny
voices: the effect was out-of-kilter with the prevailing low-key eloquence.

The Marlowe Theatre can present acoustic challenges for musicians and
singers, and I’m not sure that on this first night of GTO’s brief residency
conductor Leo McFall had quite got its measure. The overture felt rather
tentative, the opening Andante somewhat laboured, the ‘motto’
figure heavily signposted. I haven’t sat in the Circle before, so can’t
judge whether the prominence of the woodwind and horns was an acoustical
quirk, but while the playing was notable for its refinement – and Mozart’s
woodwind contribute greatly to characterisation and dramatic orientation –
they frequently seemed too loud. Bassoon, flute and clarinet penetrated
forcefully in ‘Come scoglio’ and in ‘Donne mie, la fate a tanti’ (My
ladies, you do it to so many) the two horns were strong and true but rather
overpowered the gloating Guglielmo. Often there seemed an imbalance between
strings and wind. McFall also didn’t have a completely sure grip on the
larger ensembles and choruses, when stage and pit occasionally went adrift;
the conductor seemed to set quite rigid ensembles and didn’t so much as
adapt to his singers but dragged them back into the fold.

However, this was a very satisfying evening. At the end of Don Alfonso’s
‘demonstration’, the pupils in this ‘school for lovers’ had clearly learned
their lesson. For once, the re-coupling at the close did not unsettle or
give cause for doubt. The resolution was as serene as the azure sky, in
which not a single grey cloud hovered to cast a shadow of uncertainty.
Hytner’s production might lack a little piquancy at times, but sometimes
equipoise and peace are welcome.