An indignant sense of unjust usurpation was probably just as prevalent in
Hanoverian London – that is, among those Jacobites who sought to
re-establish a Stuart monarchy. But, despite the large map of Milan which
looms from the wall of the political headquarters in Jones’s production,
there is little sense of ‘specificity’ of geography or ideology. Instead,
we find ourselves in a mid-twentieth-century mobster-land – dimly lit,
ugly, bleak. Characters – a steadfast but resourceful wife; a conflicted
villain; a noble, self-knowing ‘deliverer’ – take precedence over locale or
period which, given the striking musical portraits created by Handel, is
fitting.

For Acts 1 and 2, Jeremy Herbert’s set divides the wide Coliseum stage in
two. Stage left is a dingy incarceration cell where Rodelina – whose
husband Bertarido, King of Milan, has been ousted from the throne by the
iniquitous Grimoaldo who nurtures amorous aims and claims upon his rival’s
wife – languishes in grief, with her son Flavio. The grimy prison houses an
array of surveillance cameras and telescreens worthy of an Orwellian
dystopia. In the panelled office of state, stage right, the supplanting
despots pour over the transmitted images of their captives with voyeuristic
slathering; when, that is, they are not eagerly destroying iconic images of
the rightful King and decorating the walls with their own visual
propaganda. The split stage is most powerfully deployed at the close of Act
2, when the reunited beloveds are forced to sing to each other, first
through a dividing wall, then separated by a central corridor, before the
rooms left and right slide torturously away from each other, cruelly
entrenching their severance. The emotional segregation of the characters is
further exacerbated in the final act, when horizontal partitions isolate
individuals with only their own emotional crises and inadequacies for
company. 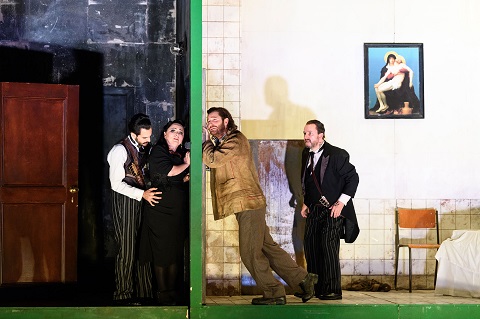 Rodelinda
has one of Handel’s least convoluted plots. Nicholas Haym’s libretto,
adapted from a text by Antonio Salvi, presents Rodelinda’s fidelity to her
‘dead’ husband (he has faked his own demise to both spy on his grieving
wife and surprise his usurpers), Grimoaldo’s inner conflict (he is torn
between genuine desire for Rodelinda and a lust for absolute power), and
Bertarido’s honour. There are a couple of ‘grotesques’: Eduige, Bertarido’s
sister, who is rejected by Grimoaldo, and the brutish thug Garibaldo who
makes overtures to Eduige in the hope of gaining the throne for himself. In
the end, ‘right’ triumphs over rapacity.

Jones (as revived by Donna Stirrup) and Herbert offer plentiful visual,
aural and choreographic details, with varying degrees of relevance and
effectiveness. Some will welcome and others lament the aural
verisimilitude: the door slamming, foot stamping, pained wailing that
punctures the exquisite music. The notion of fidelity which is at the heart
of the opera is represented visually by a recurring tattooing motif and
some blood-letting: one of the closing images of Act 3 is of a huge
forearm, tattooed in gilt with the name ‘Rodelina’, lying askew in the sand
beside a giant fist clutching a broken-off sword hilt: ‘Ozymandias’ meets Planet of the Apes.

Jones essays some humorous counterpoints to the prevailing tragic gloom,
but they don’t all hit the mark. During the overture, three turning
treadmills propel the characters into the dramatic maelstrom, but it’s not
so far from such cartoon capers to the farce of Keystone Kops. Indeed,
subsequently, when the loyal but ineffectual Unulfo (beautifully sung by
Christopher Lowrey), fleeing from his aggressors, spins and swirls along
and off the treadmill with the grace of a ballerina, one wonders if he’s
auditioning for English National Ballet. 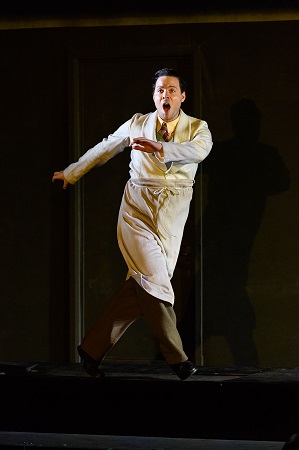 Sometimes, mockery undermines a strong dramatic point, as when Flavio’s
rabid gesticulations present a violent charade to Grimoaldo which swerves
our attention from the fact that, in daring the tyrant to kill her son – an
act which will confirm his dastardliness but which she believes him too
cowardly to fulfil – Rodelinda proves herself an equal Machiavellian.
Similarly, when she dances a tense tango with Grimoaldo and then taunts
him, ‘I loathe you’, the bathos prompted a (surely unintended) chuckle. By
Act 3, when Unulfo is accidentally wounded by the imprisoned Bertarido and
staggers through the final act – ‘Don’t worry, it won’t be fatal’ – the
comic drollery has the upper hand over potentially tragic conflict. One
wishes that Jones had had faith that Handel’s own penchant for irony would
be sufficient.

The cast are, fortunately, superb, many reprising their roles from the
first run. Rebecca Evans captures all of Rodelinda’s dolorous grief and
self-examination, untroubled by the heights from which so many of Handel’s
phrases start, then fall lamentingly. She imbues her soprano with freshness
and warmth to convey the depth of her love for Bertarido, and their Act 2
duet is a musical and emotional peak of the performance. 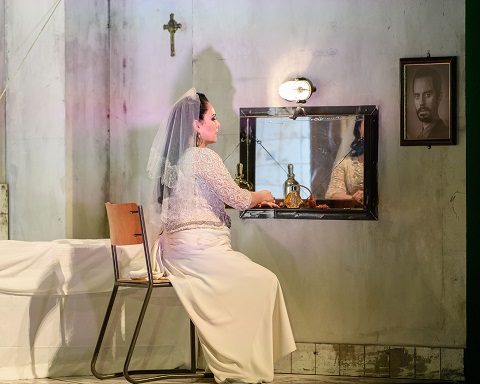 Tim Mead surprised me with the impact and strength of his performance as
the exiled King; his always expressive countertenor seems to have found new
fullness and depth, and he persuasively communicated Bertarido’s sincerity
and self-belief. Bertarido’s aria of despair when he believes that
Rodelinda has forsaken him was utterly compelling, sung beneath the
fluorescent illuminations of a cocktail bar – the motif was perhaps a nod
towards David Alden’s 2004/05 Munich/San Francisco 1930s film noir
infused production which presented a similar neon sign, ‘Bar’, at the start
of Act 2, above seedy backstreets. 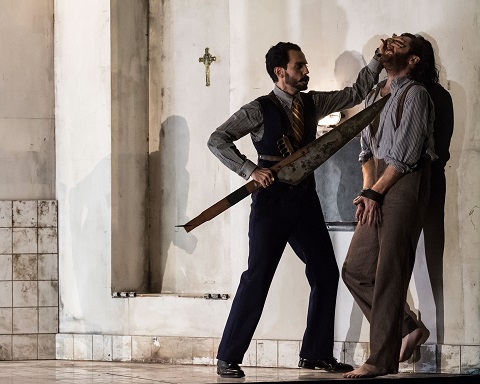 Juan Sancho was striking as Grimoaldo; though his tenor is quite light, he
made genuine the villain’s inner conflict – between his desire for power
and his desire for Rodelinda. The aria in which he reflects on his dilemma
– if he has Bertarido killed, he will retain his power but will lose all
hope of persuading Rodelinda to marry him; if he frees Bertarido, he will
lose both Rodelinda and, most probably, the throne – achieved the seemingly
impossible task of arousing some small sympathy for the rogue. Here,
though, one problem of Amanda Holden’s crisp translation was emphasised;
the English text is sometimes too sparse to convey the inferences of the
original Italian. In his self-doubt, Grimoaldo compares his complicated
torment to the simple life he imagines a shepherd to lead; the comparison,
and the lilting rhythms of the aria which suggest the peace offered by the
pastoral, are entirely authentic within an eighteenth-century context, but
the rather blunt translation raised an awkward laugh. 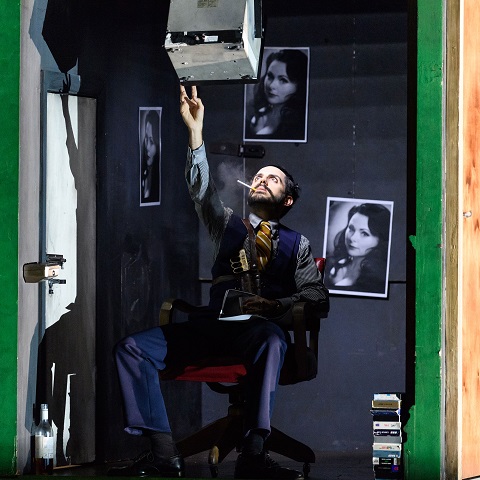 Susan Bickley’s Eduige was sparky and larger-than-life – a bit too Mrs
Slocombe (Are You Being Served) for my liking, but the
role was well sung. Neal Davies was a terrifically rough-edged Garibaldo
without ever sinking into pantomime mode. Actor Matt Casey is given a lot
to do, more than Handel probably intended, in the silent role of Flavio,
and almost suggested psychopathic tendencies equal to those of his captor. 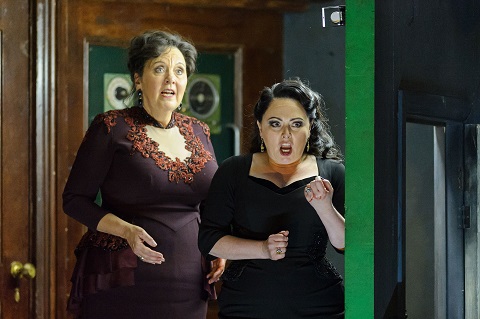 Conductor Christian Curnyn guided his instrumentalists through an elegant,
attentive reading of the score – there was some lovely, prominent woodwind
playing – but it felt at little sedate at times; Act 2, in particular,
needed more dramatic impetus.

Handel provides the expected lieto fine, as all sing in praise of
the sun which warms the land and brings peace and harmony; but Jones,
characteristically, has one final twist up his sleeve. Whether you like
this production may well depend on whether you delight in such pouting and
piquancy; but, if you enjoy superb Handelian singing then you should get
yourself along to the Coliseum before the run finishes on