The David Hockney Turandot, with the John Adams / Peter Sellers Girls of the Golden West, the Vincent Boussard Manon and the Prague/Karlsruhe/SF shared Elektra were all fascinating in their mises en scËne. Only La traviata of the five operas of the 2017 fall season (some of us remember when there were thirteen) suffered an outdated production, though it too had its merits — the three excellent principal singers and the masterful conducting of Nicola Luisotti.
In September the refurbished David Hockney 1992 Turandot burst once again onto the War Memorial Opera House stage in new intense colors for Puccini’s musically imagined Peking, the princess Turandot enacted in highest verismo terms by Austrian soprano Martina Serafin and the pit energized by the subtleties of Puccini’s score, conductor Luisotti having matured over his ten San Francisco years to join the ranks of the great conductors of Italian opera. 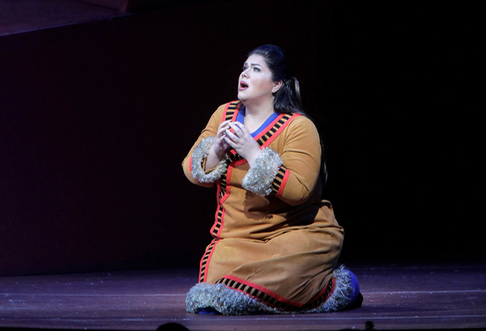 Leah Crocetto as Liu
The Turandot casting evolved in three significant ways for the six November performances. The icy Princess was now sung in highest heroic terms by Swedish dramatic soprano Nina Stemme, the slave girl Liu was sung by former Adler Fellow Leah Crocetto who has achieved a now deserved diva status, and Calaf’s father Timur was sung fully and forcefully by American bass Soloman Howard, grounding this role dramatically into the Liu tragedy of Calaf’s ascension into the realm of high love.
Nina Stemme, the world’s reigning dramatic soprano, took us into the heady stratospheres of the soprano voice and kept us there beyond what we know can be humanly possible. The three riddles were hurled in intense colors and vocal luster, her defeat felt in surprisingly human terms, this superb artist like almost no other is able to be both human and super-human. The ascension to love in the Alfano finale took the human love she had discovered into the rarefied spheres of Romanticism’s spiritual union, this impossible Teutonic ideal rendered possible, finally, in the Puccini oeuvre where before it had never found, or even sought.
Leah Crocetto in her Adler days was perhaps prematurely cast as Liu in the 2011 SFO Turandot. Just now la Corcetto projected the musical and histrionic attributes of a fully arrived, mature artist. Gratefully she is willing to take risks, like her first act “Signore, ascolta!” sung pianissimo, knowing dramatically that it is a silent prayer. It was stunning even with this estimable artist rested on the lower edges of pitch tones. There were not issues at all with her third act “Tu che di gel sei cinta,” delivered with compassion and fervor. La Crocetto brought great dignity to Liu’s tragedy in studied, convincing and satisfying verismo terms.
If conductor Christopher Franklin fully supported these two remarkable artists in their vocal and dramatic subtleties he took the balance of the score to its most blatant terms, knocking out the intimacy of the Ping, Pang, Pong interplay in rhythmic force, and resorting to the latent bombast of both Puccini and Alfano whenever possible. Obvious effect was certainly achieved, a thoughtful realization of the musical and dramatic magic of the Puccini score was sacrificed.
The June revival of the San Francisco Opera’s 2011 Der Ring des Nibelungen will tell more about a perceived new sophistication of casting perspectives at San Francisco Opera. The casting of Evelyn Herlitzius as Br¸nnhilde is a great start.
Michael Milenski