series – a project which is as bold and inventive as Haydn’s oratorio –
¡d·m Fischer led the Orchestra and Choir of the Age of Enlightenment, and a
trio of young soloists, in a performance which proved that one doesn’t need
a whole host, of angels or mortals, to celebrate the wonder and joy of
God’s monumental achievement in creating the world.

This was the first time The Creation had been performed in
Kings Place’s Hall One, and the small but varied instrumental forces –
three flutes nestled beside the fiddles, a rich-red harpsichord
dominating the centre, a splendid baroque contra-bassoon which seemed
to be stretching upwards to the heavens – and sixteen-strong choir made
for an impressive sight, tightly packed on the stage and in the gallery
above.
The ?rst public performance of the oratorio took place on 19th
March 1799 and involved a complement of 180 performers, in imitation of the
large-scale performances of Handel’s oratorios that Haydn had admired
during his visits to London in early 1790s. But, Fischer – who in 1987
co-founded the Haydn Festival in Eisenstadt – and his
musicians turned the smaller dimensions of the venue and their own forces
into a virtue. This was an intensely dramatic performance in which
carefully delineated, strongly articulated musical details, vibrant colours
and a vigorous dynamism created enormous energy, excitement and elation.

Moreover, with the choir aloft framed by trombones to the right and timpani
and trumpets to the left, seated in the balcony I frequently felt totally
immersed in the vibrant sound that Fischer conjured. There was mystery and
delicacy, no more so that in the opening representation of Chaos, but there
was also robustness and realism. Fischer seemed to delight in the
challenging piquancy of those initial dissonances, while the resolving
pronouncement, ‘Let there be Light’, was a glorious wall of blazing sound
which seemed to possess veritable physical mass and tangible brightness.

The OAE instrumentalists produced grandeur when required, but played with
responsiveness and suppleness. There were moments of sublimity – the grace
and profundity of the lower strings’ depiction of the ‘great whales’ – and
pastoral grace, as the lyrical exchanges between the flute and clarinet
charmed the cattle in the meadows and fields. 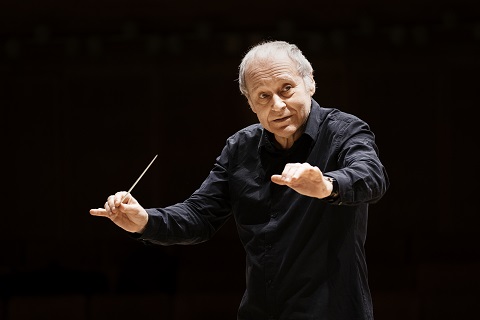 Fischer himself was a bundle of boundless, fizzing energy. Performing from
memory, he frequently turned to his right to engage with his trio of
archangels and enjoy their performances – I don’t think I’ve seen a
conductor smile so much during a performance – while a flick of arm, wrist
or hand, a raised shoulder or a twitch of baton communicated every musical
nuance to his instrumentalists. He generated enormous excitement and a
happiness which was powerfully embodied by the taut, disciplined vibrant
heavenly chorus raising its voice in praise to tell of the glory of God
when ‘Achieved is the glorious work’. Fischer’s arms circled, whipped up a
storm or opened widely as if to embrace the entire ensemble; and, if his
feet sometimes lost contact with the podium, they did so with a dancer’s
surefootedness. When, the trumpets and timpani broke the pianissimo awe of the Fourth Day’s gradual dawn, Fischer’s
pummelled his hands as if he could not contain his exhilaration at the
timpanist’s heralding of the sun’s appearance over the horizon!

This season saw the OAE launch their

Rising Stars of the Enlightenment

initiative, selecting eight singers who will perform with the orchestra and
musicians such as Sir Andr·s Schiff and William Christie, and receive
coaching and tutoring. Our archangels on this occasion were,
aptly, three of these first ‘rising stars’ and all gave strong, direct
performances.

Bass-baritone Dingle Yandell displayed a good sense of drama in Raphael’s
opening recitative, as he coloured the text to emphasise the ‘darkness’
which was ‘upon the face of the deep’ in this world without form and void.
Yandell’s intonation took a little while to find a true centre, but he proved
a clear and fluent story-teller, and has his voice, without undue effort,
remains firm and warm at the bottom. Though a little score-bound in Parts 1
and 2, as Adam, in partnership with Charlotte Beament’s Eve, his voice
relaxed and warmed in the final Part.

Beament’s soprano was strong and sure, beautifully even across the
registers, and silky of tone. She climbed brightly in ‘On mighty pens
uplifted soars the eagle aloft’, her account of avian invention illustrated
by characterful playing by the OAE’s woodwind section. Tenor James Way made
much of the text, using a tight, but not excessive, vibrato to inject the
words with vitality and his voice with valour.

This was an ‘operatic’ performance, with the recitatives, arias and
choruses unfolding in an unbroken sequence creating a dramatic continuity
into which we were persuasively drawn (perhaps it was a pity to break such
momentum by the placement of the short Part 3 after an interval?). It was
surely an evening – characterised by pace, punch and panache – as exciting
as that upon which the first audiences heard Haydn’s oratorio in
1799: an evening of creativity unwrapped and unbound.