Wilde had also plunged the depths six years earlier, in his play SalomÈ, originally written in French (to both evade the
censors and acknowledge the influence of Flaubert), in which he transferred
subversion from page to stage – peeling back the skin of Beauty to reveal
lurid degradation and moral decay, even while his text aspired to ‘the
decorative conditions that each art requires for its perfection’ (‘The
Critic as Artist’).

Though Wilde professed, in De Profundis, that he did not ‘regret
for a single moment having lived for pleasure’, he did recognise that
alongside an image of ‘Pleasure that liveth for a moment’ one has to make
the image of the ‘Sorrow that abideth for ever’, explaining that this was
‘one of the refrains whose recurring motifs make SalomÈ
so like a piece of music and bind it together as a ballad’.

might similarly be considered an essay in the aesthetics of transgression.
Indeed, David McVicar’s ROH staging revived here, for the third time
(revival director, B·rbata Lluch), certainly lures us to some dark places.
The ‘decorative’ is all too obviously sullied. Es Devlin’s art deco
staircase may curve gracefully but it carries Herod and his court from
the banqueting room – the split-level set affords just a glimpse of lavish
luxury – to the basement, where stained ceramics, ugly latrines and languid
naked bodies, all bathed in a green-tinged patina, reek of moral
bankruptcy. We’ve slipped down a staircase from ‘civilisation’ and
‘culture’ to chaos.

One thing that struck me about this production, which I didn’t remark last
time round, is just how ‘still’ this subterranean dystopia is. Soldiers,
Jews, Nazarenes, elegantly pose, the mix of fascination and revulsion with
which they evidently regard Salome’s increasing mania and vulgarity
mimicking our own voyeuristic bewitchment and absorption. Even Herod and
Herodias remain seated through Salome’s degenerate display. With Jokanaan
constrained by chains and cell walls, the only figure who emanates a life
force is Salome herself. A what a terrible force that is, one which, as it
escalates, devours itself – until the cathartic release of Salome’s
execution, when Naaman (Duncan Meadows) brutally snaps her neck at Herod’s
hysterical command, “Kill that woman!” And, so, with Salome’s death, we
have relief but also despair: those that remain are the living dead. 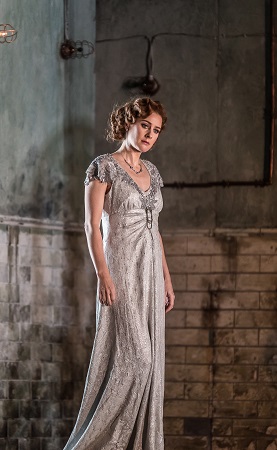 In the title role, Malin Bystrˆm conveyed not only Salome’s appalling moral
degeneracy and self-consuming, obsessive desire, but also the grace and
beauty which have so entranced Narraboth and Herod. Though pale, in a silver
satin gown, she alone gleams in this underground abyss. Bystrˆm moves with
physical eloquence: a litheness that somehow conveys both child-like
unselfconsciousness and burgeoning sexual awareness. Even after her sudden
recognition of her sensual and sexual self, this Salome remains a ‘child’
in her utter obliviousness of the moral consequences, to others and
herself, of her actions and commands. When she holds the prophet’s head
aloft and entreats, ‘Why don’t you look at me, Jokanaan?’, we feel anger,
frustration, despair and pity: she is utterly lost in her delusion. Bystrˆm
does not have a weighty dramatic voice, though it is rich and luxurious in
the middle, and she paced this performance sensibly. Perhaps in subsequent
performances in the run, she might give even more during her confrontations
with Jokanaan and Herod. And, if she does lack the power at the top that
would capture the irresistible hypnotical assault of sensual indulgence
then the relative lightness of her lyric soprano did initially lessen
Salome’s vulgarity. She held nothing back in the terrifying final scene
though, vocally or dramatically, as her fatal obsession consumed and
destroyed her. 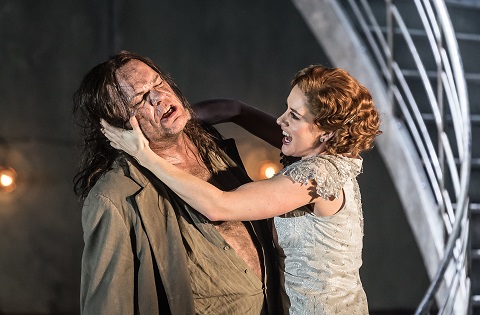 I still don’t understand the ‘message’ that McVicar’s ‘Seven Veils’ dance
is supposed to communicate. As Herod followed Salome through a series of
doorways and a video backdrop displayed a naked back, an exploding
lightbulb and other seemingly disconnected images, I assumed as before that
there was some Freudian intent. But, surely the stripping of the seven
veils symbolises the shedding of appearances and illusions – Wilde’s
‘decorations’ or poetic ornamentation? That, in dancing Salome reveals for
Herod the ‘self’ that she wants Jokanaan – who does not desire to know who
she is, will not look at or listen to her – to be forced to acknowledge. 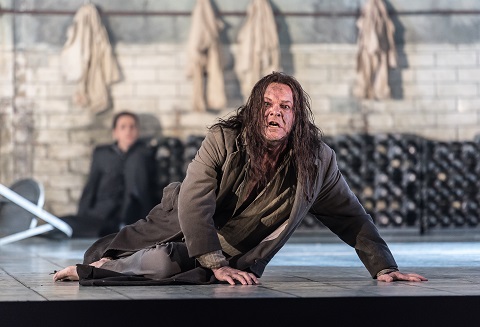 Tenor Michael Volle has a colossal voice and presence, both of which convey
a sensuality of which the prophet is himself aware. This Jokanaan imposed
his righteousness formidably and fearsomely, but we are aware of his
fragilities too. His religious proclamations rang resonantly from his cell,
almost as if he offered them as resistance to the desire which Salome had
incited.

John Daszak successfully captured the conflicted king’s depravity and
dismay, though he didn’t quite sail through the higher lying lines. The
full-voiced Michaela Schuster was terrific as Herodias: singing with
strength and smoothness, the queen was vulgar but not to excess, her horror
at her daughter’s demise skilfully nuanced. 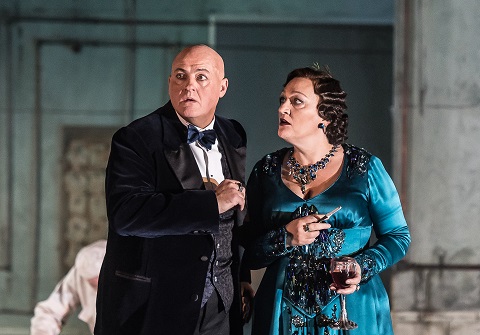 I confess that though they were sung with uniform competence, the minor
roles did not make much of an impression. Partly this is a consequence of
the lack of movement that I mentioned above. Even David Philip Butt, whom I
greatly admired in Glyndebourne’s recent touring production of Hamlet,
seemed uncharacteristically muted.

In the pit, Henrik N·n·si prioritised lucidity over luxuriousness,
initially at least. There was some wonderfully pristine delineation of
Strauss’s coloristic poeticism, but it was not until the final thirty
minutes or so that the score began to complement, or even drive, the
surfeit of sensuality and sickness that erupts on stage. However, McVicar’s
production again proved its power to stir up an odour of moral squalor and
dissipation that lingers pungently and ineradicably.