During the current season (2016-17) he has sung, for example, Hoffmann at the Bastille Opera (Paris), Alfredo in Seattle, Manrico in Rome, Don José in Naples, and Edgardo in Beijing. He is also featured in several DVDs, singing Macduff and (again) Hoffmann in Paris, and Cavaradossi at the Festival Puccini (Torre del Lago).

Here he performs fifteen of the world’s most beloved tenor arias—most of them Italian—with solid tone, perfect intonation, and very clear diction. Though his family name means “dry,” the singing has lots of juice, under splendid control. In short, Secco provides just what one wants from an Edgardo (in Lucia di Lammermoor) or a Rodolfo (in La Bohème). The disc is entitled Crescendo, and Secco has indeed mastered the art of making individual notes get louder but he can also make them grow softer and more tender. There is much to admire and enjoy here.

Almost inevitably, a certain sameness occurs when someone sings highlights from fourteen different operas one after the other. I say fourteen operas, not fifteen, because we get, from Il trovatore, “Ah sì, ben mio” and, in the next track, “Di quella pira,” both of them marvelously sung. (Alas, we don’t get to hear the wonderful tempo di mezzo that, in the opera, connects the first of these numbers to the second—indeed motivates it dramatically and prepares it musically. I suppose the section was omitted because it would have required hiring a major soprano.)

One small complaint: the traditional high C at the end of “Di quella pira” seems a bit effortful, just when one wants to feel that Manrico is at his most confident and determined. One can get a sense of his strain in a live performance of Il trovatore from Covent Garden. (Unfortunately the recording quality on that YouTube excerpt is dim, and Secco seems to be turning repeatedly toward and away from the microphone.) I wonder if Secco could help tenors around the world by devising some alternative way for a singer to end this aria or maybe even by boldly singing the actual written note: G, a fourth lower than the unwritten C! Still, that spirited cabaletta, as a whole, ends the CD with a bang. It helps that the men of the Kaunas State Choir suddenly join in, assisting Manrico in his heroic quest.

Secco has wisely chosen to include three French selections, which add some variety. They are the single best-known tenor moments from Carmen, La juive, and Faust. He pronounces the French texts well, something that is not always the case with non-native singers in French roles. 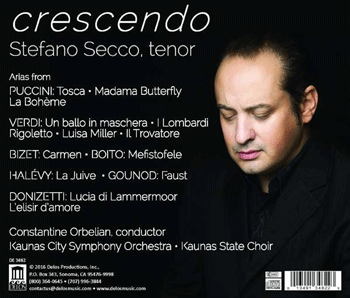 The conductor, Constantine Orbelian, is an American, born in California to immigrant parents from Russia and Armenia. He has conducted some thirty recordings on the Delos label, including an absolutely captivating disc of Handel arias with Polish contralto Ewa Podle?. He also performs widely as a piano soloist and accompanist. In 1991 he was appointed conductor of the famed Moscow Chamber Orchestra, becoming the first American to be director of a Russian musical ensemble. He is now the principal conductor of the orchestra heard here: the Kaunas City Symphony. I first read the name as Kansas City, but then quickly learned that Kaunas is the second-largest city in Lithuania.

The orchestra sounds fine throughout the disc, sometimes a little small (like many an opera-house orchestra) but very responsive to the push and pull of the tenor’s phrasing. The orchestra plays in what I would describe as today’s standard international style. The clarinet solo that opens “E lucevan le stelle” is beautifully turned, and vibrato-free, with nothing about it to reveal the Eastern European identity of the performer (Andrius Bernotaitis). The balance between singer and orchestra feels just right: I never had to strain to hear an accompanimental figure but never was distracted away from the vocal outpouring.

Orbelian and his forces provide atmospheric and sensitive backups to what is one of the most enjoyable CDs of tenor singing that I have encountered in a while. Robert A. Moore, the noted critic at American Record Guide (Sept/Oct 2015), reviewed a complete recording—likewise on Delos—of Verdi’s Simon Boccanegra, in which tenor Secco is featured, along with Dmitri Hvorostovsky, Barbara Frittoli, and Ildar Abdrazakov. Moore admired the whole recording and called Secco “a commanding tenor with a gorgeous voice in the style of Bergonzi.” Moore also enjoyed Secco’s disc of songs (with piano)—most of them composed by Tosti—on Naxos (ARG, July/Aug 2011).

In short, this is a very welcome introduction to a tenor whom all lovers of excellent singing will be happy to get to know; and a convenient way to get some of the best-loved tenor arias in a single disc.

Texts and capable translations are included. Brief but helpful notes are by Lindsay Koob.

Ralph P. Locke is emeritus professor of musicology at the University of Rochester’s Eastman School of Music. Six of his articles have won the ASCAP-Deems Taylor Award for excellence in writing about music. His most recent two books are Musical Exoticism: Images and Reflections and Music and the Exotic from the Renaissance to Mozart (both Cambridge University Press). The first is now available in paperback, and the second soon will be (and is also available as an e-book).