Richard Wagner’s grandson Wieland is usually given credit for sowing the seeds of Regietheater “(director’s theater”) with his Bayreuth Parsifal of 1951.

Wieland’s experiment generated ferocious outrage from Wagner traditionalists. But when today we look at his designs and read reviews of his staging it all looks mercifully mild: an honest attempt at fulfilling grandpa’s dream of “total theater” (Gesamtkunstwerk) by implementing the pre-war scenic dreams of English visionary Gordon Craig.

But as the decades rolled on and fury turned first to respect and even reverence, younger directors drew a dangerous conclusion. An outraged audience became a touchstone of artistic seriousness. By the time Hans Neuenfels presented his audience a cleaning lady Aïda and mirrored the Frankfurt audience itself as jaded witnesses to the Triumphal March in 1981, the lesson had been learned: Skandal macht Karriere: outrage gets you attention—and jobs. By the turn of the century, when he forced his Salzburg Fiordiligi Karita Mattila to sing her big aria Come scoglio while wrangling two leather queens on leashes, critica response was downright indulgent: Oh ,those directors, what scamps they can be!

I am happy to report that no leather queens were harmed in Seattle Opera’s staging of the same opera: even happier to report that Jonathan Miller’s ageing production of Cosi fan tutte—first mounted at London’s Royal Opera more than three decades ago—is as fresh as daisy, lively as a puppy, and as to the point as a slap in the face.

Sir Jonathan’s enduring concept for Così, presented with equal success here just over 10 years ago ? The same which has guided his long list of constantly revived, consistently successful productions: Ignore surfaces; take emotions seriously, even the most superficial and silly; above all, take seriously what the composer and librettist are saying with every word and note. When this production fails to do so, when it plays just for laughs instead of truth of feeling—and it fails sadly often in the first act—you can feel the momentum slacken even as you laugh out loud.

Fortunately, there is one person on stage who never lets you off with just a laugh. Our Fiordiligi is Marina Costa-Jackson, who first stepped on the professional stage in 2015 in the traditional debut soprano role of Musetta. A year later she was “covering” the role for the Met; 2016 brought in quick succession Violetta, (Cologne), Micaëla (Paris), and Adalgisa (Dallas)—an incredibly steep ascent. 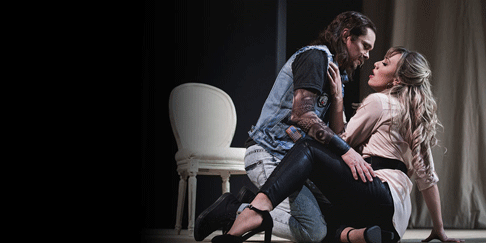 With the formidable Fiordiligi she takes on a role all but made for her vocally. The low As and high B flats that the composer put in to tease the freakish range of the lady who first essayed the role are not totally up to par, but they will become more secure with time. More important is that, three years out of the conservatory, Ms. Costa-Jackson captures Fiordiligi’s soul.

The name means “lily-flower”, and she convinces you the woman who bears it really longs for purity, chastity, fidelity. She’s not a tragic character: she’s too pampered, weak, human for that. But her discovery of her own frailty is enough to give the whole wind-up plot of Cosi a depth of feeling it wouid not otherwise have. She even succeeds in one of the risky gags that punctuate act one: a mid-aria false exit that rouses a hearty laugh only enriches her character more.

Her colleagues on stage all have far less onerous dramatic tasks to play, and acquit themselves with honor. Costa-Jackson’s sister Ginger is a delicious Dorabella, as quintessential and lovable an airhead as Alicia’s Silverstone’s immortally Clueless Cher. Kevin Burdett’s scheming Don Alfonso brings an agreeable whiff of brimstone to the role, reminiscent of the genial Ray Walston’s Mr. Applegate in the musical Damn Yankees. Finnish tenor Tuomas Katajala’s Ferrando is the perfect hangdog “hero’s friend,” while Guglielmo, the hero himself (in his own mind at least) is played to self-satisfied perfection by “bari-hunk” Craig Verm, who must find it relaxing for once to be allowed to remain fully-dressed for the entire length of a perfomance.

Laura Tatulescu plays Don Alfonso’s paid co-conspirator as an agreeably bitter little pill. I wish Harry Fehr and Cythia Savage (re-mounter and costume designer respectively) could have been a little more consistently contemporary about her costuming in the disguise scenes; they’re sadly old-fashioned-stagey and unfunny.

Did I mention all these people can sing? And, saints preserve us, act? Without their eyes constantly seeking the conductor’s baton like dogs waiting for a stick to be thrown? On the dangerous vast stage dictated by McCaw Hall’s layout, this is a near miracle of ensemble in itself.

But such miracles don’t happen without a master hand in the pit, and after a few disquieting moments during the overture Paul Daniels takes utter self-effacing charge of affairs, with wonderfully judged tempi and subtle moment-by-moment balance between orchestra and stage. To see, again and again, an auditorium full of heads nodding happily as they recognize the rueful truth of the unfolding tale, is to wish you could somehow say: “That’s right: trust your instincts: If it feels that good, it must be that good. Never mind “concepts”, contemporary, topical. timely or not. Only truth and artistry conjoined feel like this. Accept no substitutes.