Der Kreiderkreis or The Chalk Circle or Le Circle de Craie in French (1931) is the seventh of Zemlinsky’s eight operas (A Florentine Tragedy [1916] is the fifth, The Dwarf [1921] is the sixth, the unfinished Le Roi Candaule is the eighth). This Lyon production is the French premiere of The Chalk Circle.
Zemlinski’s The Chalk Circle is realized in masterful musical strokes, the late Romanticism and its destruction that surrounded Zemlinsky is fully assimilated into a finished style that floats faultlessly from the grotesque to the sublime, through cruelty and hopelessness to generosity and redemption. The.exotic tones of the ancient Orient and the new American world plus extended tracts in the actual spoken language finished the sophisticated soundscape of this tumultuous German political era. It was a unique music that mesmerized the opening night audience.
Director Richard Brunel found this sound world in ephemeral white images that merely suggested architecture. He dressed his actors in colors and periods that spoke to and of the wealth, power and corruption of the early twentieth century and to our current moment and to these early moments of the Chinese twenty-first century as well. He dissolved morality play abstractions into very specific and intense human scenes incorporating a large number of silent actors and even a live horse. The horse was white of course, and as the white snowflakes of the full stage snowstorm it too purified the heroine Haitang in her impossible plight. 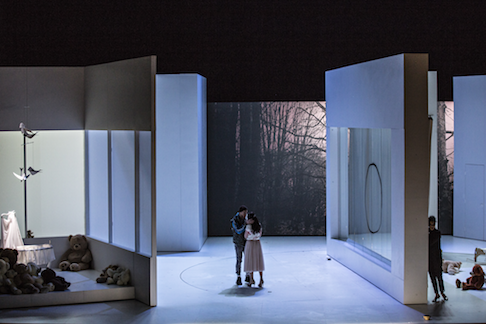 Ma’s number one wife Yu-Pei overhears Haitong’s reunion with her brother Ling and hatches her plot to frame Haitang for infidelity.
The story is simple. A maiden sold into sex slavery is saved first by a villain she then purifies by giving him an heir. Accused of killing this husband by his number one wife she is again saved, now by the emperor of China himself who discerns her purity when she refuses to inflict violence on her child by wrenching it from a circle drawn by chalk. Among the splendidly staged scenes was her initial house of joy encounter with the young noble who later became emperor. It made startling effect indeed as circles of white light moved and bounced in pleasure and innocence.
Director Brunel knows however that such purity and innocence is doomed. He is not duped by the happy morality of the Chinese play. Brunel’s heroine we learn in the split second before final blackout has only imagined this happy ending. This extended delirious love duet with the emperor was but a flash in the moments before she is executed by the forces of an unjust world.
It was a production of purely human dimension executed in exquisite theatrical taste.
The cast, primarily Germanic language singers, was perfection, physically and vocally finding the depths of purity and depravity in the humanity of the characters of this ancient morality play. Conductor Lothar Koenigs created a vibrant presence for Zemlinsky’s score. 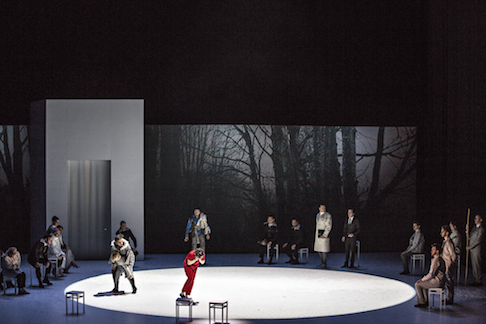