[For background on Ravel’s L’heure espagnole—the first of his two operas, each in a single act—and its previous recordings, see my review of the Stuttgart recording. ]

The results are much the same as in Stuttgart, except this time even better. The Concepción, Gaëlle Arquez, has a fuller voice than did Stéphanie d’Oustrac, yet is at least as alert to the quick shifts in the character’s moods and impulses. (The entire recording is available in segments on YouTube; here is the character’s one extended solo: “Oh! l’impitoyable aventure.”) I hope we get to hear Arquez in more recordings. (Here she is, acting and singing superbly, in the final moments of a live Carmen performance at Bregenz.) Mathias Vidal is a real heroic light tenor, if that phrase makes any sense. (I’d like to hear him sing Idomeneo!) His reading offers quite a contrast to the thinnish character-tenor sound produced on the Stuttgart recording—very effectively and skillfully, I admit—by Jean-Paul Fouchécourt. Alexandre Duhamel repeats his Ramiro, now conveying more of what the seemingly dim-witted mule-driver is experiencing. Julien Behr is a marvelous Gonsalve, singing with a bit more youthful flair and energy than the fine Yann Beuron. And Lionel Lhote, as Don Iñigo Gomez, points his lines more emphatically than Paul Gay did in the Stuttgart CD, yet without ever sacrificing vocal beauty. 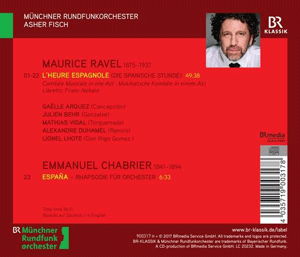 The clear yet resonant acoustics of the Prinzregententheater in Munich add to the pleasure. (On this wonderful smallish theater, see my review of Wagner’s Lohengrin here.)

I imagine that much of the extra detail, dramatic impulse, and seeming spontaneity in this recording comes from the conductor, Asher Fisch, who has conducted extensively at the Israeli Opera, Seattle Opera, La Scala, and the Vienna Volksoper.

In short, this is now my favorite recording of Ravel’s scrumptious and witty 50-minute work. Essay, plot summary (with helpful track indications), and info on the orchestra and conductor. But nothing on the singers and no libretto. Fortunately, the French text and good translations can be found online, if one hunts around.

The opera is followed by Chabrier’s España, an appropriate pendant and always welcome, especially when performed so spiffily. (Here’s the complete performance of the Chabrier.) The microphone placement, though, seems less felicitous than in the opera: quiet string passages are hard to hear, yet drum whacks are over-resonant.