The opera presents some quick-moving events in the lives of a clockmaker’s wife and the four wildly different men with whom she is variously involved (one being her husband). The CD is officially vol. 4 of a series covering Ravel’s “orchestral works,” a phrase that here clearly means “works with orchestra”. (The two piano concertos and Tzigane are presumably scheduled for some future volume.) The Stuttgart orchestra plays very capably throughout, but the star of the CD is mezzo-soprano Stéphanie d’Oustrac.

Opera lovers may remember d’Oustrac as the title character in the DVD of Lully’s Armide with William Christie and Les Arts Florissants. Her voice, as befits an experienced singer of early music, is firm and precise; her diction is wonderfully clear. True, it does not bloom as fully as that of some other singers who have recorded one or the other of these two pieces: for example, soprano Régine Crespin in her classic recording of Shéhérazade or Suzanne Danco in her two recordings of L’heure espagnole. A few of d’Oustrac’s loud high notes glare. But the compensations are numerous and gratifying. For example, in the first movement of the song cycle, d’Oustrac brings great variety to the list of foreign places and sights that the persona of the poem declares that s/he would love to visit (if only in the imagination). She brings tension and fear into the narration as the images move to include assassins and beheadings, yet without ever breaking the smoothness of the vocal line—quite an achievement!

The mezzo brings this same vocal mastery and keenness of characterization to the role of Concepción in L’heure espagnole. She differentiates wonderfully between moments when Concepción is addressing one of the other characters and when she is musing quietly to herself. She catches many glints of humor, not least in the frequent word-play. (One end-rhyme is as unlikely in English as in French: “biceps”/“concepts”.) D’Oustrac’s attention to the conversational nature of the words is further emphasized by her clear and natural-sounding pronunciation; the letter “r” is guttural, as one hears it in most of France, rather than rolled (or some say trilled) in an Italianate manner.

The four men sing extraordinarily well and—being, like d’Oustrac, native French-speakers—pronounce the sometimes rapid dialogue beautifully. Jean-Paul Fouchécourt, a renowned high tenor, limns the character of the clockmaker superbly. Yann Beuron and Paul Gay are careful to avoid caricature in roles that are patently ridiculous: as a result, their performances will hold up well to repeated hearings.

My one slight disappointment was with Alexandre Duhamel as Ramiro. This mule driver is supposed to sound tongue-tied and a bit naive, until he is alone and suddenly becomes (as the score prescribes) “dreamy” and even somewhat eloquent. Duhamel does sound quite sensitive in the latter passage, like a superb singer of art song. (Duhamel is indeed an experienced recitalist. The role of Ramiro, for high baritone, was originally sung by Jean Périer, Debussy’s first Pelléas.) But, up to that point, he is merely bland, as if not quite sure how to play a character who seems, to the other characters on stage, almost dim-witted. (Another fine recent recording of this same opera features Duhamel in the same role, and his reading is just that bit more specific.) Duhamel’s voice is not very different in sonority from that of Gay, the Don Iñigo, so a listener unfamiliar with the work may need to consult the libretto often. 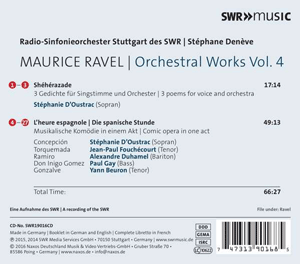 Denève and the orchestra follow the singers every step of the way, or sometimes (as required) anticipate and guide them. One can sense the players’ enjoyment of numerous passages, such as the galumphing figure that repeatedly accompanies, in interestingly varied ways, the heavy-footed Ramiro (as he lugs grandfather clocks upstairs and down) or the long trombone glissando that comments on the discomfort of overweight Don Iñigo, stuck inside a big clock.

The recording was made at two performances on successive nights, presumably done “in concert” (without costumes and sets). The audience is extremely quiet until the end, when they erupt in applause, cheers, laughter, lively conversation, and some cries of “Olé!”

With such an intricate and quickly moving score, there are bound to be passages that are done a little differently on other fine recordings. Critics have longed praised the recordings of L’heure espagnole conducted by Ansermet and Cluytens (both monophonic). Apparently the stereo recordings conducted by Maazel, Previn, Slatkin, and Armin Jordan all have some particularly admirable features, as does a 1960 mono recording conducted by Bruno Maderna. (Some of these recordings can be sampled, with pleasure and profit, on YouTube.) I can attest that the very first recording of all—conducted by Georges Truc in 1929—retains special charms. Not least, the properly pompous-sounding Don Iñigo in that historic recording is Hector Dufranne, who was the original Golaud in Debussy’s Pelléas et Mélisande, 27 years earlier! (The opera’s concluding Quintet, brimming with character, can be heard on YouTube. For contrast, here’s the same number in the recording under review—more refined in vocal production, and less broad in its comic inflections.) But this new recording can stand proudly next to any of the aforementioned. And it comes with, as a bonus, D’Oustrac’s captivating recording of Shéhérazade.

The booklet contains the texts, in French only, and an informative essay in German and in what is rather Germanic-sounding English. (Some long sentences should have been broken up.) The booklet misspells the name of the renowned mezzo-soprano Jeanne Hatto, who gave the first performance of Shéhérazade.

There have been two videorecordings of the opera from Glyndebourne. One was released on videotape in 1987 and is now on YouTube. The other, a 2012 performance on DVD, has been highly praised by critics and online purchasers. D’Oustrac and Gay perform the roles that they sing on the present CD (here they are in that same final Quintet: Gay, as Gomez, is the man in the business suit), and the DVD also includes Ravel’s other, and equally imaginative, short opera, L’enfant et les sortilèges.