‘Enjoy the music of the never-enough-praised Monteverdi, born to the world
so as to rule over the emotions of others … [which] will be sighed for in
future ages at least as far as they can be consoled by his most noble
compositions, which are set to last as long as they can resist the ravages
of time.’

Prophetic words. And, they were confirmed at the Camden Roundhouse where
the Royal Opera House and the Early Opera Company joined forces to present,
in a new English translation by Christopher Cowell, Monteverdi’s The Return of Ulysses.

It is music, as Monteverdi’s operatic dramas themselves argue and
illustrate, that speaks across generations and epochs. The words of
afore-mentioned author – ‘Monteverdi was born into the world to control the
feelings of others, there being no soul hard enough that he could not turn
and move it with his talent’, both singer and listener being ‘carried away
by the variety and strength of the same disruptive emotions’ – seem as
applicable now as in Monteverdi’s day. It seems to me, then, that there is
no need to find contextual or narrative parallels to emphasise or establish
the link between past and present. Homer’s poem communicates the grief of
absence and the joy of reunion, emotions with which all humanity can
empathise. 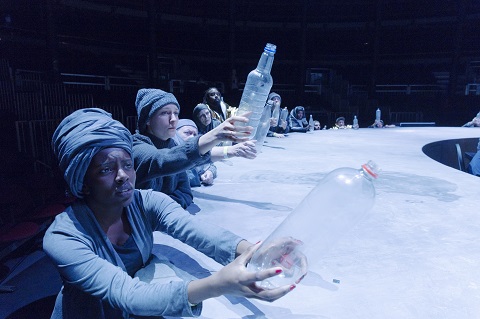 Director John Fulljames evidently thought differently. As well as excising
the gods and goddesses – and thereby eliminating some of the more effusive
lyrical moments in the score – he decided that ‘the question of living with
the legacy of war feels as if it’s the story of the 21st
century’, and that references to modern-day conflicts were in order: so,
the community choir became Syrian refugees receiving food parcels from the
aid-worker Penelope, and costumes juxtaposed buxom bronze breast-plates
with gold Doc Martens, and spangly space blankets with combat fatigues.
But, Ulysses is not ‘about’ refugees: the drama is impelled by a
‘home-coming’ which, in the opera’s final duet of reunited love confirms
the power of music itself. And, Fulljames neglect of this inexorable
progress towards inevitable resolution was problematic. 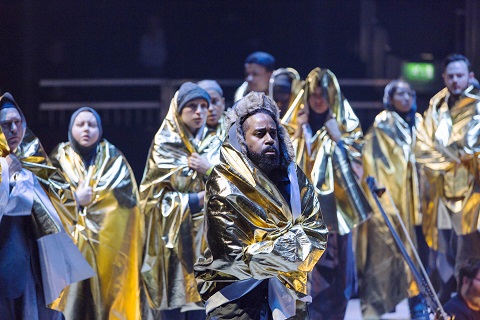 As Ellen Rosand points out, each of the (original) five acts ‘culminates
with an action that marks a successive step in Ulisse’s journey homeward:
Act I ends with his rejoicing at his arrival in Ithaca, Act II with his
reunion with Telemaco, Act III with his vow to slay the Suitors, Act IV
with his defeat of the Suitors, and Act V with his reunion with Penelope’.

But, in this production, while no-one, not even the instrumentalists, was
ever ‘still’, there was no sense of anyone actually going anywhere. 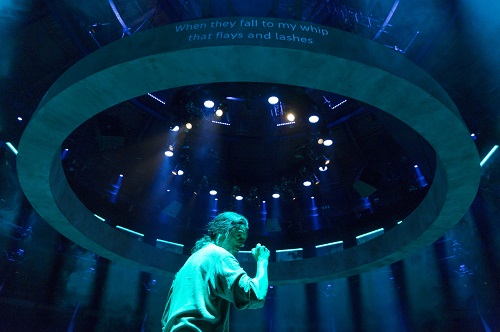 When the ROH so successfully staged Orfeo at the Roundhouse in

, Michael Boyd’s production was characterised by bold, dramatic movement,
exploiting the possibilities of the venue and capturing the vivacity of
Monteverdi’s strings of canzonetti and balletti through
the gestures of contemporary dance and show-ground acrobatics. Here, all
involved were confined to a central ring, which the singers circled as the
ring itself revolved, and into the ‘hole’ of which the Orchestra of the
Early Opera Company nestled, while they too rotated.

This incessant circling exacerbated the difficulty, posed by the dimensions
and nature of the venue, of creating sustained dramatic engagement between
the protagonists and consistent ‘connection’ between cast and audience. As
they orbited the musicians, in order to communicate with all ‘corners’ of
the Roundhouse singers frequently turned away from each other, disrupting
dramatic relationships. Moreover, the amplification that was so subtly and
effectively employed in Orfeo in 2015 was less successfully
managed here; voices seemed to ebb and flow, again making it difficult, for
this listener at least to concentrate, and to discern sustained dramatic
and emotional expression (though, the surtitles aloft – yet another ring –
were helpful).

The performance was not aided by the unfortunate indisposition of Christine
Rice. Rice mimed and mouthed the role of Penelope while Caitlin Hulcup –
who, we were informed, had learned the role in a single weekend – stood
among the instrumentalists in the doughnut-hole. Hulcup sang with
refinement and nuance; but, inevitably and unavoidably, the engagement
between the other characters and Penelope was lessened, as they sought to
encourage her to cast off her obduracy and anger.

Moreover, while the musicians of the Early Opera Group played for conductor
Christian Curnyn with customary stylistic elegance, the musical score was
unusually monotone of mood and detached from the dramatic unfolding. While
there is a stylistic gulf between the Mantuan Orfeo and the late
Venetian operas, Ulysses is still characteristically Monteverdian
in its juxtaposition of swiftly shifting emotions and affections, from
pathos to passion, despair to delight; but here rhythmic impetus and
variety often felt lacking. I barely registered the vivid sinfonia di guerra with its prickly concitato
incisiveness. The libretto bears the generic description ‘tragedia
’ but this attests more to the contemporary classicising aesthetic than to
a prevailing gloom, and I missed the alleviating heightening of lyricism
that occurs in Ulysses’ own vocal expansions, or the dramatic tension which
tightens the screw during the testing of the suitors, or the lascivious fun
and flippancy of the exchanges between Melantho and Eurymachus. 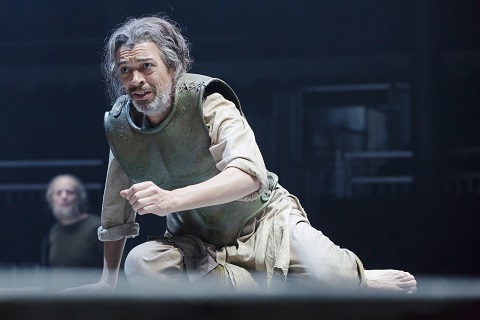 Pushing such misgivings aside, though, there is no doubting the eloquence,
both vocal and expressive, of Roderick Williams’ account of Ulysses’
trials. Williams sang beautifully: the gentleness of his baritone and the
sensitivity of his phrasing and dynamics seem custom-made for Monteverdi’s
tender, affecting arioso. But, while it was not entirely Williams’ fault,
given that he seemed to have been encouraged to sing much of the role while
lying on the floor, one might have found the characterisation rather
monochrome: this was a Ulysses in torment, but where was the joy and
laughter of ‘Rido, ne so perche’, the bristling bravery of the battle cries
or the passionate consummation of the final love duet? 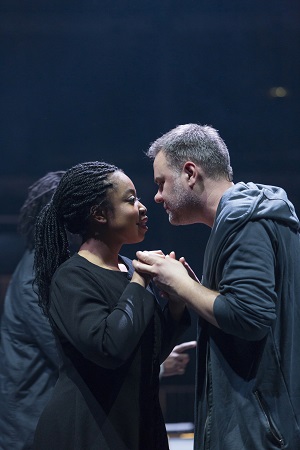 The ROH has assembled a strong cast and they without exception impressed.
Jette Parker Young Artist Francesca Chiejina was a vibrant, vocally lithe
Melantho – how did Penelope resist her servant’s seductive exhortations to
love? – and she was joined by Andrew Tortise’s Eurymachus in a beguiling
love duet (which is long, but in this context felt all too brief). Mark
Milhofer enjoyed the swineherd Eumete’s lyrical invocation to Nature, and
Susan Bickley provided concentrated emotional focus in the minor role of
Eurycleia. Catherine Carby, bashed about in brazen boots, and was a bubbly,
plump-voiced Minerva. As the suitors, Nick Pritchard (Amphinomus), Tai Oney
(Peisander) and David Shipley (Antinous) were vocally faultless but
struggled to make a dramatic impact.

Stuart Jackson was dressed in an ugly fat-suit and bald pate, but his Iro
was, ironically, handsomely mellifluous: indeed, one might question whether
Jackson’s characteristic vocal elegance and beauty were quite the right
channel for a character who lacks all pastoral grace as he repeats and
spits musical and verbal motifs? Jackson’s trills were crisp and stylish,
but did not conjure a demonic laughter that is a sign of imminent lunacy
and eventual, shocking, suicide. There is more depth and range of emotions
to this ‘comic’ role than Jackson perhaps intimated, however beautifully he
sang.

It was a pity that so much splendid singing was rather let down by a
production which span on the spot and lost its way. Monteverdi’s drama is
driven by the ever-decreasing distance between its two protagonists, but in
this production the distances between characters seemed to grow not
diminish. By the close, like Ulysses lost on the high seas for ten years,
they all seemed rather adrift.

Claudio Monteverdi: The Return of Ulysses

See Anthony Pryer’s ‘Approaching Monteverdi: his cultures and
ours’, in The Cambridge Companion to Monteverdi. The
author/librettist has recently been identified as Michelangelo
Torcigliani, friend of the librettist of Il ritorno d’Ulisse in patria, Giacomo Badoaro.