Despite the youthfulness of the participants, there was no sense that this
was anything but a ‘professional’ performance. The LSSO are not only
talented individuals, they are an undoubtedly disciplined ensemble,
attentive to the sort of musical detail that ensures high artistic
standards and the sort of concert etiquette that ensures that the orchestra
communicate directly and engagingly with their audience.

This was a thoughtfully constructed programme, paying homage to two
‘anniversaries’ – the hundredth ‘birthdays’ of both Leonard Bernstein and
Gustav Holst’s The Planets – and combining a centrepiece of the
classical repertoire with less well-known fare.

last summer I noted that the text and score seek not only to resurrect
synaesthesic images of long warm Southern evenings, but also to present a
progression from the innocent solipsism of childhood towards mature
knowledge and integration. While Fleming’s sumptuous soprano and glamorous
demeanour highlighted the moments of rapture and transcendence, Louise
Alder, the soloist on this occasion, was in a sense more ‘grounded’: in
place of Fleming’s redolent, dusky nostalgia, we had clear-eyed
wonder and innocence. Fleming encouraged us to look back to the past; Alder
transported us back to yesteryear.

The easy sway of Alder’s narrative opening was utterly enchanting, as she
described the time that ‘people sit on their porches, rocking gently and
talking gently and watching the street’. The unstressed fluency of the
prose text was absolutely matched by Alder’s vocal relaxation. The tone was
light and bright; the focus pinpoint; the delivery unfussy. One could hear
the Straussian silver of Alder’s soprano being used to intelligent and
emotive effect (

). Armstrong took things at a fairly swift pace, which enhanced the genuine
story-telling ambience, as ideas, articulating memory, tumbled forth.

This was a beguiling ambulatory narrative through time and place, though
the text was not always clearly enunciated: surely more should be made of
the frequent use of alliteration and word repetition, a lyrical prose idiom
which entranced Bernstein. That said, Alder could be forgiven for
prioritising clean definition of melodic line over consonants, especially
given the soaring beauty of her vocal arcs. With the magical pronouncement,
‘Now is the night one dew’, she immersed us in crystalline splendour.

In interview in 1981, Leontyne Price (who had recorded Knoxville
in 1969) remarked that, ‘You can hear the streetcar, the horns, and
everything; you can smell the strawberries’, and the reduced forces of the
LSSO created ambient intensity: the woodwind confidently articulated their
solos and violinist Samuel Woof McColl showed strong leadership when negotiating
the transition from evocative childhood reminiscence of sensory
impressions, to the jangling intrusions of ‘A streetcar raising its iron
moan: stopping, belling and starting’.

After moments of vocal intensity – ‘On the rough wet grass of the back yard
… We all lie there’, Armstrong continued to push forward rather than allow
the music to wallow in recollection; there was a feeling of pressing sentiment
rather than indulgent emotiveness, and in the final phrases Alder floated
free, her voice timeless, aloft, perfectly capturing Bernstein’s own
response to the text’s evocation of hinterlands: ‘the summer evening he
describes in his native southern town reminded me somuch of similar
evenings when I was a child at home … You see, it expresses a child’s
feeling of loneliness, wonder, and lack of identity in that marginal world
between twilight and sleep.’ 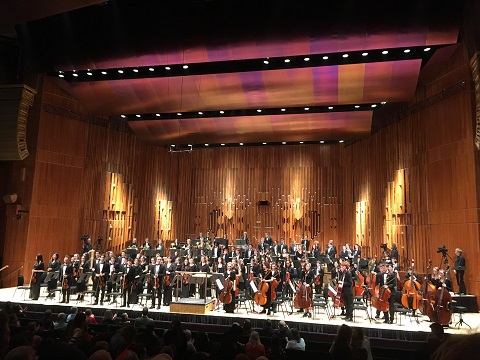 Before such enchantment came effervescence, in the form of the overture to
Bernstein’s Candide. There was plenty of flair and collective brio
here: rhythms were tight and the intonation was impressively precise –
those first fiddle parts are hard! Articulation and bowing were uniform and
idiomatic, and while it took a little while for a balance between the
expanded forces to be struck, this was understandable, and Armstrong was a
cool, collected guide. Percussion, timpani and woodwind relished their
moments of drama – those piccolo cries rang in one’s ears! But, the LSSO
seemed less secure in more lyrical passages: the lower strings’ rendition
of ‘Oh Happy We!’, Candide and Cunegonde’s idealistic paean, felt
underpowered and unfocused.

If the LSSO musicians seemed a little nervous at the start of the evening,
then after the interval they were more relaxed and there were more smiles
warming the Hall stage. And, while the more numinous and luminous qualities
of Holst’s The Planets proved harder to attain, there was such
rhythmic punch in ‘Mars’, such darting diversion in ‘Mercury’ and such
unalloyed joy in ‘Jupiter’ that – as one percussionist festooned his
shimmering tambourine above his head and the timpanists vied with each
other for feistiness – who would not celebrate such youthful talent and
musical energy.