The male lead characters Zurga and Nadir are sung by Mariusz Kwiecie? and Matthew Polenzani. LeÔla, the woman whom both men have sworn to forget, is Marina Rebeka. Nourabad, the high priest of Brahma, is sung by Andrea Silvestrelli. The Lyric Opera Orchestra is led by its music director, Sir Andrew Davis; the Lyric Opera Chorus is prepared by its chorus master, Michael Black. This production originated at San Diego Opera with sets and costumes by Zandra Rhodes, lighting by Ron Vodicka, and choreography by John Malashock and Michael Mizerany. Ms. Rhodes and Messrs. Malashock and Mizerany make their debuts at Lyric Opera of Chicago with these performances of The Pearl Fishers.
Before the start of the opera, a scrim covering the stage depicts graphically the fishers of pearls positioned on stilts and rendered in pastel shades suggesting a temperate climate. During the overture, marked by sensuous playing of strings and woodwinds, the scrim has raised allowing supernumeraries to indicate diving motions in the undulating band of simulated waters. The male chorus representing pearl fishers sings of their activities while dancers carry out spirited movements positioned in front of wildly colorful trees. All are interrupted by Zurga’s reminder of the current necessity to choose a leader with Mr. Kwiecie?’s especially resonant description on “qui nous protËge” (“one who will protect us”). Scarcely has Zurga accepted their acclamation as leader when Nadir returns from the wild. Mr. Polenzani initiates his reconciliation to Zurga and the others with excited pitches describing his encounters in the forest. Once the desire to remain is understood, Kwiecie? urges Nadir with an optimistic rising intonation at “saluons le soleil” (“let us greet the sun”). Only when the chorus of fishermen retreats to leave the protagonists alone together can they recall frankly their previous discord. Both men offer to set aside rival emotions directed toward the same woman when Kwiecie? declares “Mon coeur a banni sa folie.” (“My heart has banished its madness”) with a deep emotional pitch on the final word. Polenzani’s response introduces excellent, sustained legato phrasing when describing the final shared journey “aux portes de Candi” (“up to the gates of Candi”). Despite their reconciliation, these memories stir up past emotions, ultimately laying the foundation of the opera’s central conflict. Neither man has erased his attraction to the woman who is designated as “la dÈesse” in their subsequent lyrical display. This well-known duet, immediately following the scene and pledge of friendship, begins here softly as an evocation of individual, then shared memories. The sensory recollections for Kwiecie?, “Je crois la voir encore” (“I can still see her”), and for Polenzani, “La foule … murmure tout bas” (“the crowd murmurs under its breath”), are declaimed with moving sensitivity. For both singers during the beautifully shaped duet a clear tension is sustained between oaths of fraternal loyalty and the varied repetition of “Oui, c’est elle, c’est la dÈesse” (“Yes, it is she, it is the goddess”). As if a premonition of the subsequent scene, a woman is visible during their singing, moving through the simulated water at stage rear. 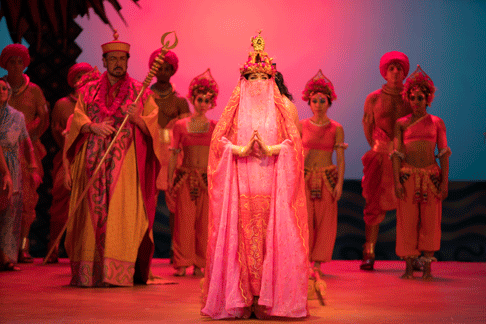