This was a stunning achievement from one so young, and announces a prodigious talent has entered the world of opera. The mere fact that Miss Deutscher has the concentration and skill to not only craft a two-and-a-half hour stage piece, but also to score it effectively for a full orchestra is nothing less than astonishing.
Ms. Deutscher has a fine ear for melody, although at this stage in her development, musical ideas are on the pleasantly generic, if tuneful side. Still, there was plenty of invention in the overlapping phrases in the duets and ensembles, and she has a real innate skill for comic invention. Vocal writing was grateful, and orchestral colors were richly layered, only lacking that final measure of detailed solo opportunities that might provide more musical commentary and depth.
Alma has absorbed many influences in her young life and they are readily apparent in this score: a bit of Wagner here, Rossini there, now Lehar, then Strauss (both of them). Indeed, with its light-hearted tone and copious dialogue, this felt at times like the best new operetta of 1895. While Cinderella is far too skillfully constructed to label it derivative, the composer is nonetheless currently speaking through a fresh pastiche of other composers’ voices. It will be intriguing to follow her development as she now matures and develops her own voice.
The young miss is also an accomplished keyboardist and violinist and while she performed nobly at select moments in the show, these extraneous passages seemed to me a somewhat cloying interruption. That said, the story of her youthful achievement has emphatically captured the public imagination, and the producers were perhaps wise to capitalize on it and give her max exposure since it resulted in added performances and SRO attendance. 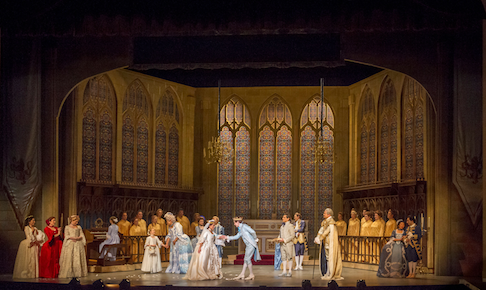 Full cast, with Vanessa Becerra as Cinderella, and Jonas Hacker as Prince in foreground center. (Note, composer Alma Deutscher is in shot, performing organ on stage.)
If the “Alma Deutscher Experience” was the leading reason for the successful run, the second most extraordinary achievement was the musical execution, starting with a nonpareil cast of some of the country’s best singers. Vanessa Becerra was perfection in the title role, her silvery, secure soprano by turns radiant and touching. Ms. Becerra has such a warm, engaging presence that when she beams your heart leaps, and when she laments, your heart breaks. Vanessa’s extended, sorrowful scena late in Act I was ravishingly sung and deeply moving. This aria is the best, most emotionally specific writing of the evening, and this talented singer made the most of the opportunity.
Jonas Hacker’s sweetly appealing, freely produced lyric tenor was a fine complement to his co-star, with his slight, boyishly appealing stature proving very sympathetic. Nathan Stark not only brought his richly resounding bass to his portrayal of the aging King, but also unleashed an inventive barrage of comic business to the mix. As the over-taxed Minister, Brian Myer was Mr. Stark’s willing cohort in the comic antics, and the duo kept the audience rapt with attention. Curiously, while Mr. Myer is a winning baritone, well loved by the San Jose public, on this occasion he sang not one solo note! Never mind, Brian is one of the best actors in opera today and his Minister is another memorable portrayal.
The luxury casting continued with the spiteful stepfamily. Mary Dunleavy made hay with the mean-spirited Stepmother, offering such suavely spirited vocalizing and committed acting that we rejoiced that this celebrated Violetta Valery brought so much alluring, polished singing to this secondary role. It is fascinating that Stacey Tappan (Griselda) and Karen Mushegain (Zibaldona) could sing so beautifully while chewing mouthfuls of scenery as the stepsisters. While they conveyed unrestrained comic abandon, every piece of business was meticulously calculated. Moreover, Ms. Tappan’s crystalline, poised soprano, and Ms. Mushegain’s robust, shining mezzo were delectable to experience singly or in tandem.
As Emiline, Claudia Chapa is first seen in disguise as a beggar woman, then turns out to be the fairy godmother figure. Her first phrases did not seem to lie comfortably for her, with ascending figures that repeatedly bridged the break. Happily, Ms. Chapa came into her own in the finale of Act I, when her earthy, distinctive mezzo first caressed lush passages, then at last roared and soared. Alma’s sister Helena Deutscher had a scene stealing turn as a flower girl at the wedding. Andrew Whitfield’s well-schooled chorus performed admirably.
Continuing the incredible roster of major practitioners, internationally renowned conductor Jane Glover led a sensitive, responsive performance in the pit. Maestra Glover clearly relished the material and the sense of “occasion,” and her sure baton drew magical results from even the more naÔve portions of the score.
The physical production was easily the most lavish I have yet experienced in San Jose. Steven Kemp’s sumptuous scenery was a riot of color and invention. Whether a backstage view of an opera auditorium, a coolly atmospheric forest of birches, the king’s handsome chambers, or the ornate ballroom with a massive, movable staircase, this was a triumphant use of the relatively limited stage space. Just when you thought the visual feast was over, the curtain rose on the final scene to reveal an imposing, stained glass windowed chapel replete with choir stalls and organ.
Matching Mr. Kemp’s over-the-top sets, costumer Johann Stegmeir seems to have been spared no expense in creating admirably detailed attire. Opulent court attire was rife with pastel and cream hues; pre-ball Cinderella, the disguised Prince, and the beggar woman were clothed in mostly earth-toned, roughly textured fabrics; the step-sisters were tastefully garish; and Stepmom was given an eye-popping red ball gown. No detail was overlooked, including well-considered footwear and characterful wigs. David Lee Cuthbert lit the proceedings with consummate skill, and his well-integrated projections were effectively complementary.
Director Brad Dalton devised effective stage pictures, practiced cleverly varied stage movement, and had the characters interact with broad clarity of purpose that carried to the top tier. He managed to not only enliven the proceedings, but also successfully kept the pace going in a rather-too-long evening. At this point in her acclaim, I am not sure how receptive Ms. Deutscher (and her family) are to having a seasoned eye shape the piece further, but there are opportunities to trim and focus that could make this charming first success be even more engaging.
At the end of the day, the total package of a young talent’s sensational burst to prominence, and a buoyant production of the highest professional standard combined to make this the once-in-a-lifetime opera-going event that had audiences standing and cheering. The Packard Humanities Institute and Opera San Jose should be justifiably proud of their achievement in presenting this high profile English language and US premiere.
James Sohre