The original premier’s set design by Robert Brill seemed to me not only definitive, but almost inextricable from the work’s success. Problem is that only the largest, most solvent companies could accommodate its demands.
The new, streamlined version on display in Salt Lake City not only keeps all of the fluid changes and atmospheric background for the monumental story, but actually also improves the stature of the work. With fewer eye-catching bells and whistles in the visuals, the ear is freed to pay closer attention to the bells and whistles in the score, and I was surprised how much richer I found Mr. Heggie’s accomplishment to be. More on the success of the design will follow.
I wholly admired the original conception, but on this occasion I came to believe this is the composer’s finest work to date. The score is wonderfully colored; the sea effects are sometimes lulling, sometimes wrenching; vocal writing is grateful and characterful; and the imposing, monumental, goose bump-inducing orchestral and choral writing that sweeps listeners along to the shattering climax are effectively balanced with moments of camaraderie and infectious humor. 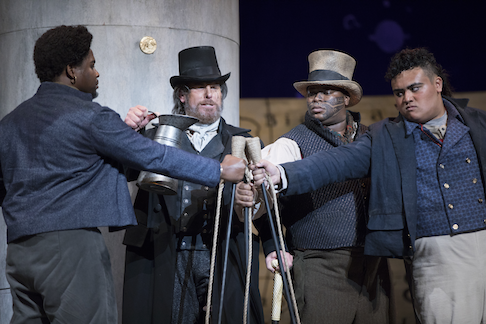 Conductor Joseph Mechavich displayed equal flair for both the rhapsodic and intimate extremes in this varied score, and he shaped the evening’s musical arc with a firmly controlled reading. It helps that he has a seasoned ensemble of players under his baton, playing with a polish and unity of purpose that comes from having full-time employment as an orchestra. This fine band is one of the few in America that are employed 52 weeks a year and that approach pays big dividends in musical quality and cohesiveness.
Maestro Mechavich is aided mightily by Michaella Calzaretta’s superb choral preparation. Her large chorus was flawless in tonal beauty, dramatic engagement, and clarity of diction, even when performing busy stage movement. The musical excellence carried over to the principal singers who proved a top tier collective of singing actors.
Roger Honeywell doesn’t so much sing the role of Captain Ahab as inhabit it. Mr. Honeywell prides himself on being a committed actor first, and a suave vocalist second. In many of my memorable experiences viewing his performances, he has struck a bargain and offered tonal beauty and theatrical fire in equal measure. In this role assumption, Roger tilts the scale decidedly to the dramatic side, coloring his substantial, heroic tenor with ire, fanaticism and fateful determination.
While this makes for chilling dramatic effects, there are times that the voice turns hard, or even a mite unsteady. I have no doubt that this is his intent. His anguished, raspy moans as he dozes, are emitted with a huskiness of vocal production that would send most singers into apoplexy. But there is no question that Roger Honeywell, with his perfect diction and total emotional investment anchored (pun intended) the show.
As Starbuck, the strapping baritone David Adam Moore threatened to run off with the vocal honors. His beautiful, easily produced tone was even throughout the range, and his sensitive phrasing and dramatic understanding made a most appealing case for this sympathetic character. He found his equal in Joshua Dennis’ polished, mellifluously sung Greenhorn. Mr. Dennis’ well-schooled lyric tenor is not exceptionally large, but it is so well focused, and so limpidly produced that he made a resounding impression. He also embodied real pathos in his moving final scene.
Musa Ngqungwana brought a winning persona and orotund, rolling bass-baritone to the exotic character Queequeg. He not only impressed with his distinctive solo moments, but also made solid contributions in his touching duets with Mr. Dennis’ Greenhorn. Indeed the two created a magical, infectious relationship that was most appealing, and the major subplot in the story. 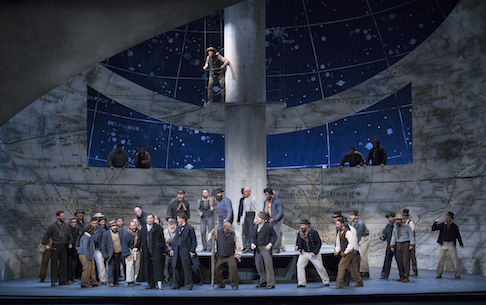 Joseph Gaines turned in his usual high quality performance as Flask, marked by a well-defined characterization, a good sense of fun, and a securely deployed tenor. His buddy, Stubb was enthusiastically impersonated by Craig Irvin, who showed off a shining, meaty baritone that was steady even as he was called upon to simultaneously do a sprightly jig. Indeed both Mssrs. Gaines and Irvin were delightfully fleet of foot in their animated performances.
The sole female voice, serving the role of the boy Pip, was the vibrant soprano Jasmine Habersham. The diminutive performer was suitably juvenile and her well-controlled, silvery tone had an alluring presence. Perhaps her voice is too “womanly” to utterly convince as the hapless lad, but this was an impressive role assumption, delivered with fierce commitment. Jes˙s Vicente Murillo did admirable double duty as Captain Gardiner and a Spanish Sailor; Babatunde Akinboboye made the most of his stage time as Daggoo; and the role of Tashtego was well-served by Keanu Aiono-Netzler. Anthony Buck was the firmly intoned Nantucket Sailor.
As impressive as all of these demonstrably fine singers were singly, they were most remarkable for their impressive ensemble work, thanks to inspired direction from Kristine McIntyre. Ms. McIntyre thrives on large cast extravaganzas, managing to move masses of singers meaningfully about the playing space, all the while effectively focusing attention on solo moments as required. She crafted richly detailed character relationships, and seemed to effortlessly manufacture one telling stage picture after another.

Having recently marveled at her Billy Budd at Des Moines Metro Opera, I am wondering if she is entering the nautical phase of her career? What’s next Kristine? Pinafore? Dutchman? I would sail well out of my way to see anything this talented director undertakes. She is especially adept at synchronized gestures, steps, and percussive effects, and there were many potent passages of unison group movement, with effective choreography incorporated by Daniel Charon.
Set designer Erhard Rom is celebrated not only for his artistic gifts but also for mounting attractive multiple sets with economy of means. His evocative, practical solutions here are praiseworthy indeed. Mr. Rom has borrowed a page from Wieland Wagner and placed a disc/platform center stage. Decorated with what suggests a compass, it spins to create multiple effects, with stairs, sleeping cubicles, and even a prow.
A large totem of a mast, with a perilous looking crow’s nest dominates the visuals dead center. The backdrop looks like someone took an old nautical map and subjected it to an imaginative paper cutting. The resulting silhouette with its swooping dip in the top center and large panoramic “window” suggests a colosseum. It turns out that opening can be closed by four separate panels, a device masterfully used in various combinations.
Mr. Rom meets the other requirements of varying locations by adding or subtracting furniture, angular insets flown in and out, and simple set pieces like the whaling boat. The grand drape not only sets the mood with its depiction of turbulent waves but is used for a startlingly good effect near opera’s end. 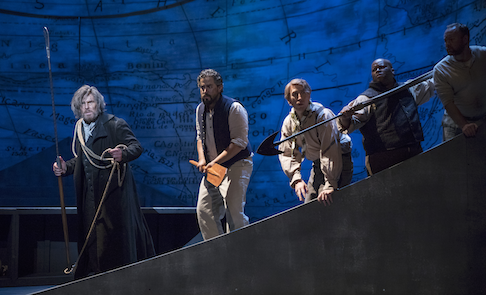 Lighting Designer Marcus Dilliard has provided one superb effect after another, from an azure starry sky to the fiery glow below deck to the mottled light of late afternoon to a gathering storm to a stylized whale hunt. Mr. Dilliard’s general washes always create just the right ambience, and his use of tightly focused areas and specials was highly proficient. Jessica Jahn’s spot-on costume design and Yancy J. Quick’s comprehensive wig and make-up design completed the look by so ably defining the characters and their stations.
The one important moment neither the original design nor this one fully mastered was the critical climactic moment of Ahab’s fateful confrontation with the whale. Rom, McIntyre, Dilliard and company have definitely come very very close. I will not spoil the surprise but I can say a truly menacing suggestion of the killer whale comes about in a surprising fashion. Ahab is suitably terrified, the music churns, the tension builds inexorably and then. . .the scenery takes an easy way out.
Still, this was such a stunning achievement full of so many memorable components, that it is easy to predict this winningly re-imagined Moby Dick will have a long and full run on national and world stages.
James Sohre
Cast and production information:
Captain Ahab: Roger Honeywell; Greenhorn: Joshua Dennis; Starbuck: David Adam Moore; Queequeg: Musa Ngqungwana; Flask: Joseph Gaines; Stubb: Craig Irvin; Pip: Jasmine Habersham; Captain Gardiner/Spanish Sailor: Jes˙s Vicente Murillo; Daggoo: Babatunde Akinboboye; Tashtego: Keanu Aiono-Netzler; Nantucket Sailor: Anthony Buck; Conductor: Joseph Mechavich; Director: Kristine McIntyre; Set Design: Erhard Rom; Costume Design: Jessica Jahn; Lighting Design: Marcus Dilliard; Choreographer: Daniel Charon; Wig and Make-up Design: Yancey J. Quick; Chorus Master: Michaella Calzaretta