And to this day “Tu del mio Carlo al seno” and its cabaletta remain a showpiece for sopranos, not to mention the “Parea mi che sorto da lauto convito” that is a blockbuster showpiece for baritones. There is even a greater amount of splendid music for tenor, starting with the opera’s initial scene “O mio castel paterno” that creates the situation that will result in the brutal murder of the soprano.
?
Just now in Rome the tenor Carlo, yearning for his childhood home, was sequestered up on some sort of rolling scaffold on the side of the stage for this first scene (and most of the opera), but upon learning that his father has disinherited him he vowed to remain in a band of robbers who plunder the countryside (and in this production brutally rape women). The robbers rose magically on one of Teatro Costanzi’s famous full stage elevators and he agreed to become their leader. 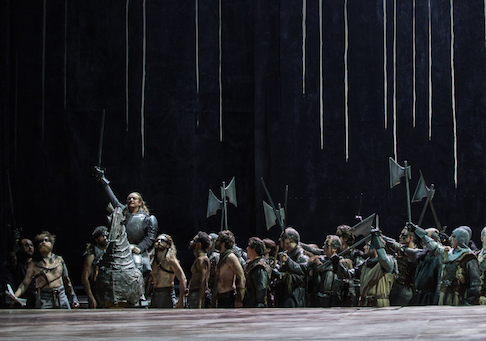 Carlo (Stefano Secco) becoming leader of Verdi’s bandits
?
Meanwhile we learn that the baritone had deceived the tenor. The tenor had not been disinherited after all, he could in fact have renounced his dissolute life and returned home. The problem now becomes the tenor’s sworn loyalty to his band of robbers, not to mention that the soprano from his former upright life loves him. Unfortunately the conniving baritone wants to marry her. So there was a lot to sing about.
?
The metteur en scËne of this new production was popular 57 year-old Italian actor and voiceover artist (for dubbing films) Massimo Popolizio. Mr. Popolizio made his directorial debut only last year with Author Miller’s 1968 play The Price. Mr. Popolizio is said to have based his staging of The Bandits on the popular U.S. TV series Game of Thrones. Maybe this explains the several scenes of gratuitous gang rape. Unlike the well developed threads of Game of Thrones, Mr. Popolizio left Verdi’s admittedly worst libretto without a discernible story line. We will never know from Mr. Popolizio why Carlo (the tenor) murdered Amalia (the soprano) just after their ardent declaration of love.
?
It was an an evening about singing, not about theater. After overcoming quite deserved opening night nerves the mostly Italian cast sang stylishly. Unfortunately tenor Stefano Secco (San Francisco’s 2014 Pinkerton) as Schiller’s questionable hero Carlo did not deliver the opening scene with sufficient pizazz to impress the audience which, despite his intense and eloquent (though small scale) delivery of the third act, awarded him vociferous boos at the final bows.
Twenty-nine year old ingenue diva Roberta Mantegna, a recent graduate of Rome Opera’s new young artist program, negotiated Amalia’s treacherous outpourings with knowing aplomb, belying the fact that this was her debut in a major role on a major stage. Additional maturity of voice will add effect to her Amalia. 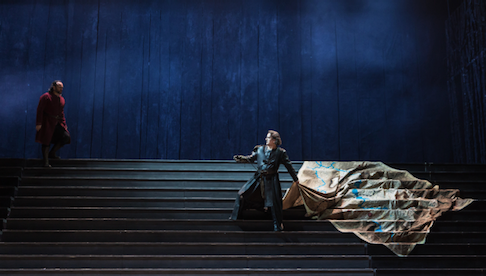