In a letter to Nadezhda von Meck, written in 1878, reflecting on his
admiration for developments in French music in general and Carmen
in particular, Tchaikovsky predicted that in ‘ten years hence, it will
become the most popular opera in the world’. He was right: 150 years on Carmen is probably the best-known, most oft-performed opera,
adapted and translated into myriad other art forms from Oscar Hammerstein’s
1943 musical Carmen Jones, to Matthew Bourne’s homoerotic balletThe Car Man (2000) to Jean-Luc Goddard’s 1983 film, First Name: Carmen.

Kosky seems to have set out to wipe the slate clean. And, the first thing
to be jettisoned is Spain: Carmen has lost her castanets. In an interview
published in the

, the director explained that he had told his designer, Katrin Lea Tag, ‘We
are not setting the production in any place. We don’t need to worry about
what country are we in; we can do whatever we bloody well like.’ No matter
that Spain – as envisaged by hispano-manic 19th-century France –
is embedded in both text and score. There’s no place for Prosper MÈrimÈe’s
racial and social ideology in this production, nor for Sevillian sunshine
and cigarette factories. 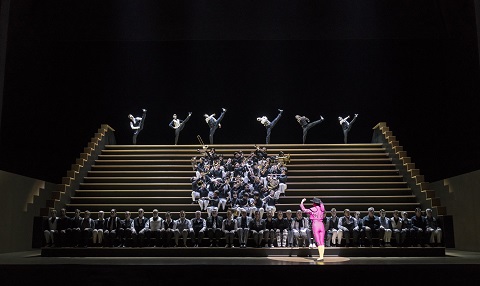 The ‘set’ comprises a stage-wide staircase which slides forward and back
but which otherwise presents a stationary ‘terrace’, up and down which cast
and chorus stride and clamber athletically. We are not in Andalusia at all,
rather in a Greek amphitheatre or Roman Coliseum. Or, perhaps, we are at the bull-ring, though this Carmen certainly does not plan
to be thrown to the lions or thrust by the matador’s etosque. It’s
she who is wearing the traje de luces, flamboyant in cerise with
gold stockings, when she appears at the top of the staircase and surveys
all with a brazen haughtiness. 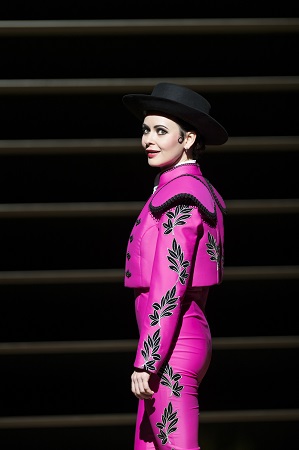 Kosky’s Carmen is a role-playing chameleon. She responds to the exalted
appeals of the adulating crowd with a ‘habanera – but not as you know it’.
Lumbering down the steps in a gorilla suit – woman as wild beast, then, not
‘oiseau rebelle’ – Carmen is divested of her claws and paws by fawning
dancers before ripping off her fur to reveal a modern, sharp suit: tight
black trousers, white shirt, narrow tie – to which the dancers add gold
stilettos. She swaps these for black ankle boots when she viciously kicks a
cigarette-factory worker down the stops, and she constantly re-invents
herself, trading a flamenco-tinted black dress for a feathered flapper
gown. Finally, she dons a lustrous black evening dress, a subversion of a
bridal gown, its gargantuan, fateful train, fanning the staircase like a
peacock’s invitation, made iridescent by Joachim Klein’s lighting.

Alongside Escamillio (resplendent in gold with pink silk stockings, thus
inverting Carmen’s own initial costume), Carmen’s black veil gives her a
mourning air – more Dido than diva. Does the immobilising train trap her?
Previously, she had strutted angrily, proudly across the stage, her hands
tied by Don JosÈ’s rope: but, there are two ends to a rope and it was
ambiguous just who controlled the leash. Indeed, it wasn’t long before JosÈ
found himself bound, ridiculed and imprisoned. In the final scene, the
desperate soldier lunges for her train but it seems to suffocate him when
she simply rips it from her waist. Free from the man perhaps, but not from
his knife.

It’s hard, though, to care about an ‘actor’ who mutates from masculine to
feminine via androgyny and who seems to have no emotional connection with
any one else, so obsessed is she with constructing and controlling her
‘self’. There’s certainly no hint of sexual chemistry with JosÈ. Standing
stage-centre or atop the staircase, the characters face the auditorium and
sing to us, never to each other. And, this emotional sterility is echoed by
the overall tone of Kosky’s production which seems to hold the passion and
pathos of Bizet’s opera at a distance, pinched by a pair of ironic tongs.
Kosky references vaudeville, circus and Weimar cabaret as his six dancers
tap, shuffle, twirl and swing their way around Carmen and the cast, in
choreographer Otto Pinchler’s dashing and dizzying routines, but the
relentless camp razzmatazz becomes rather wearing. Apparently Kosky told
his cast, ‘You’re in an operetta. You are not in “le grand opÈra”’, and it
really is one long sardonic joke, as if Kosky has mis-translated ‘opÈra comique’. 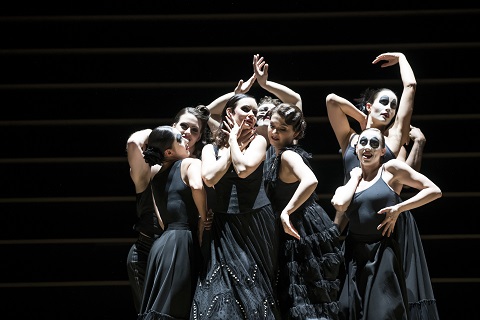 Of course, he hasn’t. But, don’t expect any spoken dialogue, either.
Instead, a pre-recorded female voice (Claude de Deno as ‘The Voice of
Carmen’) reverberates in the theatre, relating, with breathy sultriness, an
amalgam of MÈrimÈe’s narration and some stage directions. Sometimes the
latter prompted a snigger, as when the explanation ‘When the curtain rises,
the audience see a bleak hillside’ cued a stage-picture of sleeping
smugglers scattered across the staircase-terraces. The recorded voice also
further distances us from the action. Yes, MÈrimÈe’s novella has a
double-frame which allows the tale of violent disorder and murderous
Otherness to be controlled and contained by the logical narrative of the
erudite Frenchman who has travelled to Spain on an archaeological quest.
But, Meilhac and HalÈvy had good reasons for excising this framing device
when composing the libretto. In the theatre we need action, not narration:
Kosky ‘tells’ us what’s happening, and this saves him from having to ‘show’
us, or from having to link the vignettes into a coherent drama on stage.

The narration also contributes to the long running-time: the first two acts
form a first half lasting two hours, and the final act lacks impetus. There
is ‘extra’ music, too. Arguing that there is no definitive edition of Carmen (in a programme article, Michael Rot, who prepared the
critical edition used here, explains that there are ten extant versions of
the opera dating from 1874 to the first publication of the score on 1877),
Kosky has restored some numbers that were cut either before or after the
premiere in 1875. These include a ‘ScËne et pantomime’ after the Act 1
Introduction, in which MoralËs invites the audience to watch attempted
rendezvous between a pretty young wife and a handsome Spaniard under the
eyes her aged husband; an extended duet for MicaÎla and JosÈ, and the
original Habanera which Kosky appends to the first part of the more
familiar dance-song, pasting over the join.

However, although various factors – such as Bizet’s death three months
after the premiere, Ludovic HalÈvy’s destruction of the original rehearsal
notes, and the ambiguity of the autograph score into which Ernest Guiraud’s
subsequent recitatives were bound – do complicate the ‘authenticity’ of any
one version, the composer did himself correct the first-published vocal
score which Choudens produced at the time of the first performance. I
couldn’t find any dramatic reason for including this extra material, though
it had novelty interest.

Making her house debut, Russian mezzo Anna Goryachova acted superbly in the
title role. She was a tense and menacing Carmen, confident and contemptuous
in equal measure. This Carmen was cruelly sardonic rather than overtly
sexy, but Goryachova’s mezzo has an alluring darkness. She tired a little
towards the close and this resulted in a few intonation problems. I was not
particularly taken with Francesco Meli’s JosÈ, though many in the House
were obviously appreciative. There were some unpleasant rough edges as he
forced his fairly light tenor to produce a full-bodied forte and
he seemed unable to begin a phrase without swooping to the note from
beneath. His piano singing was more sensitive, but he veered from
loud to soft rather unevenly. 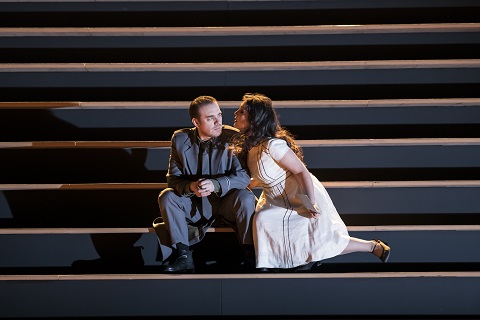 Kristina Mkhitaryan has a big voice and its power at times belied MicaÎla’s
delicacy, but her Act 3 aria was well sung. Kosky didn’t seem very
interested in assimilating this character into his concept, though; her
white dress marked her as the odd one out among the otherwise ‘shades of
black and grey’ costumes, and it wasn’t clear what this young girl who
sings of real human emotions and relationships was doing amid the
play-acting artistes – such as Kostas Smoriginas’ Escamillo whose
hyperbolic triumphal entry had a whiff of pantomime about it. In the
aforementioned interview, Kosky remarked, ‘I said, “Let’s just put
Escamillo in a fabulous toreador’s costume.” When he comes on, everyone’s
waiting for that number — and we turn it into a huge number. I said, “Just
make sure the toreador costume looks fabulous, and it solves the problem”,’
but I’m not sure that it does/did. Smoriginas was secure but a little
underwhelming vocally, especially at the bottom, and no amount of gold lame
or silver sparkle was going to change that. 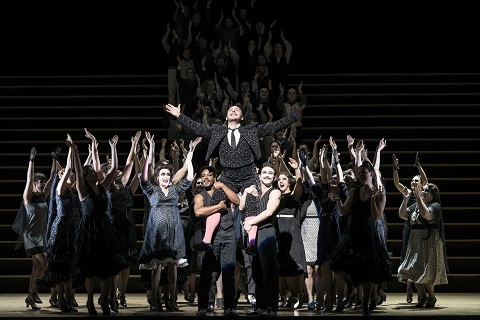 Carmen metamorphoses, but no one ‘develops’; the result is that David
Soar’s Zuniga and Gyula Nagy’s MoralËs, though well-sung, don’t make much
impact, though as Frasquita and MercÈdËs, respectively, Jacquelyn Stucker
and Aigul Akhmetshina offer brightness and vivacity to complete Carmen’s
dark allure, and give energetic, committed performances.

Conductor Jakub Hr?öa took us unawares at the start, sweeping into the
toreador’s theme which commences the overture as the House lights plunged
us into darkness, breaking off our chatter. Hr?öa adopted fairly swift
tempi and conjured a delicacy and subtlety in the pit that was absent from
the stage. The Act 3 prelude was beautifully played, and there as some fine
horn-playing in MicaÎla’s aria. The ROH Chorus were similarly on, characteristically, excellent form.

Kosky seeks to crystallise extreme emotions in a series of essentially
self-contained tableaux but in so doing he removes these emotions from any
dramatic continuum or genuine human context and interchange. Who is this
Carmen? A femme fatale with a death-wish? A bel canto
stereotype whose destruction we demand but whose voice transcends death? An
archetype? An actress?

In the final moments, she rises from the ground with an ironic shrug which
is both Carmen’s and Kosky’s last word. A frustrating one. Carmen has acted
her story, as she wants it told, and she is reborn to tell it again. Her
life is an act: there’s nothing ‘real’ – and while we can live without
visual realism – the lack of both verismo passion and simple human feeling
are more troubling.