The Joel production, here revived by stage director Sandra Pocceschi (a Castellucci assistant), approached masterpiece status, exploiting the intimacies and the unique acoustic of the ThÈ‚tre du Capitole, enjoying the splendors of its excellent orchestra, and profiting from an essentially perfect cast.
It is a rare pleasure to address an isolated Walk¸re in this recent (10 or so years) avalanche of entire Rings worldwide. Die Walk¸re is the one of the Ring’s operas that easily stands alone as a human document without need to be absorbed into larger 19th century philosophical concepts.
The Joel staging, in collaboration with Giorgio Strehler’s designers Ezio Frigerio (scenery) and Franca Squarciapino (costumes) eschews concept (no California gold rush for example), instead it explores a theatrical language (style) to expound the multiple crises of Wotan, the deeply human feelings of Brunnhilde, the forbidden love of Sieglinde and Siegmund, and the outrage of Fricka and Hunding. 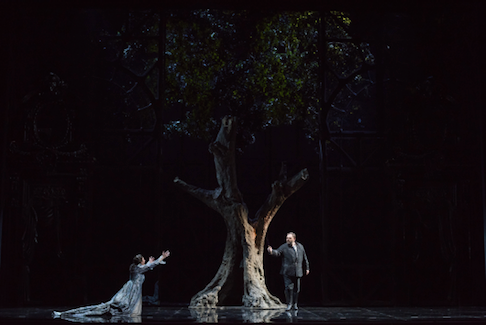 Sieglinde and Siegmund
The language is of the utmost simplicity. The set is a changing montage of ever present imperial architectural elements in front of a huge steel superstructure, though there is the sword-bearing abstracted tree trunk in the beginning. Costuming is in rich garments of basically medieval cut in grays and blacks and pastel hues.
Wagner imagined his music drama with its orchestra as the primary voice. The ThÈ‚tre du Capitole’s pit is very present, both visually and acoustically, its forte’s and then triple forte’s roar without impeding clear projection of voice from the stage. The intimate comments of Wagner’s much used bass clarinet, oboe and bassoon are no less present in their isolated purity.
Wagner’s poem flowed from the stage, its words never obfuscated, only enriched by orchestral colors. Wagner’s actors were sculpturally placed for their extended monologues, their extended stylized postures (a head hung for example) illustrated the emotions flowing from the orchestra. Gestures were broad, and when they occurred they were quite pointed — like the gazes of recognition between Siegmund and Sieglinde, or Wotan’s slapping of balustrades in his frustration or anger.
The dancing of the flames that surrounded Br¸nnhilde then burst (one giant flash of real flame, then smoke and lights) into a magnificent force of conflagration that the father Wotan knew would protect his daughter. The Joel staging defined pure music drama, as the ThÈ‚tre du Capitole’s orchestra traced the evolution of emotions of human love that made this nearly 6 hour Die Walk¸re finally into a uniquely enjoyable Wagnerian experience. 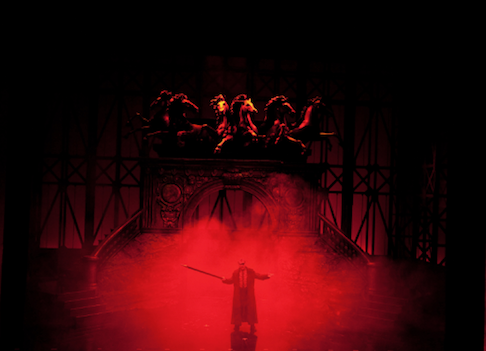 Wotan
And we leave the story at that.
Russian mezzo soprano Anna Smirnova made her dramatic soprano debut as this Br¸nnhilde. Her voice is of extraordinary power, and of a richness that amplified the surpassing humanity of Wotan’s favorite daughter. The youth of her voice was perfect for the innocence of the Walk¸re Br¸nnhilde (she is 35 years old), and her voice retained its youthful bloom to the last, intense moments of her final encounter with her father. Note that as a mezzo she will sing Eboli in L.A. Opera’s upcoming Don Carlo.
Polish bass-baritone Tomasz Konieczny brought unusually sharp vocal edge to Wotan, a god in utmost agony — he dictated the death of his son, and faced the rebellion of his most loved daughter. Konieczny was an actor in Poland before he became a singer. His Wotan was of intense concentration, his troubled postures added force to his defeat by his wife Fricka, his berating of the Valkyries was wearied and sharply apprehensive. Note that he sings Wotan in the Vienna State Opera’s upcoming Ring.
Strauss specialist, 50 years-old German soprano Daniela Sindram made her role debut as Sieglinde. She possesses a purity of voice that added pathos to her adultery and incest and her impending maternity, and impeccable technique that revealed the anguish of her attachment to her brother and lover. Likewise in his role debut as Siegmund, German tenor Michael Kˆnig exposed a purity of youthful helden tenor sound that made his remembrances of his earthly father vivid, and made his declaration to Br¸nnhilde of his love for Sieglinde persuasive.
Russian bass Dimitry Ivashchenko was a menacing, beautifully sung Hunding. German mezzo Elena Zhidkova made Fricka appropriately shrill and rigid. The Valkyries were a noisy lot, wandering around a Valhalla courtyard amidst the piles of fallen heroes in bloody underclothes that they unceremoniously (bizarrely) dragged around like dead meat.
This Die Walk¸re began and ended in the pit. German conductor Claus Peter Flor, long associated with Toulouse, oversaw this Wagnerian masterpiece with musical clarity and Wagnerian insight, magnifying its humanity in his precisely dramatic reading of the score. The ThÈ‚tre du Capitole orchestra responded with utmost concentration, swelling to magnificent climaxes, joyfully popping the flames in its overture and again at its finale.
Michael Milenski