First, the company has chosen to tell the story and serve the composition, rather than impose a concept and serve themselves. It was a “first” for me to ever see real spinning wheels in the spinning scene! No kidding. I have seen, oh, let’s see, Senta in a spinning class at a fitness center, ladies spinning ship’s helms, and ladies just spinning themselves in circles. What a breath of fresh (sea) air to see such a beautifully straightforward rendering of Wagner’s intentions. That is not to say there wasn’t plenty of vibrant creativity on display.
Steven C. Kemp has designed a setting that is effectively modular, all the while framing it in a handsome fixed unit. An imposing upstage wall is flanked by angled walls stage left and right, all richly textured with planking. That wooden look, suggestive of a ship’s deck is carried over to the stage floor, this entire construction forming a sort of reflective shell that greatly enhanced the acoustic. 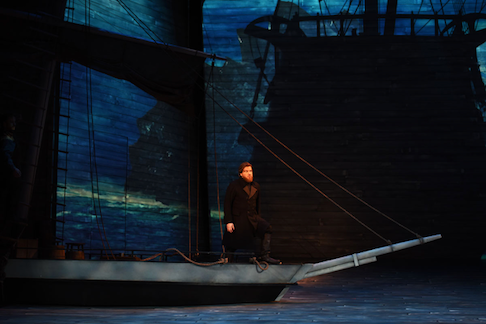 Gustav Andreassen as Daland
Walls can fly and retract, allowing for the addition of other scenic elements: the upstage row of windows in the spinning room, Daland’s merchant ship down right, rustic tables and benches for the revelry in the final scene. That this simplicity worked so well owes a great debt to the sumptuous, variegated lighting design by David Lee Cuthbert and especially the superlative projection design by Ian Wallace.
Wagner often envisioned stage effects without workable ideas to execute them, and in this case a spectral ship with ghostly, singing passengers must appear on cue; Senta must sacrifice her life with a suicidal leap into the roiling sea; and the Dutchman’s redemption must be visualized. It is to this talented team’s credit, that all of these challenges were persuasively met with uncommonly apt choices. If Wagner had know technical possibilities like this could be achieved, he would have undoubtedly come up with even more brainstorms!
Johann Stegmeir has provided a splendid array of costumes that were homey, comfortable, and definitive of their character’s stations in life. The pleasing silhouette of Senta’s lovely gown was matched by the effectiveness of its rich blue sheen. The folk nature of the chorus attire allowed Mr. Steigmeier to indulge in some careful use of color. Conversely, he applied more austerity to the Dutchman’s look, managing to make him look mysteriously appealing, without becoming grotesquely sinister. As always Christina Martin’s wig and make-up design was so “right” that we almost take it for granted.
Joseph Marcheso drew wondrous playing from his orchestra, with the banks of strings luxuriating in the lush writing. The winds were similarly characterful and stylistically secure. The brass provided exciting accents, with the horns nailing the familiar opening statement of the overture. Maestro Marcheso paced the evening with skill and obvious enjoyment and he drew impressive results that the most celebrated houses would take pride in. He also proved to be a highly capable partner with a cadre of exciting vocalists.
If this performance is any evidence, bass-baritone Noah Bouley is a rising star that seems poised to become the next Dutchman “of choice.” There is nothing about the taxing role that eludes him. Mr. Bouley has a robust, rolling tone that is well-supported and responsive to his every interpretive nuance. His rich vocalizing and well-considered musical journey resulted in a potent, cathartic performance. 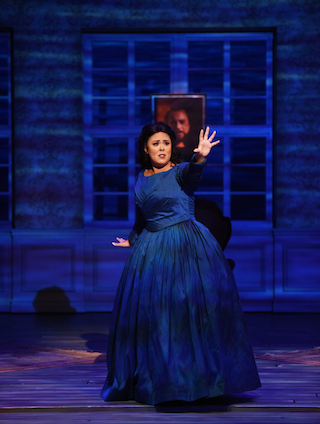 Kerriann OtaÒo as Senta
Kerriann OtaÒo’s engaging, rich soprano has the heft and beauty that makes hers a memorable Senta. Just listen to the variety of color she brings to her opening aria, and revel in its specificity and pliability. Ms. OtaÒo has the technique and musical intelligence to not only limn the introspective moments with ravishing beauty, but also ride the amassed orchestra with thrilling focus and power.
Gustav Andreassen brings a meaty, buzzy bass-baritone to the role of Daland. He is more youthful then some interpreters of this paternal role, but the sheer power of his utterance and the mellifluous tonal production fell gratefully on the ear. Derek Taylor was a splendid Erik, his steely, substantial tenor filling the house with poised phrasings.
Fresh-voiced Mason Gates successfully brought his well-schooled tenor and youthful exuberance to the role of the Steersman, and he made the most of his featured solos. The role of Mary is often doled out to veteran singers in their twilight years (Astrid Varnay, anyone?). Not so in San Jose. Nicole Birkland was easily the most impressive Mary I have yet heard, her prime, plummy mezzo filling the California Theatre with warm, expressive sound. Andrew Whitfield’s precise, robust chorus covered themselves in glory, easily giving the best performance I have ever heard from this talented ensemble.
In another first for me, San Jose performed the work in three acts, rather than the usual one long act that has been my experience. Well, sort of. While the first act had a proper intermission, and while the act curtain rang down after act two, the last two acts did nonetheless utilize the musical bridge that connects the last two thirds of the piece.
All that being said, there is no denying that Opera San Jose has presented a Flying Dutchman of such accomplishment that it could put itself firmly on the map for Wagner enthusiasts. Wunderbar!
James Sohre