The Washington National Opera and Opera Omaha. His sets were replete with perspective, flowing red curtains painted on flat canvas, and three chandeliers that could be raised and lowered at will. No designer was credited for the attractive soft colored eighteenth century costumes.
The cast was entirely made up of young singers and the stage director was Joshua Borths, Arizona Opera’s director of education and community engagement. Borths kept everyone on stage in constant motion. Six non-singing actors playing servants and townspeople kept the movement constant even when the singers were rendering major arias. However, their antics drew a profusion of laughs from the Sunday matinee audience. 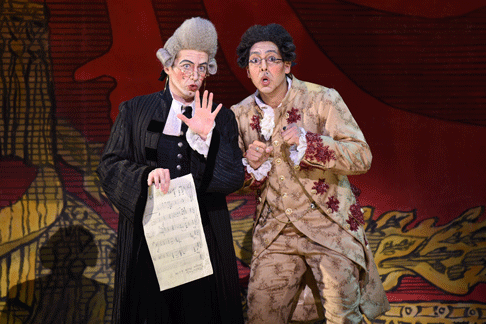 Baritone Jared Bybee was a sophisticated Figaro who seemed totally at home in his part and delivered his lines with the panache expected of the town hero. Without a padded costume to make him seem portly, bass baritone Calvin Griffin looked much too young and vital to be cast as the aging Dr. Bartolo. He sang with a young man’s energy, but his fast patter lines were lacking in volume.
Having heard a mezzo Rosina at Opera Santa Barbara on Friday evening, it was interesting to hear a soprano sing the role on Sunday Afternoon in Tucson. Katrina Galka was a kittenish, feminine Rosina who had no intention of marrying her elderly guardian. Best of all, she sang her coloratura lines clearly with silvery tones and great attention to Rossinian style. Tenor Anthony Ciaramitaro sang with a relatively large voice that was flexible enough to sing Rossini’s runs and decorations with ease. I am looking forward to hearing both Galka and Ciaramitaro again.
Stephanie Sanchez, a most amusing Berta with commanding low tones, thought Don Basilio would make her a good husband. The Don, played by Zachary Owen, thought otherwise, however, and he seemed much more interested in his men friends. A limber and energetic performer, Owen sang his venomous aria with good diction but was hard to hear in its faster passages. 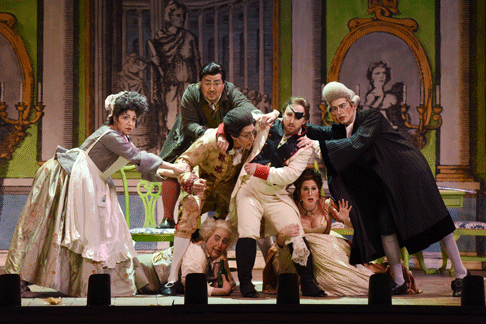 Jared Porter, Dale Dreyfoos and Jeffrey Stevens were amusing and helpful as Fiorello, Ambrogio, and the Notary while Daniel Prunaru was a serious Officer who pointed out class differences in that time and place. The men of Henri Venanzi’s chorus sang and cavorted wonderfully in this full-blooded rendition of Rossini’s most famous comic opera.
Under the leadership of Conductor Francesco Milioto, the orchestra played with high spirits and technical brilliance. Thanks to his brisk tempi, the comedy moved swiftly and joyously. The audience seemed delighted with the performance and responded with heavy applause for the artists.
Maria Nockin