Staged in conjunction with Joffrey Ballet Chicago, the production features both dance and singing. Since Oropesa sings with silver tones and moves as gracefully as a dancer, she is a natural for the part.
Where did you grow up?
I grew up in Baton Rouge, Louisiana. I went to several different schools growing up, and got to know lots of different people. We attended church on Sundays, and my mom was the junior choir director there. That’s where I got my major start in singing in public, as I sang solos almost every week. I started playing the flute as a “tween” as well, and have many wonderful memories of being in band and orchestra.
Did you study piano? Other instruments? Guitar?
Yes I studied the flute formally for about 10 years, and I do play some piano by ear, as well as guitar! 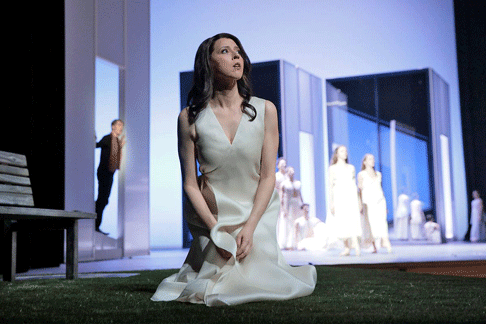 Lisette Oropesa as Eurydice [Photo © Ken Howard]
When did you see your first opera?
My mom, Rebeca Oropesa, was a singer so I saw operas that she was in. I think my first was La Traviata when she was singing Violetta. The first opera I was ever in was Hansel and Gretel, at the Baton Rouge Opera, in which I played one of the gingerbread children. I saw very littls opera on TV, but we heard it on the Met radio broadcasts, which my grandpa diligently recorded every week. He had an extensive collection of recordings that he accumulated for many years. So yes, I heard my fair share!
Does that treasure trove of broadcast recordings still exist?
Sadly, a lot of it was destroyed in Hurricane Katrina years ago, but my grandparents still do have a lot.
Are there any artists or musicians from the past whose work has significantly influenced you?
My mom was a big fan of Anna Moffo growing up, so I heard her voice and artistry a lot. My grandfather had a beautiful tenor voice so we heard a lot from the three tenors, too. My mom would always discuss their voices, including which ones we liked best in which repertoire.
Who were your most important teachers?
My mom was my first real teacher and she still gives me a lot of help with my singing. My voice teacher in my university years as well as now, is Robert Grayson at Louisiana State University. My New York based voice teacher is Bill Schumann. They are the people I trust the most and get the most advice from.
What did you learn from your teachers that you would like to see passed on to the next generation of artists?
There are lots, but one of the most important things I learned from them that I do use daily, and pass on, is the International Phonetic Alphabet! It’s so important to know your vowel sounds and be able to us them across all languages.
Do you teach?
I don’t teach private students but I have taught a few master classes and given voice lessons at the university level.
Have you won any big competitions?
Yes! I won the Metropolitan Opera Competition, The George London Award, the Loren Zachary Society Vocal Competition, as well as prizes at the Richard Tucker Foundation and Operalia.
Did you attend one or more young artist programs?
Yes, I attended the Lindemann Young Artist Development Program at the Met from 2005 to 2008. It was like conservatory training in the setting of a real opera house. I had coachings, language classes, studied roles, took voice lessons, and movement classes. I was at the Met all the time seeing how the incredible opera house runs. We got to see every single final dress rehearsal so we got to enjoy a lot of productions and learn from the best! 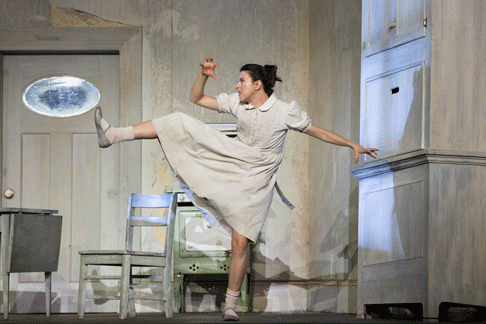 Lisette Oropesa as Gretel [Photo © Marty Sohl]
What kind of role best suits your voice?
I have said no to roles that are too high or too heavy. I feel that the best roles for me are lyric coloratura parts, a few Mozart and Handel roles, and a few French parts that are on the lyric end of true coloratura.
Which are your favorite roles?
I enjoy singing Violetta in La Traviata and Lucia di Lammermoor
the most. I like these roles because they are very fulfilling musically and dramatically. They are the epitome of bel canto and a true showcase for the soprano. They are also great characters to play because they both have incredible stories, and difficult circumstances. They live in an unfair society which dictates a lot of their struggle. I love playing both of these characters very much.
What important performances do you have coming up this season and next?
I’ve got debuts coming up that I’m excited about, such as the one at the Rossini Opera Festival in Pesaro. I will sing the title role in Rossini’s Adina and I will make my debut at the Teatro la Fenice in Venice as La Traviata. I’m also really excited to be returning to the Paris Opera for L’Elisir d’Amore. It’s my role debut.
How do you feel about the emergence of the stage director as a major force in opera?
I have learned a lot of incredible things about performance from stage directors, both for acting and movement, as well as interpretation. They are often like psychologists and can read you at the deepest level. I feel that I have done my best work because of directors who bring out those depths in all of us in the cast and we all inspire each other.
What recordings do you have out?
I released my first album, officially, last year. It’s called Within/Without. It’s available on iTunes and via my website; here’s the link to it. https://lisetteoropesa.bandcamp.com/album/within-without
I did a Spanish set of Obradors, along with music by: Schubert, Haydn, Mendelssohn, Poulenc, and Barber, plus Meyerbeer for my encore aria.
Do you have other recordings coming out in the near future?
I’m working on releasing some more recital repertoire as downloadable tracks online.
What do you see yourself doing five years from now?
Hopefully the same things I’m doing now but with a few more new roles sprinkled in, such as Juliette, Puritani, and Manon.
How much modern technology do you use in your work?
Not that much really, I still use paper scores, highlighters, pencil and paper, and a piano. I do record myself with my iphone, marking through any hard bits in a part so I can memorize them. I also listen to recordings but I don’t really rely heavily on them.
How do you feel about downloads replacing compact discs?
For opera recordings I’m thrilled to have so many resources available online! There is is a wonderful wealth of music out there available for us as singers. I have been bringing CDs to my recitals and it’s nice for people to be able to walk away with a copy if they want one. I am also working to get the album available in opera gift shops. It’s at the Met, Los Angeles Opera, Dutch National Opera, and Glyndebourne.
Do you ever have time for a private life?
Yes, my wonderful husband Steven travels with me and we have made our work homogeneous. He’s a web developer, and his skills with technology have been irreplaceable in producing my recordings, creating and maintaining my website, photos, social media, and videos. We run together and cook together, and really are so happy in this life. He loves traveling and has found his stride in this career path with me. I’m so lucky!
Do you have any interesting hobbies?
Yes we love cooking, running, wine, and good old fashioned debate. We are vegan so we cook all kinds of incredible dishes from all different types of cuisines. Our favorites are Indian curries. We love to drink Burgundy wines, or wines from the state of Oregon such as Pinot Noir and Chardonnay. When we debate it’s usually about big philosophical ideas that have no right or wrong answer. We try to solve the world’s problems.
Maria Nockin