The piece is composed by Stewart Copeland (co-founder and drummer for The Police) to a libretto he wrote with Jonathon Moore. The surreal tale is based on La invención de Morel by Adolfo Bioy Casares. Being highly theatrical, the story is anything but linear. Impressions go back and forth in time, blurring reality, fantasy, truth and illusion.

There is a nice suspenseful build to the revelation of the exactnature of Morel’s “invention.” Character relationships are Pinteresque in their blurred details. Dr. Morel and his guests are on an island having an outing of some sort. Or are they really? A Fugitive happens upon the island from “somewhere.” Or has he? The Narrator figure is actually the Fugitive observing himself as he comments on the disordered episodes his doppelgänger experiences in real time. Got that? Or is it all in his head? Or ours? The creators turn time and space on their heads in this puzzling yet satisfying magical mystery tour. 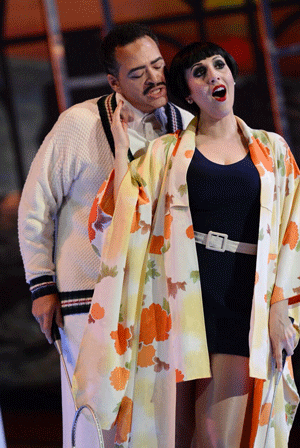 LBO was blessed with a superlatively talented cast. As the mirror image, co-dependent Fugitive and Narrator, baritones Andrew Wilkowske and Lee Gregory were uniformly superb. Mr. Wilkowske has a buzzy, commanding sound and he invests his interpretation alternately with a tormented heat and touching vulnerability that make his character very sympathetic. Mr. Gregory manages the feat of commenting powerfully and cogently on the actions even as he is forced to relive unutterably painful moments over and over again. Lee’s overwhelming, highly polished, emotion laden vocalizing was one of the production’s great glories.

As the Eternal Feminine character Faustine, Jamie Chamberlin offered some astonishingly limpid and secure singing, her shimmering soprano gleaming in all register and volumes. Ms. Chamberlin conquered al the demands of this rangy role, offering some jaw-dropping forays above the staff. Nathan Granner was a revelation as Dr. Morel, lavishing his every phrase with an effortlessly produced lyric tenor that had substantial, gold-infused weight. Mr. Granner was fearlessly accurate in his easy execution of passages lying so high they threatened to live where only dogs can hear.

As the guests “along for the ride” in this surreal happening, Cedric Berry was a solid, suave, warm-voiced Stoever; Doug Jones clearly relished his sturdy double duty as Alec and Ombrellieri; Suzan Hanson was an alluring, silver-toned Dora; and Danielle Marcelle Bond deployed her rich, plummy mezzo to fine effect as the Duchess.

Jonathon Moore directed a wonderfully varied, purposefully spare, exquisitely stylized production. The total use of the space, the dropped hints of the character identities, the inexorable path to a cataclysmic denouement, all were beautifully realized. While each of the performers made the roles their own, Mr. Moore’s greatest gift may have been in forging an ensemble that was tireless in its unified purpose. The director was certainly aided mightily by the design team.

Alan E. Muraoka’s set design consisted of a large platform placed in the middle of a thrust configuration, capable of being under lit, over lit and every sort of “lit” by David Jacques, whose lighting was a wondrous mix of overall atmospheric washes, variegated colors, and telling specials. Back to Mr. Muraoka, his stylized upstage hanging suggested a skeletal seaside colonnade, and I enjoyed the mid stage platform that rose and fell to become, among other things, a dining table. The careful selection of simple set pieces that could be added or subtracted by a commendable corps of supers was all that was needed to make the effects required. 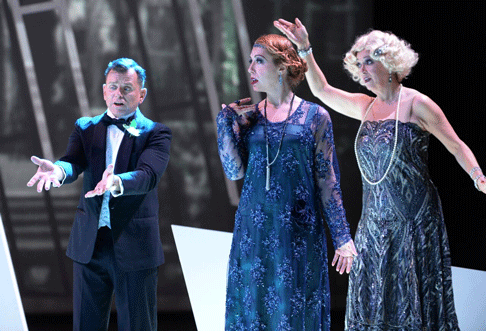 Conductor Andreas Mitisek led an assured reading of this knotty score, and his orchestra, sequestered stage right played with enthusiasm and commitment. Maestro clearly believes in this (and other) new work, and his dedicated leadership invested the evening’s music making with passion and clarity. So, what about the work itself?

If you like your opera tuneful and lush, you will probably find yourself at the wrong address. Mr. Copeland seems to relish rhythmic motifs more than lyric motifs, although they do occur. Vocal writing is most often suitably angular. The churning, forward musical motion rarely relaxes, but it is quite fascinating in its insistence. There are indeed also moments of serene, layered, ethereal repose that are all the more effective for the aural chaos that precedes them.

The percussive effects are many, and occasionally obscure the singing, and pretty much the rest of the orchestra. A bit of restraint in the “thunder and lightning” would likely benefit the overall result. Perhaps Maestro Mitisek could impose some volume control in coming performances. I do wish that Faustine had been given an entrance arioso to help establish her magnetism that is so important to the story thread.

That said, there is no doubt that the writing admirably serves the script in weaving an absorbing look into a specific, inscrutable tale that was staged with utmost care and dedication. While this piece may never bump your favorite Puccini off the play list, it is an important and intriguing new work that deserves attention.