Mr. HonorÈ has reduced his Lyon Don Carlos to some sort of obscure theater metaphor. Thus basic scenic accoutrements and machines of an empty stage are the environments wherein the complexities of Phillip II’s filicide, uxoricide and amicicide unfold.
For the Fontainebleau forest there were some theatrical drapes and a dense, very dense fog of choking theatrical fog and not very much theatrical light. For Saint-Just there was another plane of theatrical drape and not much light, but there was a stage floor trap open to somewhere below. The masquerade was an orgy, theatrical drapes moving back and forth, hide and seek, peeking at couplings (sexual) certainly not that public during the Spanish Inquisition.
For the auto-da-fe the stage became an old raw wood theater, the Spanish court, the Flemish supplicants, and the Madrid populace stuffed into a side wall of boxes, the heretics (four total) were twitching architectural detail. Phillip II’s bedroom was a variation of the raw wood theater structure whose side boxes served to hint at cloister for the Grand Inquisitor. The stage was an empty black box for Rodrigo’s death in Carlos’ cell. 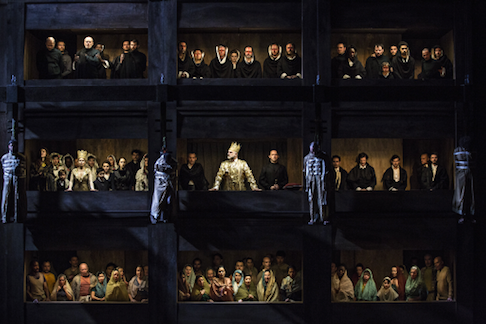 The Auto-da-fÈ
Back in Saint-Just the floor trap was again open to allow the entrance of incarnate Carlo V ashes in the form of a sort of walking cherub with a lighted breast plate. There was a scenic coup de theatre to let us know something had happened (what?) when a panel of drapes fell to the floor revealing a huge, seated blue madonna.
The evening was divided into two two-hour segments. At first we sat patiently during the lengthy minutes it took to cobble, and re-cobble together these set changes, and then impatiently in disbelief at such conceptual, indeed abusive ineptitude.
The edition was cobbled together as well. Among other machinations a part of the ballet was restored. Given that Ferrando had showered before his tryst with Fiordiligi back in Aix we knew a water feature would come. Voil‡! The four soon to be immolated heretics fought and frolicked under an inexplicable shower of water as the ballet music chugged on. These four dancers appeared a final time laid out in Phillip II’s study during his famous soliloquy. 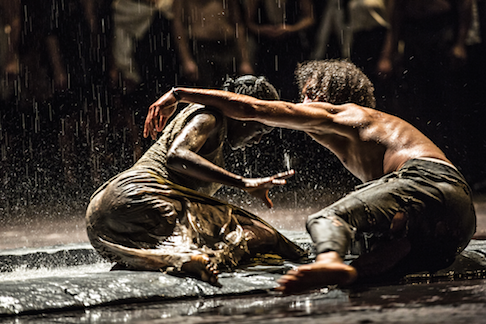 Two of the four heretics in the shower
Mr. HonorÈ embellished his concept by confining Princess Eboli to a wheel chair. French mezzo Eve-Maud Hubeaux is a lyric mezzo whose presence is non-threatening even without a broken leg. Her Eboli was of an engaging comic energy. French baritone StÈphane Degout is a quite lyric baritone as well, conferring a youthful naÔvetÈ on Rodrigue (Posa) that precluded a poetic gravitas we might expect from the opera’s one sympathetic personage. The easy energy of these two performers made them audience favorites.
Russian tenor Sergei Romanovsky carved a plausible Don Carlos, his light lyric voice responding to this character’s presumed epilepsy, though his swoon before Elisabeth found none of its magic. But this Don Carlos could not plausibly challenge his father. British soprano Sally Matthews has a significant wobble in her low and medium register evoking a maternal rather than romantic presence. She did find some convincing phrasing in her high voice that made her “Toi qui suis la nÈant” (Tu che la vanita) one of the few dramatic successes of the evening.
Italian bass Michele Pertusi as well captured some of the sublimity of phrasing in Phillip II’s “Elle ne m’aime pas” (Ella giammai m’amÚ) though the dignity of this scene dissolved into a dry anger that permeated his character start to finish. Italian bass Roberto Scandiuzzi was a warm voiced, bland Grand Inquisitor, though the night before he had created a dynamic Banquo in Macbeth.
With the conceptual, directorial and casting malaise of the production it was difficult to access the contribution of the pit to the evening. The OpÈra de Lyon orchestra put forth some beautiful sounds, notably in the strings. Conductor Daniele Rustioni did indeed support the few successful moments of the evening with stylistic precision.
It was a long, very long, too long evening in Lyon.
Michael Milenski